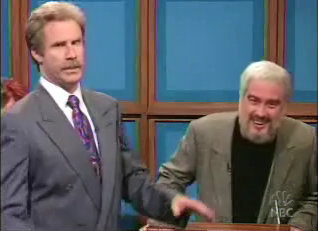 "Of course we're considering parts of the proposal." "Really?" "No, but I considered parts of your mother last night!"

I, like pretty much everyone else, said that the MWC might as well have asked to hold the national title game on the moon. The proposal has no chance of being accepted in its entirety, and that fact has not changed a day later.

ACC commish and BCS coordinator John Swofford did promise that it wouldn't be "dismiss[ed] out of hand," but everyone thought that was him just trying to be diplomatic. None of it is going to see the light of day right?

Then this came across the ol' RSS reader: "BCS considering parts of MWC proposal." Wha?

Oh wait, they're actually only considering one part: the selection committee. And by "they," the article meant only Swofford, since no one else from the BCS committee has publicly commented on the proposal.

Now that I think about it though, using a committee might have a chance at passing. Athletics directors will be a major part of the process of considering the proposal, and they almost certainly would form the pool of potential selection committee members. Instant incentive right there. Using a committee would also solve the major problems with the BCS formula, such as:

So my initial, owlish reaction turned out to be well founded. Even if we can assume that Swofford is speaking for the whole group in attendance at the BCS meetings, they're really only considering the smallest and least consequential part of the MWC proposal. There also is the matter of the 120 I-A presidents, a majority of which will need to be convinced to vote for any tweaks, and they're about as receptive to change as a toll booth basket filled with cement.