Share All sharing options for: East Coast Bias and How the Pac-10 Can Improve Its Reputation (According to an SEC Guy)

Recently chowder, a Cal Bears fan, made a visit to Track ‘Em Tigers to get Auburn fans’ (and by proxy, SEC fans’) opinions on the Pac-10 and related issues. It sparked some great discussion, and it got me thinking about a few things too.

The first thing he asked about was east coast bias. He mentioned that the population distribution of the US and time zone differences led to greater media coverage of eastern teams. That much is probably fair, though the distribution of the Div. I-A schools has more to do with it than population.

You can find fans of any big school just about anywhere. For instance, I regularly see a particular car here in Charlotte, NC with an Oregon sticker on the back. The population isn’t really the issue.

Of the 11 I-A conferences, only three have the majority of member schools in the Mountain or Pacific time zones. In addition, only 11 BCS schools (the Pac-10 and Colorado) are that far west. 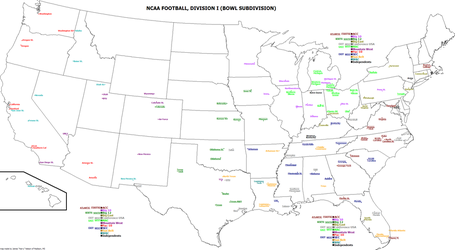 The colored text is the names of all the I-A schools positioned in those schools' locations. Note how much white space there is in the western half.

If every school got precisely the same amount of coverage, there would be more attention paid to teams in the Eastern and Central time zones. To balance coverage geographically would actually result in a west coast bias (which is no balance at all). This isn't an east coast bias at work; this is simple math.

Chowder then asks whether that affects recruiting, the idea being that recruits will want to go to the teams that get more coverage. I would answer that two ways.

First, this is the part where population distribution comes into play. Most recruits don’t go that far away from home, so it’s going to be a tough sell regardless to get recruits on the eastern seaboard to go out west.

And even though the state of California is a gold mine for recruiting, as Florida is in the east, the west doesn’t have states like Georgia, Pennsylvania, and Ohio which are nearly as good per capita. Even so, the western states have fewer I-A programs to supply talent to than the eastern states do, so I have a feeling it’s a wash in the end.

Second, coverage follows the best teams and the loudest fan bases. No one used to give two paragraphs all year to Wake Forest, but ever since Jim Grobe started winning some games, the Deacons have become an integral part of every ACC discussion. Want to know why everyone talks about Notre Dame even when they suck? It’s because there are a million Notre Dame fans out there who drive page views and Nielson ratings.

Coverage alone doesn’t drive recruiting anyway. No one has gotten as much negative press over the last couple years as Ohio State has (because of its back to back title game losses), but it reeled in the No. 3 recruiting class according to Rivals. North Carolina gets a lot less coverage than the western power teams like Oregon and Cal do, but Butch Davis took home the No. 9 recruiting class.

The Pac-10 is not generally thought of as one of the toughest conferences year in and year out in these parts, but that can change. It’ll never pass the SEC in SEC country, of course, but no one will. Here’s how it can move up the pecking order.

Someone must take down USC.

I don’t know all the nuances of Pac-10 football, but I’ve seen enough "U$C" and "TrOJans" comments to know everyone hates USC. It’s not like no one is trying to beat them, and if Dennis Dixon hadn’t have gotten hurt in 2007, Oregon probably would have pulled it off.

It’s not that USC has to fall off into mediocrity, but someone has to rise up and take the Trojans down. I’m not talking about what Oregon State could have done last year, which is win the conference in a tiebreaker while getting waxed out of conference by Penn State. It has to be a team where the nation says that yes, they’re better than USC.

When one team dominates a conference so much, that conference tends to fall in the eyes of the country. No one gave a rip about ACC football when FSU was winning it every year, and it’s no surprise that the Big Ten’s reputation began to fall when it became Ohio State’s league to lose every season.

There has to be balance at the top. The Big 12 may be dominated by Oklahoma, but Texas is always right there and it broke through in 2005. The collapse of the North division kept it down on the pecking order for much of the decade, but Missouri and Kansas showing signs of life recently helped bring it back up.

The SEC stays on top by having balance among the quality teams. In the last ten years, five different teams have won the conference, although Alabama and Auburn only won it once apiece. It’s mostly been Florida, Georgia, and LSU running the show.

Meet your conference overlords: the only teams to win multiple SEC titles since 1999.

Even so, no one has repeated as champions since Tennessee in 1997-98, which creates the appearance (if not the reality) of balance. Not everyone in the Pac-10 has to be a contender–only seven of the 12 SEC teams have even made the conference title game–but it can’t be a monopoly.

Another thing to add to the list is that someone besides USC has to win a national title. The only current Pac-10 teams besides USC to even win a share of a major national championship in the modern polling era (defined as an AP, UPI, or Coaches title from 1950 on) are UCLA, who got the UPI title in 1954, and Washington, who got the UPI and Coaches’ titles in 1991.

Finally, the Pac-10 must get two teams into the BCS in a single year again. Yes, I’ll recognize that it probably should have in 2004 when Mack Brown’s campaigning got Texas to jump Cal by the slimmest of margins. Still, it’s been since 2002. The conference has a good record in BCS games (9-4, though just 3-3 when you take out USC), it just needs to get more teams in.

If I was a general Pac-10 fan I’d pin my hopes on Chip Kelly at Oregon. I see the largest potential for consistent greatness from him, with Oregon State and Cal making runs at the top every couple of years. Dennis Erickson is probably good for one or two more runs at Arizona State, but I wouldn’t bet on much more than that.

Dethroning USC should be the first priority. Right now, the Pac-10 is seen as USC and the Nine Dwarves, and until someone knocks the Trojans off their perch, that’s not going to change.