What Can We Expect of the SEC's First Year Coaches?

Share All sharing options for: What Can We Expect of the SEC's First Year Coaches?

It's no secret that the SEC tends to recycle coaches.

Three of the current guys (Nutt, Saban, and Spurrier) once worked as head coach at a different member school, and one of the 2008 casualties did the same (Tuberville). Perhaps that's why it almost feels weird this season that none of the three newcomers have been head coaches in the league before.

Granted, Gene Chizik and Dan Mullen were coordinators at other conference schools. However, those two and Lane Kiffin have yet to coach an SEC game as the guy in charge.

How they will end up performing is highly dependent on the current state of their programs. Even so, I went back and looked at each of the nine SEC head coaches with at least a year under their belt (plus the three newbies' predecessors) to see if there's a pattern of how things work in each's first year in the league.

I simply looked at winning percentage in their first SEC season and the coaches' overall record at BCS schools. So for instance, I included Rich Brooks' years at Oregon and Steve Spurrier's years at Duke in their overall marks. For Bobby Petrino, I included his season at Arkansas and his two at Louisville after the Cardinals joined the Big East. 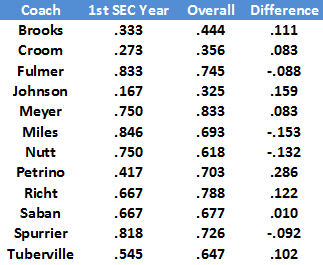 Of all of the coaches, only four of the twelve had a better winning percentage in his first year than he had overall.

In the instances of Fulmer and Miles, they came into programs that were already successful but whose coaches left for reasons other than poor performance (illness in Fulmer's case, NFL aspirations in Miles'). Spurrier also walked into a good situation at Florida, where his predecessor left thanks in large part to NCAA sanctions. Spurrier's initial .818 mark is also almost identical to his .817 overall record at Florida alone.

Houston Nutt is the only one who came in and immediately revitalized a program. He won nine games in his first season after back-to-back 4-7 seasons under Danny Ford. If not for a fumble by the Milkman, the Razorbacks would have won ten games and the SEC West outright.

The seven of the eight remaining coaches were noticeably worse in their first SEC season than they were overall. Nick Saban was nearly the same in both, but everyone else was at least a game out of 12 worse than their overall records.

Part of that has to do with the fact that the programs they took over were not exactly in top shape. But another part is that it's tough to win in the SEC period, and it takes some time to adjust.

All three new coaches are not only walking into depleted talent zones, but they are going to places immensely unhappy with the way 2008 went. Based on this recent history, it's not likely they'll set the world on fire this year.

It's also not likely they'll peak next season either. Among the guys whose first years were better than their records overall, all either matched or surpassed their inaugural win total later in their careers. And even within the group of those coaches who ended up fired, there was still improvement to come beyond the first year.

Chizik, Kiffin, and Mullen will almost certainly have to take their lumps this fall. They'll lose more games than they want to and will turn in a winning percentage below what the fans want. The upshot for those Tiger, Vol, and Bulldog fans though is that things will almost certainly be better in 2010 and beyond.