Last offseason, I took a look at various coaches' records on my personal site. This year, I'm going to go through the SEC coaches with a couple years of conference head coaching experience, updating anything I did last year and adding some more to it.

It's going to go in a pseudo-random order, and first up to bat is Georgia's Mark Richt.

With 82 wins to his name, Georgia's Mark Richt has the potential to be the winningest coach in Bulldog football history. He's just 49 years old, and given his average clip of about ten wins per season, he will pass Vince Dooley at around age 61 or 62.

He's drawn criticism every now and then for not winning a national championship, but his 13-1 team in 2002 would have won a national title in nearly every year of the BCS except that one. More pressing is his 2-6 record against rival Florida, but he's also a combined 12-4 against his other rivals Auburn and Georgia Tech.

The following stats about his record do not include his five wins against I-AA teams, so keep that in mind when the win totals don't add up to the full 82.

This is what Richt's record looks like broken down by site:

Surprisingly, Richt actually does better on the road than he does at home. The neutral site record consists of Florida-Georgia games and his SEC title game appearances. We can also see a good track record at getting his teams ready for bowls.

This is what Richt's record looks against four tiers of opponents. The first tier is teams with end-of-year winning percentages of at least .750. The second tier is from .500 to .749 and so on.

Funnily enough, his teams average more points against second tier teams than third tier. We can also see that, though his record is a few games below .500, his teams actually outscore his first tier opponents on average.

If you're curious, the one loss to a third tier team was the 2006 loss to Vanderbilt.

Now comes the part that is new for this year: a year-by-year look at each coach's so-called Pythagorean wins. I learned of the Pythagorean expectation from Roll Bama Roll's outsidethesidelines, and he applies it to conference games each season. For this, I included all I-A games each year.

Basically, Pythagorean expectation tells about how many games a team should have won given the number of points for and allowed, and it is usually very accurate. I used the exponent 2.37 that Pro Football Reference divined instead of just two. If you're curious about the exact formula, hit that link in the previous paragraph.

The difference between Pythagorean wins and real wins is often termed "luck," but "chance" is probably a better term, and it can also be considered a measure of if a team overachieved or underachieved in a season. Here's Richt's Pythagorean wins by year: 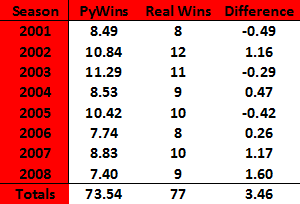 Richt's 2002 team overachieved by more than a full game relative to expectation by either being good, lucky, or a combination of the two. There's absolutely nothing wrong with that either because often times it takes a season where the stars align for you to end up with a 13-1 (or similar) record. Just look at the 2003 team which actually had more Pythagorean wins but that ended up 11-3 thanks in large part to having to play 13-1 national champion LSU twice (both losses).

Differences of less than a game aren't all that much to get worked up about, but look at the last two years. Georgia overachieved by more than a game in 2007 and over a game and a half in 2008. It goes to show what offensive line injuries and defensive breakdowns should have done to the Bulldogs, and what a great job Richt, Stafford, and Moreno did to overcome them.

Since Pythagorean wins are often a good indicator of the future, it looks like 2009 could be a rough year for the rebuilding UGA program. They haven't broken the nine-win mark since 2005. However, Richt has overachieved more often than he hasn't, so it's probably a good bet that Georgia will win a game or two more than it should.

Fancy stats aside, it's hard to make the case that Richt has been anything other than a runaway success in Athens. He's a genuinely good guy who generally runs a clean program. He also happens to have far and away the best winning percentage of any Georgia coach that stayed for longer than three seasons.

The Georgia job is his for as long as he wants it, and it's hard to see him going anywhere else. Mark Richt and Georgia are a near-perfect fit, and the two will be together for quite some time into the future.