Day after the Draft. A little bit here and there on the players who went high. Year 2 has your free-agent signings here.

Matthew Stafford rolls out his Top 10 draft-day thoughts for David Letterman. One of the unlisted ones better have been "Can I get another makeover from Maria Sharapova?"

Cornelius Ingram comes to Percy Harvin's defense -- after Harvin is already drafted. Which seems a bit late. In any case, he says the criticisms of Harvin are unfair "to a certain extent." Hooray equivocal endorsements!

Yes, the SEC had the most picks in the NFL Draft -- but the ACC had the second-most. So read into that what you will.

For some, it's already time to look ahead to 2010. Swamp Things has Tim Tebow going in the first round.

You mean to tell me Matthew Stafford and Mark Sanchez will be that much better at the next level than Tebow? I know the throwing motion scares people, but Stafford threw 30 collegiate picks and Sanchez had a decent -- nothing more, nothing less -- one season as a USC starter.

What did he do, drink after Lane Kiffin? Urban Meyer had some fascinating insights in his latest visit to the Central Florida Gator Club. To wit:

"We want former Gators to come back, but loyalty's a two-way street. If you want to be critical of a player on our team or a coach on our team you can buy a ticket for seat 37F, you're not welcome back in the football office.

"You're either a Gator or you're not a Gator. It's real simple. For those who are not Gators keep buying tickets, critique, but if you're a real Gator, get to know our players. Let's enjoy the greatest era not just football of Gator athletics."

Urban, a bit of friendly advice: Stop using "greatest" and "era" in the same sentence. It just doesn't work for you.

"We're evaluating Gator clubs, everybody wants to evaluate me. I'm going to evaluate you. We've cut our Gator clubs down because it's very important I'm a father. We want to go to the best.

"For example, I've been to some horrible Gator clubs with a couple hundred people. They hand me a mic like I'm Johnny Carson. We're not going to do that. This is the way it's supposed to look. We're not going to places that aren't very good anymore."

Johnny Carson's got nothing on Urban Meyer. How many national championships did he win? And did Carson look as good in a leather jacket as Meyer does? I thought not.

That's, um, special. Auburn's brilliant new idea -- send all their assistant coaches to the same recruiting stop at once! In a tricked-out limo! 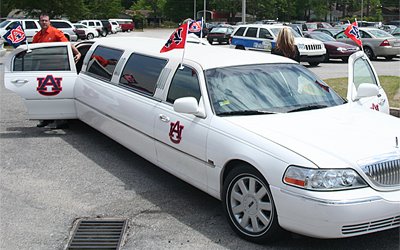 Now, I'm no mathematician. But it seems to me that you would have more of a strategic advantage by send each of the seven coaches to different places, no?

What do the Vols and the Tide now have in common? The wrath of Brian Cook. Observe:

Lane Kiffin caused defections at Tennessee are up to a spectacular nine now, which is a lot more folk a lot faster than Rodriguez "ran off," to use the parlance of people who don't know what they're talking about. ...

Relevance to Michigan? Slight. I guess he's taking a lot of heat that might otherwise be directed at Rodriguez.

For those of you who don't remember mgoblog's classic war with Roll Bama Roll, you're far better off than the rest of us. But it started sort of along a similar track -- Rich Rodriguez was taking heat, but Saban wasn't taking heat for this trangression, etc. In any case, Vols fans, I'm sure Todd has plenty of ideas for how to strike back at Brian, if you're so inclined. Granted, I'm not quite as sure that Tennessee fans are as -- what's the word I'm looking for? -- rabid passionate as Alabama fans, so we'll see what happens.

Just confirming what you already knew. Larry Munson is headed to the National Sportscasters and Sportswriters Association Hall of Fame. Well, duh.