NCAA nears goal of making world's dumbest decision. A coach wants to attend the graduation of a commitment, exactly the kind of academic focus of which the NCAA speaks so highly. So what happens when the coach thinks about applying for a waiver so he can attend and stay within the rules?

Why, the NCAA indicates the request will likely be turned down, of course.

Granted, this isn't quite as bad as it first looked -- after all, Chris Burnette did miss being valedictorian, the original terms of Richt's promise. And a mere 5.12 GPA for a student whose made all As his entire academic career is clearly not worth waiving the rules if he's not officially, valedictorian, right?

Sadly, the sarcasm is all that comes to me. When it comes to mindless NCAA decisions, I ran out of outrage a long time ago.

The Mayor gets contrary about the NFL Draft. Everyone's wordiest Georgia blogger rebuts the argument that the NFL Draft doesn't show the SEC's greatness because it's not that great on a per capita basis.

It's really worth reading the whole post, but I'll pull out one and a half paragraphs to illustrate my problem with the Mayor's generally strong argument, which is based on the idea that colleges in the same conference generally draw from the same pool of recruits.

If Georgia, Florida, and Tennessee all keep scholarships available in the hope of snagging the same upper-echelon recruit, two of those schools are going to be disappointed when the kid dons the wrong cap on signing day. The two extra scholarships that leaves aren't going to be expended on equally upper-echelon recruits in the same recruiting cycle; they're either going to go to lower-tier players who are still available, or they're going to be held onto for next year's recruiting class.

Either way, they're not affecting the total number of top-shelf recruits entering a particular conference's member institutions in a given year. Absent early defections (which tend to even out over time), we're still talking about the same number of highly-touted athletes entering the N.F.L. draft from the ranks of a given league. On the individual level, recruiting always is a zero-sum game, but, at the highest level, this is especially so; one team's getting a five-star holdout on signing day means the other teams pursuing the same kid aren't getting any five-star holdouts on that signing day with that scholarship.

First off, I'm not sure I would have spent this much time dissecting points made by two bloggers whom I respect, but who both spend an inordinate amount of time trying knock down any notion that the SEC is the nation's best conference. (And one of whom takes a gratuitous slap at Southern intellect in his post.) "Nobody talks so constantly about God as those who insist that there is no God," Heywood Broun once said, and the same seems to be true of SEC superiority. But I digress.

The real problems I see with the Mayor's argument are:

(1)  The scholarship of a lost five-star recruit isn't necessarily "going to lower-tier players who are still available." It might very well still end up going to a talented player, particularly if a five-star recruit commits early in the process or if a school (as some do) over-recruits. coughcoughOleMisscoughcough
(2) Even if the team does turn to a lower-tier player, it is not a given that this player is not going to turn into an NFL-caliber player. The odds are longer, no doubt; but not impossible.
(3) It is built heavily on the idea that colleges recruit regionally. But that's not always the case. Florida or LSU or Georgia is just as likely to be competing for the best players with Oklahoma or Southern Cal or Michigan as they are to be competing with Alabama or Tennessee or Auburn -- and perhaps more likely to be going up against the national titans as they are to be fighting Kentucky or Vanderbilt or Mississippi State.
(4) Even if we accept the idea that all schools recruit regionally, neither side of the argument is accounting for the fact that some regions are more populous and/or richer in four- and five-star talent than others.

I'm not saying the Mayor is wrong -- his argument seems at worst to take into account something that mgoblog and Dr. Saturday don't, and at best takes a bit of air out of their arguments.

But I've said before that I regard the NFL Draft as a decidedly bad way of measuring conference strength, whether per capita or in total. I see no reason to change that view -- whether it benefits the SEC or not.

Boy Wonder: Daddy is Superman; Coleman should have stayed. Monte Kiffin is still pretty tough for someone who's 97 years old.

[Lane] Kiffin said his father -- UT defensive coordinator Monte Kiffin -- underwent back surgery a few days ago and was back at work Monday despite being told by doctors to take a week off.

Perhaps more germane for our purposes, Boy Wonder commented on the B.J. Coleman controversy, such as it is.

Later in the evening, speaking to a sold-out crowd, Kiffin added: "We wanted (Coleman) to stay. He really had a slow spring at the beginning and had come around the last couple of weeks."

Are we sure that's Coleman that Boy Wonder is talking about? Because it really could have been any other Tennessee quarterback, if you lop off the "had come around the last couple of weeks" part.

When an Auburn fans accuses you of 'a misinformed cheap shot at Georgia fans,' you're probably wrong. And yet Terence Moore manages to draw that reaction from The Joe Cribbs Car Wash in response to his final column.

Yes, I know the last part of that sentence is a crushing blow to many of you. But he left a special, mind-boggling gift for you at the end of his last missive.

In football, the Bulldogs had a national championship in 1980, and the Yellow Jackets managed one 10 years later. Neither has come close since then.

So, yes, they have come close since then. Many, many times.

Anything I say here will get me in trouble. So let me just introduce, without further ado, TeeBows. (Borderline NSFW) That would be Tim Tebow-inspired ... 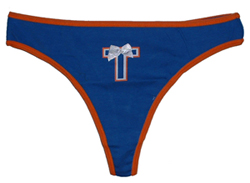 It's tennis. Apparently, Mississippians take their college tennis very seriously. You have no idea how seriously until you consider the reaction of Ole Miss athletics director Pete Boone to the perceived snub of the Rebels in the seeding for the NCAA tennis tournament.

"There's no words that can express the boneheadedness of this decision. It's truly beyond comprehension. The NCAA wants to cut down on travel, and I understand that, but to do this to the No. 2 team in the country doesn't make any sense whatsoever. I'm sure the decision-makers got in some room and started dealing with theory and then convinced themselves that this made sense when it reality it makes absolutely no common sense. We're certainly going to be on the phone in the morning with the NCAA trying to find out what the hell happened."

Our friends at the Red Cup Rebellion have decided to declare war via e-mail and phone. Yikes. Does McEnroe even get that angry over tennis?

Wind Sprints. Jevan Snead will be your No. 1 NFL draft pick. Next year. After, you know, the season is actually played and everything ... The Kickin' Colquitts, now likely to play against each other ... Georgia seeks a "neutral game" in the Georgia Dome. Because everyone will fall for that one ... Steve Spurrier "starting to agree with" NFL types on the importance of a quarterback. Now?!?