As the BCS Fight Turns

Share All sharing options for: As the BCS Fight Turns 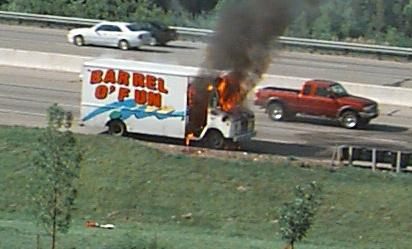 The BCS, summed up in one picture. But it was supposed to be fun, we swear!

The BCS meetings are going on right now, and it's the MWC's turn to present a playoff proposal.

Florida president Bernie Machen presented one to the SEC after the 2006 season, and Georgia president Michael Adams called for one after the 2007 season. The BCS committee shot down a plus one scheme last year as well.

The BCS is under more fire than it ever has been, what with vocal opposition to it coming from coaches, administrators, and elected officials. It has an antitrust lawsuit coming against it as well, courtesy of (surprise!) the attorney general of Utah.

ACC commissioner and current BCS coordinator John Swofford says the Mountain West's proposal won't be "dismiss[ed] out of hand," but I don't know anyone who expects anything to come of it. The conference wants an eight team playoff with the participants chosen by a basketball-style selection committee. Good luck with that in a world where change only comes incrementally.

Rep. Joe Barton of Texas feels the time is right to press forward with his anti-BCS bill in Congress, and President Obama has personally guaranteed three times that he'll sign it into law if it passes. (H/T: the OS).

I personally think he's right since at least right now, I expect Florida and Texas to run the table and play for it all. Nothing is a more effective antidote to BCS controversy than having the nation's only two undefeated teams meeting in the national title game. To keep the flames a burnin', we'd need at least one other team (USC? Boise State?) to run the table too, and it's not a great idea to count on having more than one or two undefeated teams in a season

In the spirit of full disclosure, I have been for an eight team playoff for quite some time. The pragmatist in me has lately been drawing me towards supporting nothing more than a plus one though. Regardless, you can also plant me firmly in the category of believing that at least a plus one is inevitable. It's only a matter of time.