Share All sharing options for: Charting the SEC in 2011

Because this annual ritual needs to get done before the season starts, I have finally done my charts of where the SEC was in 2011. You can see these charts for 2007-08, 2009, a national look at 2009, and 2010. The values used here are solely from SEC play and do not include non-conference or bowl stats.

SEC teams scored an average of 22.49 points per game and gained an average of 323.57 yards per game. Those are both well below 2010's averages, as they're about four points and 52 yards lower. They're in the neighborhood of the averages from 2008, a season in which the average team scored 22.77 points and gained 320.18 yards per game. Florida's offense was awesome that year, but Alabama was the only other team to score over 30 a game. That was also the year when Auburn and Tennessee made disastrous hires in Tony Franklin and Dave Clawson, Kentucky slumped without Andre' Woodson, and Sly Croom got fired for putrid offense.

The 2011 averages represent the axes on the chart. The center of each logo corresponds to each team's average points and yards per game. 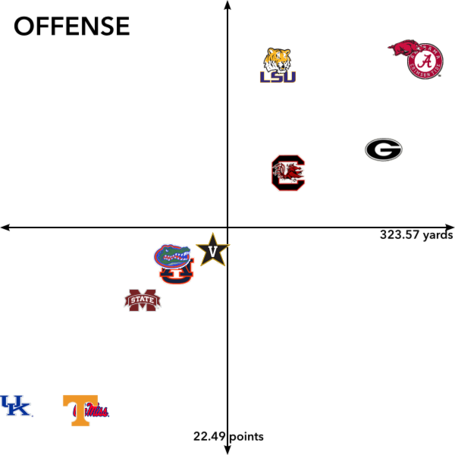 Alabama and Arkansas were pretty close, believe it or not, while LSU, Georgia, and South Carolina were the other three schools that managed to be above average in both yards and points per contest. The conference had two clumps that the rest fit into. One is a slightly below average set with Auburn, Florida, Mississippi State, and Vanderbilt. Vandy comes out looking the best here, but bear in mind that the Commodores didn't face either LSU or Alabama. The other clump was a trio of putrid teams that scored between 11.50 and 11.75 points per game; the only real difference between them was how many yards it took them to get that paltry amount of points. Tennessee is a trendy pick to have a good offense this year, but if it comes through on that expectation, it will be a monumental turnaround.

This is a far cry from 2010, when we had Auburn and Arkansas way up in the top right, Vanderbilt was in the bottom left, and everyone else was clumped in the middle.

The averages for points and yards per game are identical to those from the offensive chart, because a point scored or yard gained for one team is a point or yard allowed by another. The scale on this one is slightly smaller on this chart than on the one above because, while the averages are the same, the range between the best and worst was larger. 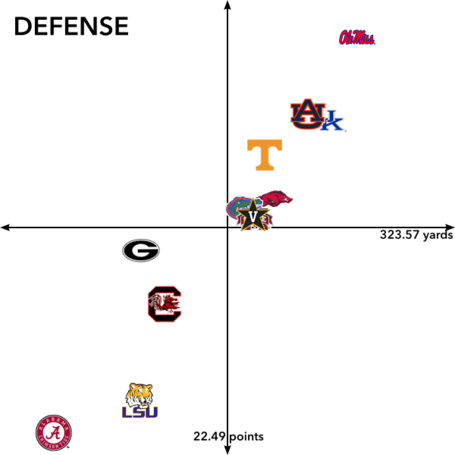 All of the focus last year was on Alabama and LSU as a set, but Alabama's defense was noticeably more stingy than LSU's. It gave up two points fewer per game and 77 yards fewer per game than the Tiger defense did. You can see that there is a clump just to the northeast of center with Florida, Mississippi State, and Vanderbilt; if you take out Alabama, all of them suddenly have an above average defense. Bama's defense being so dominant is why the scale of the chart had to change here, although the awfulness of Ole Miss's defense gets an assist in that effort.

Aside from the big two, only Georgia and South Carolina had defenses better than average on the season. This should come as no surprise. Three of the top five offenses in both points and yards per game belonged to Alabama, Arkansas, and LSU, and Georgia (LSU) and South Carolina (Arkansas) played only one of them apiece. The other two teams in those top five rankings were UGA and Carolina themselves, so that's another one off of the list you can scratch off. Avoiding three of the top five offenses in the league will help your numbers, especially in Georgia's case where it had an extra game so to speak (against a Mississippi school no less) to keep the averages down. 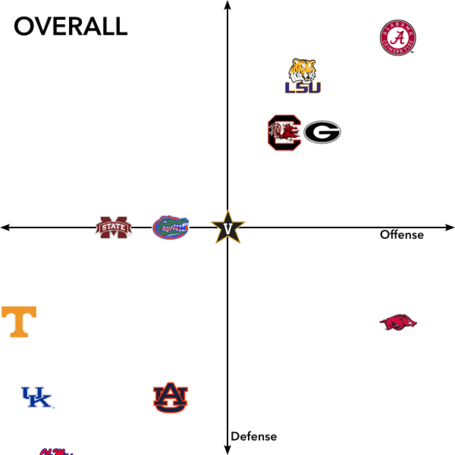 Here we see that only four teams were above average in both disciplines, and appropriately it was the top two in each division. Vanderbilt ended up perfectly average in both. While Vandy also gets the "didn't play LSU or Alabama" caveat, this is also Vandy we're talking about. To show up that well regardless of schedule is a tremendous step forward. In 2010 and 2009, Vandy's logo didn't even fully appear on the chart due to how bad its offense was.

Speaking of not entirely fitting on the chart, that's where Ole Miss finds itself by having the singularly worst defense in the league. It is unusual that no one ended up in the upper left quadrant where teams with above average defense but below average offense lurk. Since I began doing these for the 2007 season and on, there have been at least two teams up in there. No one with a subpar offense was able to counteract it with above average defense, and that's kind of an odd thing to say for this league.