Share All sharing options for: Charting the SEC in 2010

To brighten up your Monday, I decided to chart where the SEC was in 2010. You can see these charts for 2007-08, 2009, and a national look at 2009 that I did last year around this time. The values used here are solely from SEC play and do not include non-conference or bowl stats.

On average, SEC teams scored 26.53 points per game and gained 375.48 yards per game. That's actually up about a field goal and thirty yards per game above 2009. Those values represent the axes on the chart. The center of each logo represents each team's average points and yards per game. 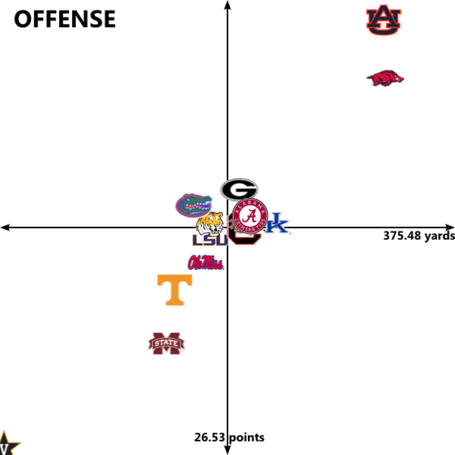 Two teams were way out ahead of everyone else, and it's no surprise who they were. The only real analogue I've got for it in the time span I've been doing these charts is Florida in 2008. A whole bunch of teams are clustered in the middle, with a steady drip of teams falling out the back. In dead, dead, dead last place was Vanderbilt, just like last year. The scale of this chart is actually bigger than last year's offense chart. Had I used the same one as before, Vandy wouldn't be on it at all.

I did want to point out one thing: Mississippi State's offense wasn't all that good. In fact, it regressed notably from 2009. In '09, the Bulldogs were right below the conference averages in scoring and total offense. Last year, they were ahead of only Vandy in both categories. You'll find out soon why MSU had a much better record despite falling way behind on offense, but keep that in mind if you're optimistic about this team's chances in 2011.

Also, Florida comes out above average in points scored despite being ninth in the league in total yards. Special teams and defensive scores will do that for a team. 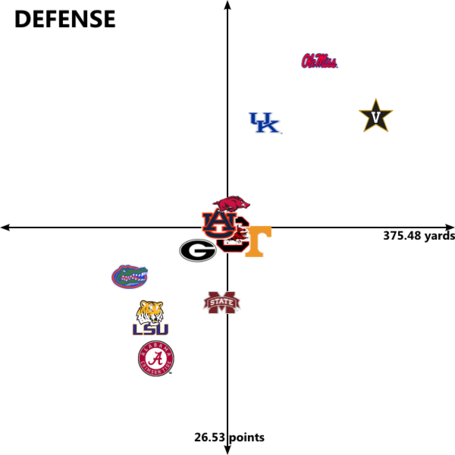 Three defenses were well out ahead of the pack: Alabama, LSU, and Florida. Alabama allowed the fewest points, Florida allowed the fewest yards, and LSU was right in the middle of both of those two in each category. You'll note that Mississippi State, while average in yards allowed, was third best in scoring defense. That's what enabled the Bulldogs to jump up to nine wins: a big defensive improvement.

As with offense, there's the clutter in the middle with a few teams well behind. It's a shame for Kentucky that its defense wasn't better, because its offense was actually one of the better ones in the league. It's also interesting that the SEC East's champ South Carolina came out almost exactly average in both offense and defense. It just goes to show how flawed the other East teams were last year. 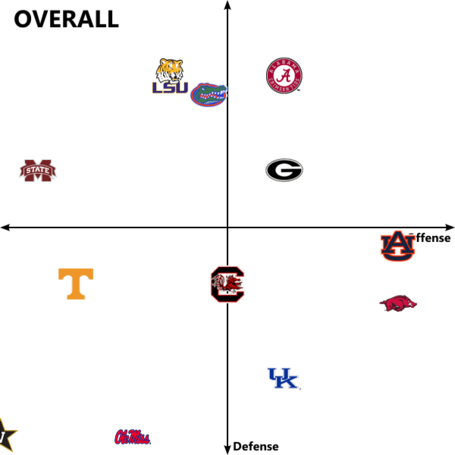 As is always the case with these overall charts, the schools are scattered all around. Interestingly, only two teams came out above average in both offense and defense: Alabama (finished fourth in the SEC West) and Georgia (finished 6-7 overall, 3-5 in conference play). Last year was not a year for balance in the SEC, that's for sure. The only team with a semblance of "balance" that succeeded in the standings was South Carolina, who was average on offense and slightly below average on defense. This fact also underscores the malaise that surrounded Georgia last year. You can't find many justifications in their numbers as to why the Bulldogs finished the year under .500.

This final chart just reemphasizes much of what you already figured. Vanderbilt was hilariously bad. Auburn and Arkansas were elite offenses with mediocre defenses overall. LSU and Florida could have been better with more offense. South Carolina didn't excel at much, but they didn't have many glaring weaknesses either. The one thing that stands out is how mismatched Mississippi State's offense and defense were. Just keep that, and the fact MSU lost DC Manny Diaz, in mind when projecting where the Bulldogs will be this fall.

Commenter jd is legend requested a chart showing the point and yardage margin for the teams. I do take requests sometimes, so I whipped this one up: 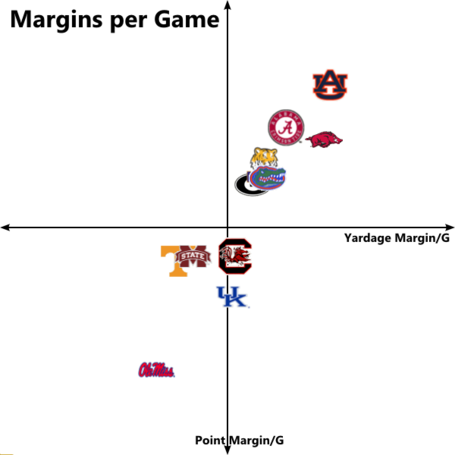 That little line in the bottom left is the edge of Vanderbilt's logo. I had to make the scale quite large in order to get even that much of the logo on there. Here's some perspective: Auburn and Arkansas combined outgained their opponents by an average of 209.6 yards per game. Vandy was outgained by 245.4 yards per game. Auburn and Alabama (the top two in scoring margin) outscored their opponents by 22.8 points per game. Vandy was outscored by 21.9 points per game.

Something to keep in mind in both this and the other charts is that South Carolina had to play Auburn, both the top points and yardage margin team, twice last season. That depresses their numbers notably.