Share All sharing options for: Charting the SEC Nationally

Note: I appreciate all feedback, but I am out on vacation this week and will not be able to respond to any comments or questions. Thanks for understanding.

In the comments and in emails, I got requests to chart the SEC teams against some others nationally. I wasn't originally going to do that because once you throw it open to everyone, you get issues regarding schedule strength, amount of garbage time everyone had, I-AA opponents, and so forth.

But, I got enough requests that I went ahead and charted the SEC schools against 18 others nationally for a total sample of 30 teams. I tried grabbing some interesting ones along the spectrum of both good and bad. Keep in mind though that these charts encompass the raw end-of-year stats, complete with the issues mentioned above. I make no warranty on the value of these charts beyond entertainment value.

The charts this time are bigger to make room for more teams, so click on the image for the full size. 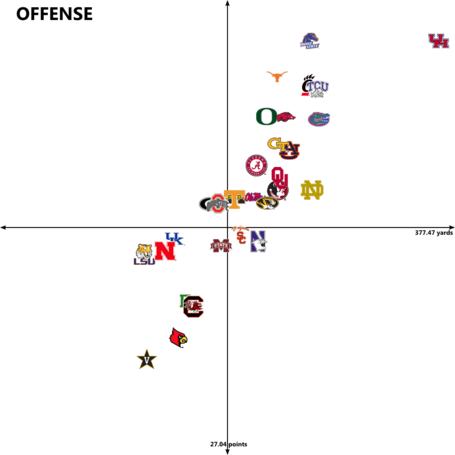 Vandy was really bad, but Louisville wasn't too far off. LSU and Kentucky were pretty near Nebraska, which goes to show how great Nebraska's defense was. Mississippi State and Northwestern were near the realm of USC interestingly enough, and Houston is way up there by its lonesome. Tennessee and Michigan were right on par with each other, as were Georgia and Ohio State. Florida's way up there in contrast to its SEC-only play, but that shows just how badly the Gators beat their cupcakes.

The scale on this one is identical to the offense chart, but the axis values are slightly different. That is because the data set isn't completely closed thanks to I-AA games. 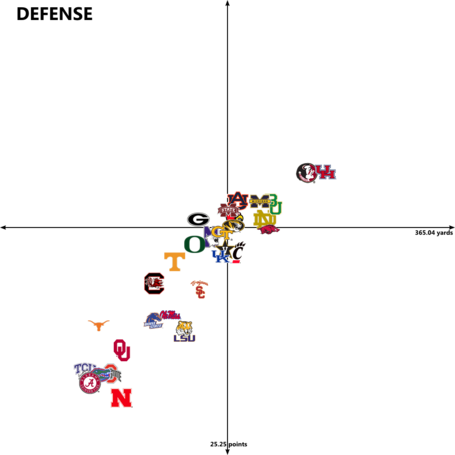 You can see a big cluster of BCS teams there on the lower left, while Texas is kind of above everyone having given up more points. Nebraska was great, and Oklahoma is not that far off from everyone. Had Sam Bradford and Jermaine Gresham not gotten injured, the Sooners would probably have been in the thick of the national title race.

The two USCs were fairly close, while Boise State wasn't as good as you'd figure for having played in the WAC. I have a feeling that garbage time had something, though not everything, to do with that. Also, it's almost sad to see how bad FSU's defense was in Mickey Andrews' last season. That's not the way to go out.