Charting Where the SEC Was in 2009

Share All sharing options for: Charting Where the SEC Was in 2009

In preparation for making my 2010 picks, I wanted to make sure I had a precise handle on where everyone was in 2009. It's been a few months since that season ended, after all.

So to help me visualize things, I made some charts that illustrate where everyone was on offense, defense, and in a combination of the two. Figuring y'all might be interested in seeing them, I present them now. These only factor in SEC play, excluding all non-conference tilts.

On average, SEC teams scored 23.20 points per game and gained 346.08 yards per game. Those values represent the axes on the chart. The center of each logo represents each team's average points and yards per game. 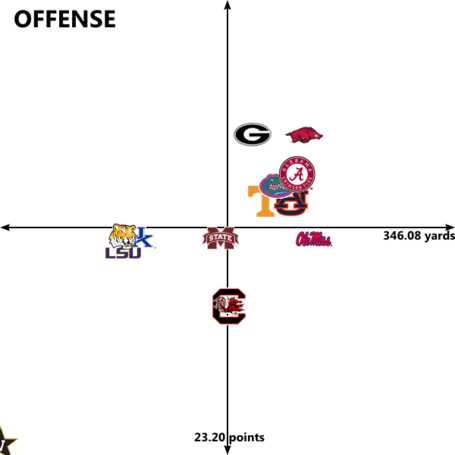 As you can see, an number of teams were clustered right around each other at a little above average in both points and yards. Georgia and Arkansas stand out as the scoring leaders, while Ole Miss was the yardage champ. Mississippi State was about average in both, while South Carolina was average in yards but lacking in points. LSU and Kentucky were nearly identical.

Finally, note that Vanderbilt is barely on the chart at all. That's how far behind everyone else the Commodores' offense was in 2009. I wanted to use a smaller scale to better differentiate other teams, but VU is why I couldn't. It's no wonder that Vandy went winless in '09. 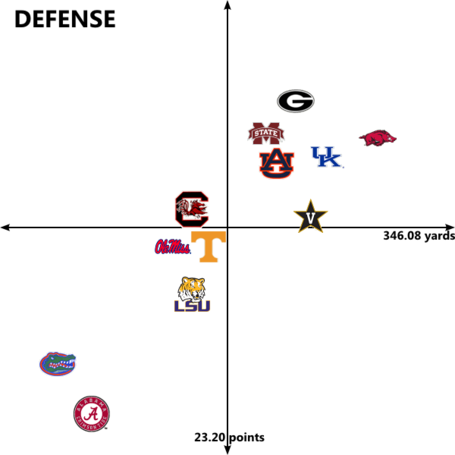 Not surprisingly, the two divisional champs (and national title contenders) were well ahead of everyone else on this chart. Florida allowed the fewest yards per game, while Alabama was the scoring defense champ. LSU was about third, while Ole Miss, Tennessee, and South Carolina were pretty close. Vandy did better in scoring defense than it probably should have.

What's left were the relatively porous defenses. Mississippi State, Kentucky, and Auburn weren't too great and were in some ways around equal, and Georgia and Arkansas stand out as the worst two. When projecting 2010, just keep in mind which of those two overhauled its defensive coaching staff and which didn't.

Also of interest to me is how much more linear the relationship between points and yardage is on the defense chart than the offense chart. The offense one is a bit more noisy. 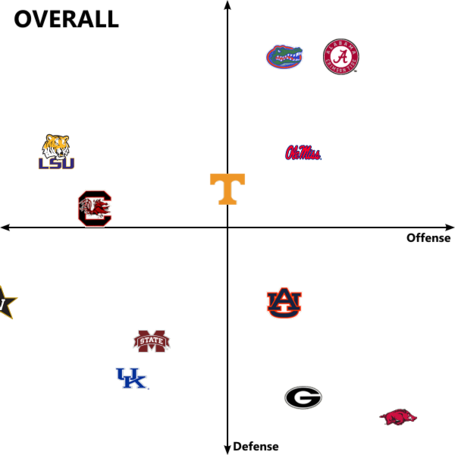 The results are for the most part what you'd expect.

If it hadn't been said already, this shows just what an opportunity that the Rebels missed this year. Their defense was roughly on par with LSU's, but the offense was much better. Yet, Ole Miss was a game behind LSU in the SEC West standings and was even fortunate to be there what with Les Miles's stupid spike call at the end of that game.