Share All sharing options for: Charting the SEC in 2007-08

Since the post from yesterday on the SEC charts for 2009 were well received, I went ahead and put them together for 2007 and 2008 as well. I wanted to have some more to have comparison points, and it's pretty easy to crank them out once you have the first set down.

I'm starting with the 2008 season. The scale on this one is actually larger than the one from 2009 because there was a wider range from minimum to maximum. I'll give you three guesses as to who caused that, but you'll only need one. 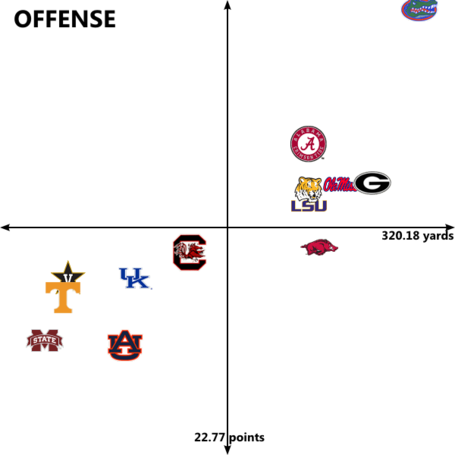 You knew that Florida dominated the conference offensively that season, and now you can see by just how much. Florida averaged 43.3 points per game; second-place Alabama scored 30.6 points per game. Florida averaged 421.4 yards per game; second-place Georgia averaged 396.4 yards per game. It had been a while since a team dominated the conference offensively to this degree, and it will probably be a while until we see it again.

Everyone else had a fairly linear relationship between points and yards. Looking at this, it's no great shock to remember that Mississippi State, Tennessee, and Auburn all fired their coaches largely over offensive frustrations. You can also see a pretty definite gap between the top six and the bottom six.

If you're a Tennessee fan who has repressed memories of 2008 already, you might want to skip ahead to the next section. 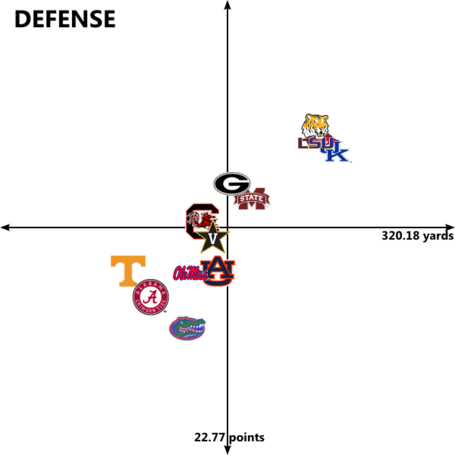 Three defenses were in competition for the title of conference's best: Florida, Alabama, and Tennessee. Two of them played in BCS games. The third didn't even play in a bowl. That's how big a snafu the Vols' offense was that season.

Everyone's a lot more bunched up, as you can see from all the whitespace around the edges of the chart. There were no great outliers on defense as there was on offense. Auburn was also in the realm of really wasting a good defense, and Mississippi State wasn't far off. Three teams lagged the field greatly: LSU, Kentucky, and Arkansas. LSU turned things around in 2009 with the addition of John Chavis. The other two did not.

Again, these are based on average ranks in total and scoring offense and defense. 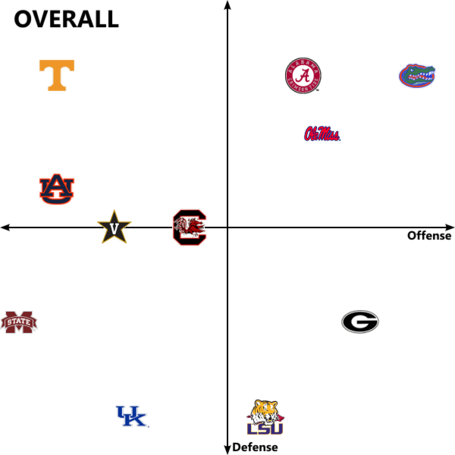 The good, upper right quadrant looks eerily similar to the one from 2009. You've got Florida and Alabama out ahead of everyone, but Ole Miss is sitting there in nice position too. Tennessee is way up there on the left, wasting its offense. LSU and Arkansas (who ended up with the same averages in both) are at the bottom wasting their offenses. South Carolina was pretty average, Kentucky was bad, and the rest were wasting their defenses.

Now hold on to your hats, because we're going back to the wild and wooly 2007 season.

The scale on this chart is smaller than that of the 2008 and 2009 charts. There weren't any big outliers good or bad, so it was possible to spread everyone out a bit. Also keep in mind that this was the last season of the old clock rules, which had returned after a hiatus in 2006, so the average points and yards were higher across the board. 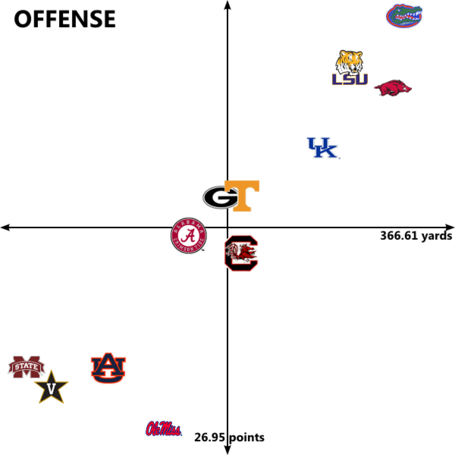 Florida was the offensive champ again, but LSU and the Darren McFadden/Felix Jones show weren't too far behind. Kentucky actually had some life on offense thanks to Andre' Woodson. Meanwhile, Ole Miss was putrid thanks to the incomparable Ed Orgeron.

What's interesting is that three distinct tiers emerged here. Florida, LSU, Arkansas, and Kentucky were the best ones. Georgia, Tennessee, South Carolina, and Alabama were about average. Auburn, Ole Miss, Mississippi State, and Vanderbilt were bad. It's a wonder that two from that last group made bowls, but then this is only half of the story. 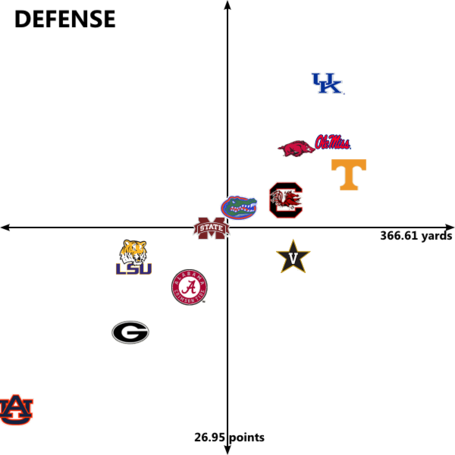 Hello Auburn. That's quite a defense you've got there. It wasn't as far ahead of the mean as Alabama's 2009 scoring defense or Florida's 2009 total defense were, but it's comparable or better than any other unit across the 2007-09 seasons. The disparity between this chart and the last is why Al Borges had to go.

Also making an appearance is a good Georgia defense, the last one any of us have seen. Alabama's D was pretty good, but it wasn't anywhere near what it would become over the past two years. Florida's defense, while the worst the school has seen in some time, is almost exactly at the average point for the league. Kentucky's defense also shows why the Wildcats weren't a real threat to win the SEC East despite the offense. Tennessee looks pretty odd sitting out there, but comparing this chart with the last defensive chart shows how much a unit can grow in just one year. 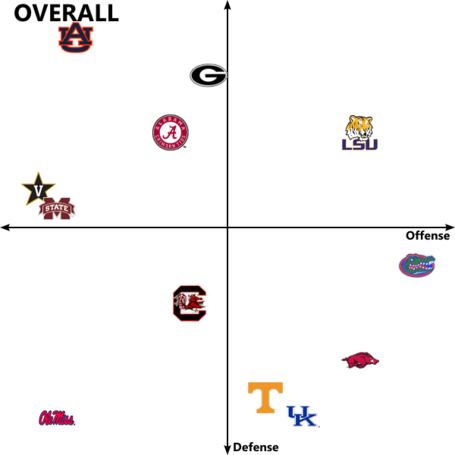 I would have expected Georgia to be there with LSU too, but I forgot just how much of a malaise that team was in during the first half of the season. It's not so much that the Bulldogs were average but that they were mediocre to begin with and great towards the end.  It's also a wonder that Tennessee won the East while ranking far worse in defense than Georgia did (tiebreakers can be a pain) and while ranking worse on both sides of the ball than Florida did (inter-division rotation scheduling, mostly).

I know this was a bit long, but I hope you at least enjoyed the charts. They were fun to make and show things off in a different kind of way that's a bit more interesting to look at than a table of numbers,