Share All sharing options for: The SEC's Overlooked Running Backs

Leading into 2011, nearly all of the attention for SEC running backs has gone to Marcus Lattimore, Trent Richardson, Michael Dyer, and (until recently) Knile Davis. They were the unanimous first and second team preseason All-SEC picks among major publications and SEC coaches.

Two guys who only cracked the third team, if they weren't left off entirely, were Tennessee's Tauren Poole and Ole Miss' Brandon Bolden. They each ended up within 35 yards of 1,000 last year, putting them third and fifth, respectively, among returning players (not counting the injured Davis).

They didn't get too many accolades last year for a number of reasons. All of the focus for both teams was on the quarterback position, either with the Matt Simms/Tyler Bray duel in Knoxville or the Jeremiah Masoli Experience in Oxford. Neither team ended up with that great a record, another factor that tends to depress future hype for great players.

Commenter Caban brought up Poole's boom-or-bust numbers in yesterday's post on Davis and Broderick Green, so I decided to grind them out for both Poole (using my methodology, for consistency) and Bolden to show how they compare and contrast. Click it to make the chart image bigger: 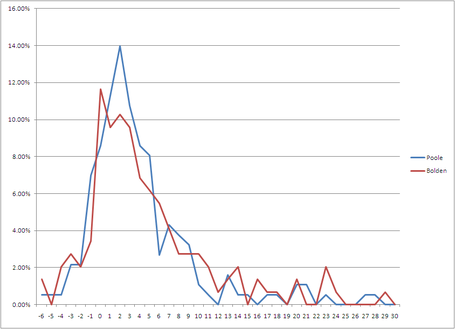 All figures in this post do not include rushes against I-AA teams.

Poole was marginally better than Bolden at avoiding bust plays (rushes for no gain or a loss), with Poole's bust percentage at 21.51% and Bolden's at 23.29%. You can see with the big spike that Poole turned more mediocre runs from losses to 1-3 yard gainers. Both of those bust numbers are high as each team had rebuilt offensive lines, with Tennessee's in worse shape having replaced all five starters. Things will be better this fall as Ole Miss brings back five starters and Tennessee four starters for this year according to Phil Steele.

Of the guys I have looked at, only smallish speed backs McCalebb and Rainey are above either Bolden or Poole. Bolden and Poole were every down backs though, with the former getting nearly three times as many carries as the next highest running back on his team and the latter getting almost five times as many carries as the next guy. Richardson was in their neighborhood, but he was not Alabama's primary back.

As mentioned, Ole Miss and Tennessee especially should have improved offensive lines in 2010. Poole and Bolden have shown that they're able to break off some big runs, and they won't have as large a bust rate this fall. Richardson, Lattimore, and Dyer will get plenty of carries, yards and accolades, but keep an eye on these two. They'll be doing some great work of their own in 2011.