What Arkansas is Missing in Knile Davis and Broderick Green

Share All sharing options for: What Arkansas is Missing in Knile Davis and Broderick Green

Injuries are the cruelest aspect of sports, as they cause personal grief to the afflicted and weaken otherwise strong teams. Arkansas is dealing with two big ones, with both Broderick Green (ACL) and Knile Davis (ankle) out for the season. The Razorbacks had been considered a national championship sleeper team in some corners before Davis went down last week. His absence has cooled down much of the talk about the Hogs' prospects this fall.

A couple weeks ago I began preparing rushing distributions for SEC teams' leading rushers in 2010. That effort got scrapped by all of the realignment craziness, but I did get the first four teams (alphabetically) done. That includes Arkansas' two leading rushers from 2010, Davis and Green.

Here is a chart of frequency of rushes for distances of -6 to 30 yards. You'll want to click it to make it bigger. 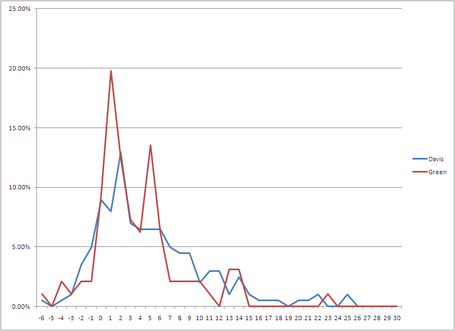 All figures in this post do not include rushes against I-AA teams.

Green is more of a power back, so a larger percentage of his carries came in short yardage and red zone-type situations. You see that in his big spikes of 1- and 2-yard rushes. He had another spike at five yards, though I don't know why specifically that happened. You can also see that he also had fewer rushes for no gain or a loss than Davis did, partly a testament to his power and partly due to some of the beefier lines he ran behind situationally.

Where Davis pulls ahead is on runs of seven yards or more. He consistently had more (except for a couple random spikes for Green), reflecting his speed and overall higher quality as a running back. If you're talking about backs in a "boom or bust" context, Davis had a lot more boom with a little more bust.

Here are how the 10 ball carriers I did examine fared in terms of booms (runs of 20 yards or more) and busts (runs for no gain or a loss). For the quarterbacks, sacks were not included as those aren't true rushing plays even if the NCAA includes them in rushing stats:

All three of the Auburn backs listed had boom percentages of over five percent, and Dyer and Newton along with the two Alabama backs had markedly lower bust percentages than most the rest. That likely has to do with the great offensive lines those teams had. Ingram and Demps had surprisingly low (I thought) boom percentages, but they were banged up periodically and Ingram's is close to his boom percentage as a freshman (3.76%). Burton's low bust percentage is fairly remarkable given his teammates' higher rates and the fact that the defense knew it was a pretty much always a run play when he lined up at quarterback.

Arkansas' offensive line was not as good as Alabama's or Auburn's, so we see the bust rates for the Razorback rushers are on the high range of things. Davis' value over Green also really shines through here as he had a lot more big runs with not too many bad runs. As I said usage plays into that to a degree, but Davis is the bigger loss to the team for sure.

I know you didn't need a bunch of charts and numbers to determine that much, but this at least shows you to what degree the difference is and how the backs compared to some others in the conference in 2010.