Share All sharing options for: Ryan Succop is Mr. Irrelevant 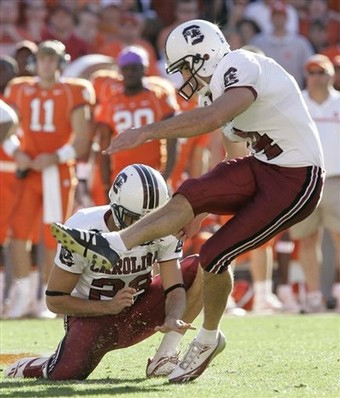 Mr. Irrelevant? Only by tradition.

South Carolina kicker Ryan Succop is this year's Mr. Irrelevant, the 256th of 256 picks in the NFL Draft. He goes to the Kansas City Chiefs, who get one of the better kickers in the SEC. Succop goes down in NFL history, though South Carolina fans will hardly remember Succop as irrelevant; his 35-yard FG in 2006 gave the Gamecocks a 31-28 win over Clemson, the first time in five years that South Carolina beat its in-state rival and still marks the only time since 2001.

The pick also means the SEC opens and closes the 2009 festivities.