What the Draft Says About the SEC

Share All sharing options for: What the Draft Says About the SEC

EDITOR'S NOTES: There is little other news in the SEC today, so Sprints will not run. For a list of the draft picks without all the chartage, Year 2 has you covered here.

I've always thought that attempting to rank colleges or confereces by the NFL Draft is worse than worthless. Whether a player is drafted and how quickly he is drafted is more a statement of his potential in the NFL -- or at least his perceived potential -- and less a measure of his value in college football. And as long as Al Davis is still valiantly making "crazy old man" picks like Michael Mitchell at 47, the whole thing has to be taken with a grain of salt.

(Coincidentally, someone needs to tell ESPN that Matthew Stafford, and not Mark Sanchez, was the No. 1 draft pick this weekend. Then again, they ranked a straight steal of home as the fourth-best play of the weekend, so that tells you something about their credibility on such things. At least they didn't do things like predict with absolute certainty something that did not come to pass.)

Nonetheless, it's pretty impressive for the SEC when you start to break down the numbers.

Again, broken down: More than half of the players listed on the NFL.com conference page were drafted. Almost 15 percent of the players drafted came from the NFL, including a quarter of those taken in the first round. The odd-numbered rounds, for some reason, seemed to be kinder than the even-numbered rounds.

Notice, again, that the SEC has both Mr. I-get-a-makeover-from-Maria-Sharapova, the first pick of the draft, and Mr. Irrelevant, the last one. Who is taking the nickname quite well, we should add.

But, again, the limits of drawing information about superiority from the draft. 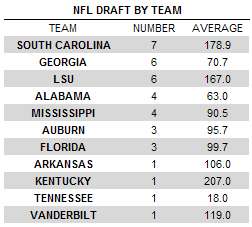 South Carolina, Georgia and LSU take the top three spots. All three disappointed last year and were done with their seasons by the time the BCS began. Not for nothing, but Georgia's recruits were, on average, selected far higher than LSU or South Carolina players.

Alabama, tied for fourth, and Florida, tied for fifth, went to the BCS -- the Gators won the championship -- while Ole Miss (also tied for fourth) went to the Cotton Bowl, far beyond where they were supposed to be. And Vanderbilt -- tied for last -- placed above South Carolina in the SEC standings and had its best season in a quarter century.

Not to (borrowing the political phrase du jour) relitigate the past, but this again raises the question of whether South Carolina should have done better in the last two years. Consider that South Carolina went 13-12 while the next three teams on the list went 21-5 (Georgia), 20-7 (LSU) and 19-8 (Alabama) and Ole Miss -- headed by the Orgeron one of those years -- managed a 12-13 record. Was it coaching? Did the players not apply themselves? Or was it something else? Sure, having seven players drafted gives Steve Spurrier a powerful recruiting tool -- but if these numbers are any indication, getting talent hasn't been the problem.

LSU, for its part, seems to have sustained no damage to its reputation as a talent mill after its disappointing 8-5 season last year. The flip side, of course, is that six NFL-caliber players are now gone from that team, and the Bengals have to figure out a way to win more games without them.

And how long has it been since Tennessee had only one player selected? Sure, some other guys will catch on as free agents, but again, perspective: As many South Carolina kickers were chosen as Tennessee starters.

Again, what does this tell us? In the end, probably very little. But it's fun to take a moment to consider the great players who must now get on with the next stage of their lives and careers.

For us, it is time to move on to the next season. At least, once your humble correspondent finishes the @%#$@! season in review posts.