What is the SEC's Penalty for Poor Non-Conference Scheduling? Does it Matter?

It only matters if someone will actually get the penalty.

Share All sharing options for: What is the SEC's Penalty for Poor Non-Conference Scheduling? Does it Matter?

Ever since the SEC's scheduling announcement came down on Sunday, it's been a topic of speculation as to what kind of penalty there will be for the non-conference requirement. That requirement is, if you need a refresher:

In addition, at least one opponent from the ACC, Big 12, Big Ten or Pac-12 must be scheduled by each SEC school on an annual basis beginning in 2016, with assistance from the conference office.

The fact of the matter is, this probably won't be a problem. Almost every school has fulfilled this requirement every season since 2006 when the 12-game schedule became permanent. The exceptions are Ole Miss (failed 3 times), Mississippi State (3), Texas A&M (2), Arkansas (1), and Tennessee (1).

For those counts, I included Big East teams that eventually got bids to a Power 5 conference and excluded those that did not. So when a team played West Virginia or Rutgers, that counts, but playing South Florida or Cincinnati does not. Tennessee's one "failure" was 2011 when it played a pretty good 10-3 Cincy team, so the Vols didn't exactly get off easy.

Going off of the same criteria for what counts as a power conference team, here is a chart of the SEC's Power 5 conference opponents by year (click to make it bigger): 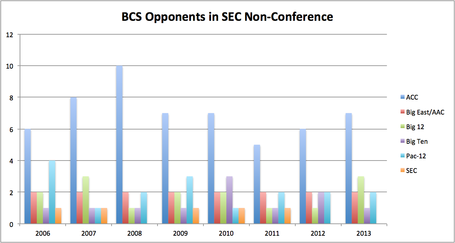 Yes, the SEC shows up on its own non-conference chart because Missouri and Ole Miss played in 2006-07 and Arkansas and Texas A&M played in 2009-11. You may file all complaints with the league office in Birmingham.

Unsurprisingly, the ACC comes out as the most common conference opponent. Not only are there three annual rivalry games with its members, but Georgia Tech, Virginia Tech, Duke, and Wake Forest play SEC teams with regularity. Plus, South Carolina likes to play its old ACC foes UNC and NC State with regularity. The fact that the ACC is also sticking with an eight-game conference schedule means that plentiful ACC matchups should continue into the future.

The Big Ten is switching to a nine-game schedule in 2016, but the availability of Pac-12 and Big 12 teams didn't fall off after those leagues went to nine-game slates. I don't anticipate there being many problems in lining up power conference opponents with a good faith effort.

The real remaining question is what happens if a power conference opponent pulls out of an agreement at the last minute. It doesn't happen often, but it is not unheard of either. If an SEC team has its, say, Big 12 opponent bail out of a contract in February or March, it might not be able to find a replacement. By then, most teams have their schedules set already, and the one to three Power 5 teams with an open slot left might not have a free week that corresponds with the SEC team's free weeks.

That scenario is why I think "with assistance from the conference office" is in the rule as quoted above. The league will be on top of all of this, and it will stay informed of developments as they happen. That assistance might range anywhere from simple forgiveness for having a fourth cupcake due to a last-minute cancellation to potentially even providing money to help buyout a cupcake to free up a week to schedule a Power 5 opponent. We'll have to see what happens the next time there is such a cancellation, but they don't happen all that often.

Everyone in the SEC has plenty of advance notice of this rule change, and most teams have been scheduling a Power 5 opponent every year anyway. Only the Mississippi schools have made anything resembling a habit of skipping power conference foes in the non-conference, so they have some adjusting to do. Everyone else has it down pat, basically.

Long story short, I don't expect we'll ever see an SEC school get a penalty for not fulfilling its non-conference scheduling requirement.

Next Up In College Football