What We Learned About Georgia's New Defense

Share All sharing options for: What We Learned About Georgia's New Defense

Georgia took first place in the SEC Power Poll after a largely impressive win over Clemson on Saturday. Todd Gurley was a big reason why the Bulldogs ended up there, and you'll not hear any argument from me against his brilliance.

A reinvigorated defense is the other big reason why UGA ended up there. Jeremy Pruitt's guys had something of a shaky start, but particularly in the time after Todd Gurley's kickoff return touchdown, they shut down the Tiger offense.

I went through the game and studied the times when Clemson had the ball to see if there are any lessons we can learn from the performance. After doing so, I'm not quite ready to put UGA in the playoff just yet, as it was more of a mixed bag than it seems on the surface. The potential for greatness is there, but it is still just potential for now.

If you are conservative and conventional, you might as well punt on first down.

Here is the drive chart from ESPN.com for Clemson in the second half:

It's really easy to focus on the rightmost three columns, which show nearly all three-and-outs, meager yardage output, and all punts. Go one further over and you see that the Tigers began each drive severely backed up.

For the most part, Chad Morris played things very conservatively when deep in his own territory. Cole Stoudt was able to connect on a couple of long passes to give the team some breathing room during first half touchdown drives, but after his interception late in the first half, the downfield passing game disappeared almost entirely. Once it became clear that the Tigers wouldn't be testing the secondary deep, everything in the short passing game failed.

UGA's front seven was terrific at stopping Clemson's conventional running game as well. Only on the Tigers' final first half drive did they get anything on straight ahead runs, and, not coincidentally, UGA had subbed in its backup defensive line for that drive. The drive went for 13 plays, the most of any for Clemson, and lasted 65 yards but ended on a missed field goal.

Some of the most effective running plays Clemson had were early runs by Stoudt. It seemed to be a side effect of Georgia simply not believing that he would ever run. He's a drop back passer and not much of a runner, as backup Deshaun Watson is the designated mobile quarterback. Watson had a nearly flawless drive in the first half as UGA struggled with having to account for his mobility, so having a guy who can move will be a big asset against this Bulldog defense.

You can pick on the pass defense...

Georgia's secondary already projected a bit thin for this season, and that was before Tray Matthews and Josh Harvey-Clemons left the team during the offseason. When Clemson actually attacked with its passing game instead of just throwing screens, it found some weaknesses.

Clemson had five completions of 20 yards or more. The first was a short pass that turned into a 38-yard gain because freshman DB Aaron Davis missed the tackle. The second was a 29-yard completion where Damian Swann lined up one-on-one with Mike Williams and Williams just beat him. The third was a 30-yard touchdown where LB Ramik Wilson was covering a wide receiver and he never looked back at the ball. The fourth was a 35-yard strike where Artavis Scott beat Davis, who also never looked back for the ball. The fifth was a short throw to Williams where he easily juked freshman CB Rico Johnson, who took a bad angle, and gained 21. The Tigers could have had at least two more if not for drops and a defensive pass interference penalty.

Davis is a walk-on who played corner in the spring and is now splitting time at safety. He did snag the game's only interception, but it came after Stoudt both stared down his receiver and double pumped. He was vulnerable most of the night.

Clemson could have burned Georgia more if it didn't hurt itself. Watson could have completed a nice gain of at least 10 yards after Demarre Kitt beat Davis one-on-one, but the pass sailed high as either the freshman Watson misfired or the freshman Kitt cut his route off too soon. Stoudt could have picked up a badly needed first down on a third down pass early in the fourth quarter down only three, but he short armed it and the receiver fell while catching it.

Stoudt looked bothered by the pass rush on that play, and it was for good reason. The first string defensive line gave Clemson's offensive line problems all game long. Beyond that, Georgia's blitz packages utterly flummoxed Clemson's protection. I mean, look at this. It appears as though Clemson is trying to open a hole for Amarlo Herrera. 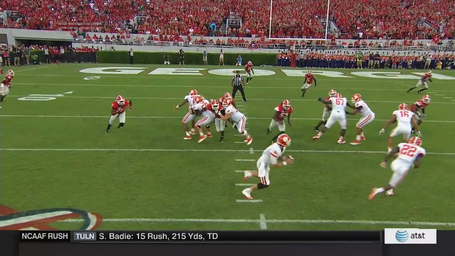 Georgia racked up five sacks on the night, but that doesn't fully cover the carnage. Georgia blitzed frequently on obvious passing downs, and it got players through unblocked on at least three occasions on my count. Clemson attempted to convert third downs with the pass 14 times, but it only converted three of those, none longer than five yards, and allowed two sacks.

When Clemson was running something resembling a full offense in the first half, it was able to hold off the rush at times and succeed with the pass. It is no coincidence that only one sack came in the first half, and all of them were within 26 yards of the Tigers' own end zone. With Clemson backed up terribly and playing scared with its play calling, UGA could tee off.

Stoudt is a senior, but he's pretty clearly a one-year stopgap until Watson is ready. "One-year" might even be optimistic, as I wouldn't be shocked to see Watson take over the job later this year based on what I saw. Stoudt will be adequate for most of Clemson's opponents, but he's not a difference maker.

Clemson did its best work when it was being aggressive. After Stoudt's interception, the offense became almost exclusively runs and passes no more than five yards past the line of scrimmage. Georgia ate that stuff right up. That is why I am not yet ready to bet big on the UGA defense, even after the dominating second half performance. True, a lesser defense would not have been able to do what Georgia's did, but it also got a lot of help from Clemson.

South Carolina makes for a good second test of the Bulldogs' defense. Carolina's offensive line is better than Clemson's is. Dylan Thompson is more mobile than Stoudt is and is more experienced and a better passer than Watson is. Mike Davis is a question as he's banged up, but Nick Jones and Pharoh Cooper will test the secondary from out wide. If Thompson has time to throw or can use his feet to buy time, guys will get open.

If Gurley gives Georgia a lead—and really, that's probably more "when" than "if"—we know what will happen. When the Gamecocks went down against Texas A&M, they threw the ball almost every play. It was a far cry from Clemson's shell shocked play calling. Pruitt could easily respond by blitzing the Gamecocks out of the stadium, but South Carolina will at least put some level of pressure on the defense's weakest links.

Georgia's defense showed us on Saturday that it has the potential to be one of the best in the conference. It also showed the potential to get torched badly when it can't get to the quarterback. Which is the "real" Georgia defense? Probably both, actually. I'm certain we'll see both the Jekyll and Hyde of the Bulldogs' defense at different times this year. It'll all come down to matchups. For instance Texas A&M, with its terrifying passing game and nearly NFL-caliber line, would be a nightmare for UGA. Fortunately for the Red and Black, the Aggies aren't on the schedule.

The fact that this is something of a down year for quarterbacking in the SEC means Georgia has a great chance to escape its defensive deficiencies in most weeks. UGA is clearly the frontrunner in the East for now, and it should be.