Florida was the 800-lb gorilla of the 2010 NFL Draft once again. A total of nine Gators heard their names called from the podium in Radio City Music Hall during the three-day event with no less than three on the first night alone.

Alabama, shut completely out of the draft just two years ago, came in a strong second in the SEC with seven players selected - the school's best performance since 1987. The SEC Player chosen earliest was Tennessee's Eric Berry who was selected by Kansas City with the No. 5 pick.

The SEC had a strong showing overall with a total of 49 players selected - significantly more than any other conference. The Big Ten had 34 players drafted, followed by the Big 12 with 32, the ACC with 31 and the Pac 10 with 29.

Seven SEC players were snagged in the first-round Thursday night, not quite enough to best the Big 12's nine. That makes the fourth year running the SEC has has five or more players taken in the top 20 selections, according to ESPN's Chris Low. 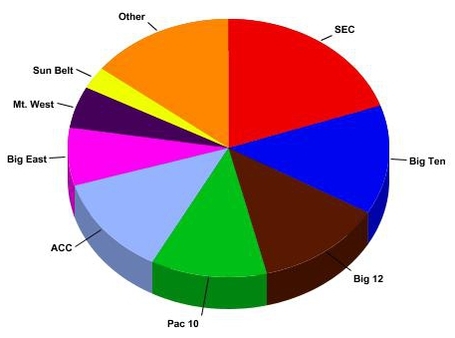