Share All sharing options for: Distribution of Head Coaching Salaries

The USA Today put together a listing of as many I-A head coaching salaries as possible, with the caveat that private schools don't have to release the information. I plan on putting this information to good use as so many great things can come from it.

First up for now, I've got salary distributions for BCS and non-BCS conference coaches. You and I both know that there's a discrepancy between the levels of salary there, but how big is it? 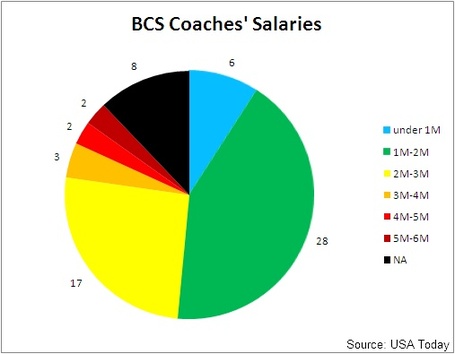 The bulk of coaches make between $1,000,000 and $3,000,000 per year. Only six coaches (that we know of) made less than a million, in declining order: Bill Stewart (WVU), Danny Hope (Purdue), Art Briles (Baylor), Tim Brewster (Minnesota), Bill Lynch (Indiana), and Paul Wulff (Washington State). It's interesting that two of those six got fired, as did the first guy above the million line, Dave Wannstedt.

By the same token, only seven (that we know of) made more than three million. They were, in declining order: Nick Saban, Mack Brown, Bob Stoops, Urban Meyer, Les Miles, Jim Tressel, and Kirk Ferentz. All of them except Ferentz have a national title since 2000 and have gotten their teams to multiple BCS bowls in the last four years. All but Tressel have also delivered at least a five-loss season in that same span, strangely enough. 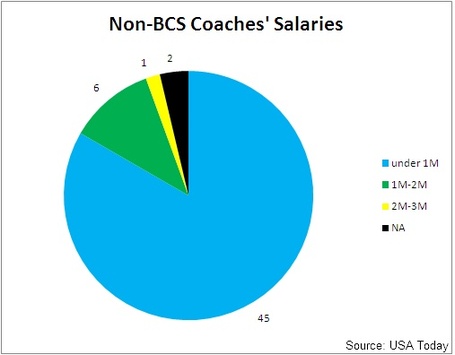 Not surprisingly, most don't even make a million a year. The only one to make over two million? SMU's June Jones. And you wondered why he left Hawai'i to go to Dallas. That is, of course, assuming that BYU and Tulane are shelling out less than $2,000,000 a year for Bronco Mendenhall and Bob Toledo.

The others over the million mark, in declining order: Gary Patterson (TCU), Chris Petersen (Boise State), George O'Leary (UCF), Kyle Wittingham (Utah), Greg McMackin (Hawai'i), and Kevin Sumlin (Houston). The lowest income for any coach was (the now-fired) Doug Martin at Kent State, who made just $190,000. Just like with the guys above, three of the seven lowest-paid coaches got the axe, as Todd Dodge (North Texas) and Rickey Bustle (UL-Lafayette) were also in that range.

I'll have more to come as time goes along, but that should be good for now.