Or, "cocknfire attempts to do math, probably ruins the whole thing"

With Year2 off enjoying his time in Liechtenstein or somewhere, it falls to your humble correspondent if there's a math post to be done. That said, remember that my day job is as a journalist, so any combination of myself and numbers is a bold step forward which will either illuminate the subject or leave me embarrassed and unwilling to even calculate a winning percentage in the future. Heregoes.

Among those who don't consider Ole Miss to be even a viable contender for the SEC West title, the fact that Houston Nutt constantly underachieves is an article of faith. Part of this is grounded in his penchant for coaching teams to bizarre results, like losing to Vanderbilt, defeating the eventual national champion Florida Gators (in Gainesville, no less) and then losing to South Carolina; or losing to Southern Cal by 36, then clinching the SEC West title, then losing three games in row to close out the season.

But has Nutt really underachieved? This is where the math comes in.

I've come around to agreeing with Year2 that the best way to decided "underachievement" or "overachievement" is to look at Pythagorean wins -- which are not really "Pythagorean," but I digress. For those who don't remember, Pythagorean wins essentially take into account how many points you scored over the course of the season and how many points your opponents scored over the course of a season and comes up with how many games you "should" have won.

Because blowouts of cupcake nonconference teams skew any system reliant on point totals, I used only games against BCS-league teams. Otherwise, slaughtering a Sun Belt or BCS team drives up the Pythagorean win total, making the team seem like it should have performed better than it actually should have. Ladies and gentlemen, Houston Nutt: 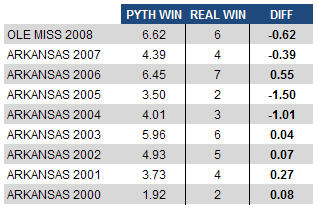 The red line with any team when it comes to Pythagorean wins is 1. So a team at +1 or better overachieved and a team at -1 or worse underachieved. So despite losing the Vanderbilt and South Carolina games, Ole Miss didn't underachieve that much last year.

In fact, the two seasons that leap out are the Razorbacks of 2005 and 2004 -- teams that, frankly, weren't very good. The 2004 team won back-to-back games just twice (vs. ULM and vs. Alabama; vs. Ole Miss and at Mississippi State) en route to a 5-6 record, while the 2005 squad won just four games overall, with losses including a 53-point annihilation against Southern Cal; one doubts Arkansas fans would have found solace in an extra win.

But in the four seasons in which Nutt was supposed to win around five or more BCS-league games, he only came close to "underachieving" once -- again, last year. (Granted, this is only his career since 2000, but that's as far back as the online NCAA archives go with statistics comprehensive enough to do this. Besides, he took over Arkansas before the 1998 season, so there are only two years missing.)

That's not all. Let's take a look at the other measure of underachievement -- how you did in comparison to expectations by the esteemed voters of the Associated Press? Some of you might think we've got Nutt here -- but we don't.

Even Nutt's reputation for pairing the surprising win with an equally puzzling loss isn't all-encompassing. After upsetting then-No. 2 Auburn in 2006, Arkansas would not lose another game until coming up five points short against then-No. 9 LSU seven weeks later. The only other losses that season were to Southern Cal, eventual national champion Florida and No. 12 Wisconsin in the Capital One Bowl. There have been some clunkers -- a 42-29 loss to Kentucky in 2007 is one recent example -- but every coach has a few of those buried in his past.

No, if Houston Nutt surprises, it's generally to the upside. And, given his team's performance in the course of a season, he usually ends up right about where he should.

Over the course of a full season, he meets expectations -- most of the time. With the Rebels believed by many to be among the Top 5 teams in the nation, that should be a comfort for Ole Miss fans this year. In the pressure cooker of the SEC, though, it's certainly not a guarantee.

Not for Nutt, and not for any other coach.