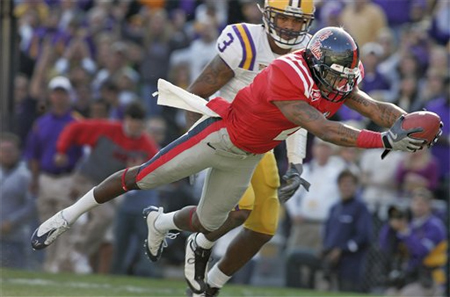 Hoddy Toddy, gosh almighty, what a year for the Rebels.

The early season was a bit disappointing, with a last-second loss at Wake Forest and a loss at home to Vanderbilt. No one thought that a week later they'd upset Florida (in the Swamp, no less), nor did anyone suspect they'd build on that by dropping their next two to South Carolina and Alabama (okay, maybe the Bama loss was expected).

The fall in Tuscaloosa would be the final for Ole Miss though, as the Rebels ran off six straight wins with an especially impressive final four: 59-0 over UL-M, 31-13 over LSU, 45-0 over hated Miss State in the Egg Bowl, and 47-34 over then-No.7 Texas Tech in the Cotton Bowl. It was enough to have Kirk Herbstreit pick Ole Miss as his preseason No. 5 team in his post-national title game rankings.

Ole Miss as this offseason's trendy team has raised a few eyebrows and caused some concern among the faithful. The Rebels haven't been a consistent national title contender in nearly 50 years, and yet here they are, expected by many to be right in the hunt. Houston Nutt did a remarkable job at turning the corner in the second half of 2008 which, when combined with the Florida win early in the season, makes as compelling a case for the legitimacy of those expectations.

Many things had to come together for last year's success to happen, from the transfer of Jevan Snead from Texas the year before to the concurrent down years of LSU, Auburn, and Arkansas. LSU and Arkansas will be better and Auburn might be, but Snead will still be around. First round NFL draft picks Michael Oher and Peria Jerry will not though, which has caused some concern for doubters. Greg Hardy's presence on defense should stabilize the line some, provided he finally puts together a full season of full effort.

Despite not having David Lee around on his staff, Nutt is still one of the Wildcat offensive series' biggest adherents and users. Dexter McCluster is about as dangerous as anyone from it, so expect to see him running it as much as ever. McCluster is also the headliner of a very nice set of skill position players around Snead, which also includes receiver Shay Hodge and running backs Brandon Bolden and Cordera Eason. Enrique Davis certainly has potential to be a playmaker if his light turns on too.

With a pillowy soft non-conference schedule (Two I-AA teams? And you thought a signing class of 37 was shameless) and neither Florida nor Georgia on the conference slate, the year certainly does look promising. Now, I know that the schedule making process was hung up by ESPN and there were talks with TCU before the Frogs cut them off, but really guys, at least find a Sun Belt team or one of the directional Michigan schools.

Anyway, things are looking up for the Team Speed Kills Team of the Year for 2008. I can't guarantee that the Rebels will win another national title, much less the SEC West even. However, Ole Miss one way or another figures to be one of the most compelling stories of the 2009 season. With the exception of the Eli Manning era, when's the last time anyone was saying that? Perhaps that fact alone might make the Ed Orgeron years worth it.