PREDICTION: THE TIDE WILL PLAY FOR EACH OTHER

When a coach launches into a press conference philippic, especially when such was unprompted or unnecessary, my initial impulse is to dismiss him or her entirely. It's hard to take someone seriously when they're in the midst of a tirade. Of course, the increased volume or vitriol or both, is usually directed at a member of the media. I hardly ever feel sorry for the media member(s) being scolded. The vast majority of traditional journalists are stodgy and fatuous, they annoy me. But still, it's the coach who often winds up looking like the ass. That said, I found myself applauding Nick Saban on Monday when he went on one of his signature mini-rants: 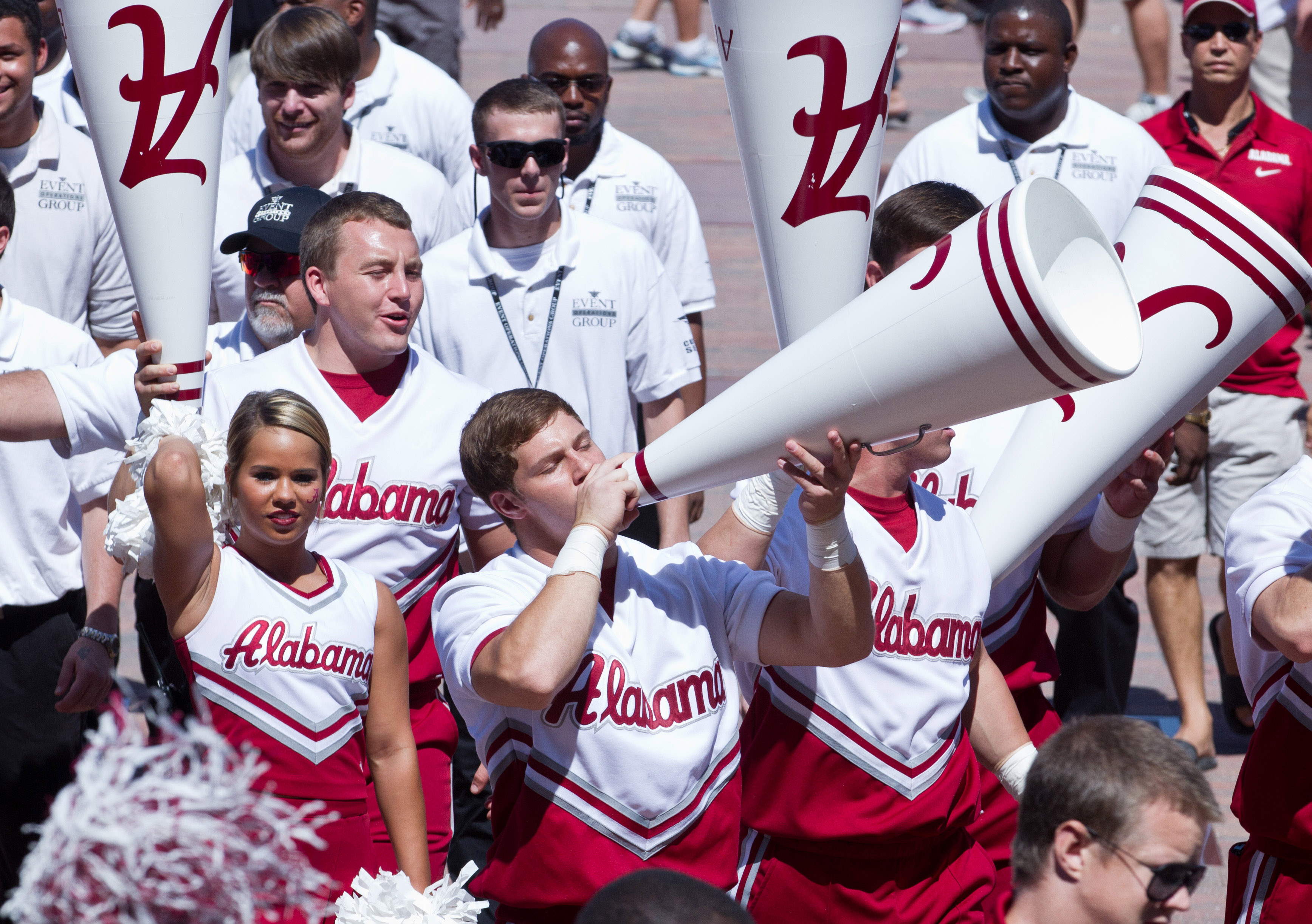 "It really doesn't matter what you think. It doesn't really matter what you say. And I'm hoping nobody on our team is playing for you," Saban said to a particular media member, although it was directed really at everyone in attendance and every media member, everywhere. "And it's not going to be for you. The fans, yes. Because if it was up to you, we're six-foot under already. We're dead and buried and gone, gone."

Saban was queried about managing his team's focus while that same team is being lauded this week. His response really didn't require all that. But it was so great to see him dress down the dolts who wrote Alabama off after one loss. It was one loss, and to a good team. And worse, the widespread dubiety was being expressed by the same persons who helped craft Alabama's repute as both dynasty and despot. The idea of ‘Bama not being a threat this year or any year in the immediate future was asinine, and of course, it lasted only two weeks: last weekend Alabama pantsed Georgia, and in turn the Tide were allowed to reassume their position atop the conference throne. When the reporter asked Saban how his team was dealing with the sudden extolment, it was the praise coming from journalists like himself that he was referring to.

However unlike, say, Florida, the Tide in the past few years have grown accustomed to collecting hand imprints on their shirt backs. Their focus shouldn't be an issue this weekend. And that's good for Alabama, because Arkansas may give the Tide all it can handle on Saturday. May.

1Alabama's run defense is rather stout. With five seconds left in the third quarter and his team emerging victorious a laughable thought, Georgia running back Nick Chubb broke off an 83-yard touchdown run last week. It wasn't wholly surprising—Chubb is probably the second best running back in the country. However, that singly play constituted the bulk of his production against Alabama, as he ran for 63 yards total on his other 19 carries. Alabama's run defense is very good. It's the ninth-best in America, and it has given up just three rushing TDs and a paltry 420 total yards all season. Now, Alex Collins is Arkansas' running back and the biggest reason for his team's win last week at Tennessee. He's run for 55 more yards in the last three games than Alabama's defense has given up all season. But something has to give on Saturday, and it's unlikely to be the hoard of large and agile men wearing crimson. 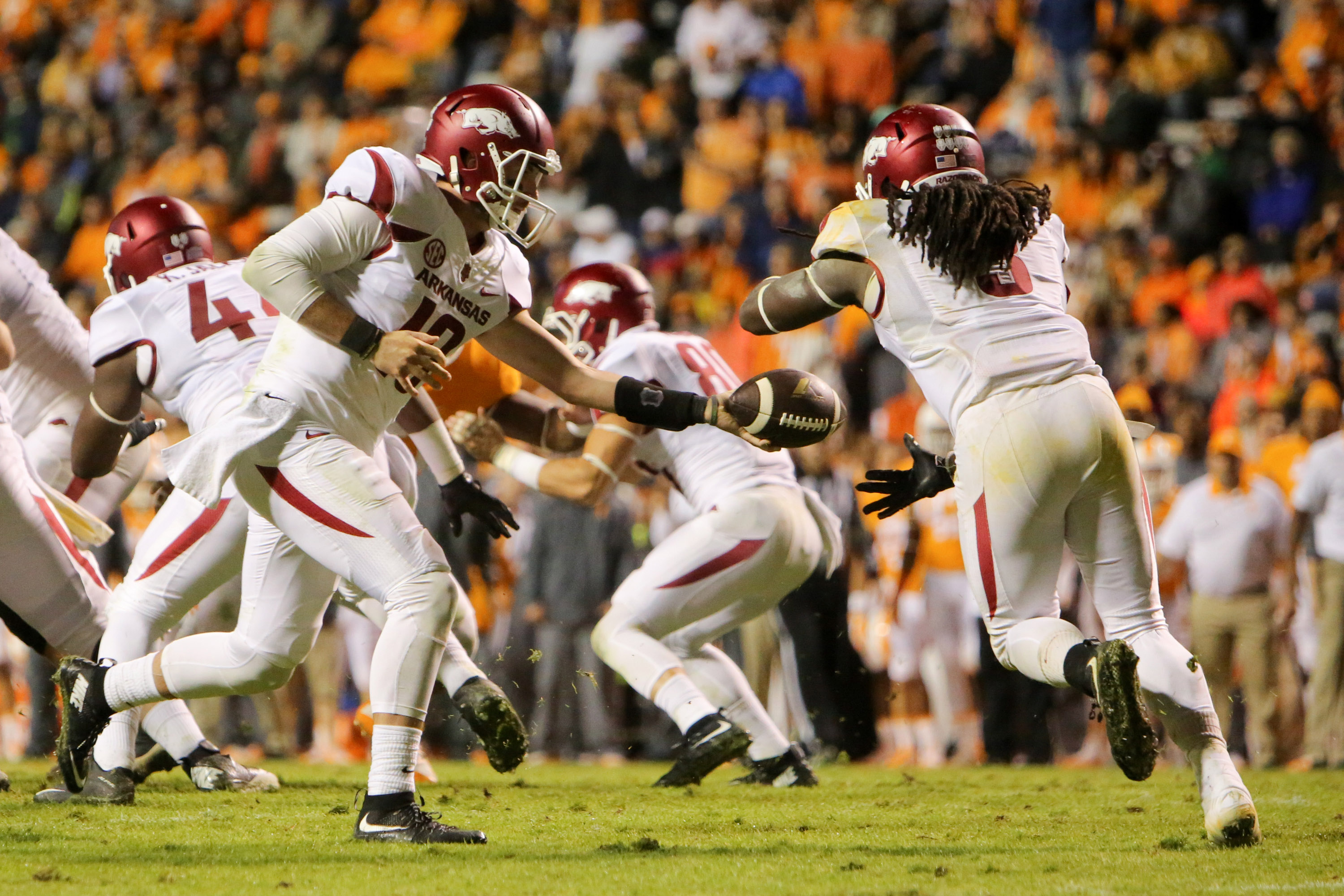 2So uh, Arkansas may have to do it through the air? It likely might, but hey, it could work out well for the Hogs! Alabama's back end has been tested only once this season, and, as many know, it didn't exactly go amazingly. Arkansas quarterback Brandon Allen spins it alright: he threw for 219 yards last week. Receiver Drew Morgan caught five balls for 110 yards, and tight end Hunter Henry had a 51-yard reception—I mean, there are options in the receiving game. The ‘Bama DBs played well last weekend (three picks), but neither of Georgia's quarterbacks are any good at football, so the first post-Ole Miss test may be very well be against the Razorbacks. Arkansas is often like, run, run, run, but it may want to re-implement that Toledo game plan (53 pass attempts from Allen) on Saturday.

3Jake Coker on the come-up perhaps? For whatever dumb reason, the game manager sobriquet continues to get a bad rap. Which is stupid, because game managers more often than not win games, which is the whole point to all of this. Jake Coker is not an official game manager yet, but a few more outings like last week, and the kid could be on his way! Coker managed the hell out of the Georgia game last week, completing 11-of-16 passes for 190 yards. In turn, his team managed to beat Georgia soundly. Last week's game was a nice start, especially against UGA's solid front line. Arky isn't quite as intimidating defensively, but managing things against the Hogs will be another solid step for Coker in his quest to be Alabama's next championship game manager.

4Arky vs. Henry. So hey, Arkansas hasn't been too bad against the run itself this season—it's yet to allow a 100-yard rusher in five games. Of course, the majority of its competition thus far has preferred to achieve wins through the air, but still, this is a nice statistic. Derrick Henry, he who runs the ball for Alabama, has gone for 120-plus on three occasions this season. He's actually pretty good, if you've never seen him play. We'll find out Saturday if Arkansas is actually adept at stopping the run, or if those stats are the upshot of a slew of aerial-minded opponents. That outcome could very will determine the final outcome.

5Arkansas ... confident? Heading into this season, Arkansas was widely thought to be an improved team from last, during which, it lost to the Tide by a mere point. The Hogs envisioned a better start to this year than what's unfolded, but they are at least coming off an impressive road win in which they were the underdogs. Couple that with memories from last year's über-close game, and hey, the Razorbacks may have a bit of belief going into Saturday. An added bonus for the Hogs: what the hell do they have to lose at this point? They already lost to Toledo, and it doesn't get much worse than that. Figure to see a loose Hogs team for a quarter or two, or hell, maybe even four.

Brandon Allen, Arkansas QB: As noted above, Allen's arm may well be the key in this game. You're probably wondering what he did against the Tide last year, and you're in luck, because I have his stats: 21/40 passing for 246 yards. I mean, hey, that's not bad at all. It'll take that kind of effort to pull of the minor miracle of victory on Saturday.

Jarran Reed, Alabama DL: Jarran Reed is 6-feet-4 inches and 313 pounds of real, live man. Arky's O-Line may well be the biggest on the damn planet, but it's going to take two of those fatties—I mean, big uglies—to contain Reed. He's second on the team in tackles (28), has two of such for a loss, and a sack this season. Judging by the way he handled Nick Chubb at times last week, it's unlikely Alex Collins worries Reed.

Calvin Ridley, Alabama WR: Ridley was a five-star recruit in high school, and he sure as hell played like a five-star last week (5 catches for 120 yards and a touchdown). In case the Arkansas run defense is for real, Ridley should plan on contributing Saturday. He's just a freshman yes, but he's fast, and elusive, and all that good stuff that serves receivers of any experience-level well. You should watch Ridley because he could wind up being kind of important to the game's outcome, but you should also watch Ridley because Ridley is kind of fun to watch.

I mean, yeah, I think Arkansas plays a good game on Saturday. I think the Hogs will put pressure on the ‘Bama back end, and in turn get a few scores. However, the Crimson Tide are really starting to figure some things out, especially offensively. I think Arky's defense will eventually collapse under the mountain that is Derrick Henry, and I think also, that Coker will manage the game in much similar fashion to last week. The spread is apparently two-touchdowns-plus, but I don't think it gets quite that out of hand: Alabama 28, Arkansas 17