WHY IS NO ONE TALKING ABOUT THIS GAME, IT'S GOING TO BE THE BEST SEC GAME OF THE WEEKEND

Share All sharing options for: Florida Gators vs. Missouri Tigers: Start time, TV coverage, How to Watch Online, and More

The eminently spoiled Florida fan base also tends to be exceedingly pessimistic or fantastically optimistic—it depends on the state of the program, of course. There are other fan bases for which this description rings true also, but Florida folk really take it there. To wit, the texts and social media posts I observed following the Gators' 38-10 win over Ole Miss, a messaging stream from my former UF classmates that were now, suddenly born again Florida fans: (Un-sarcastically) Hey, so the Hyatt for the SEC Championship game? and, We're definitely 2013 Auburn and, I thought 9-3 before the season, but now, I think we go 15-0! 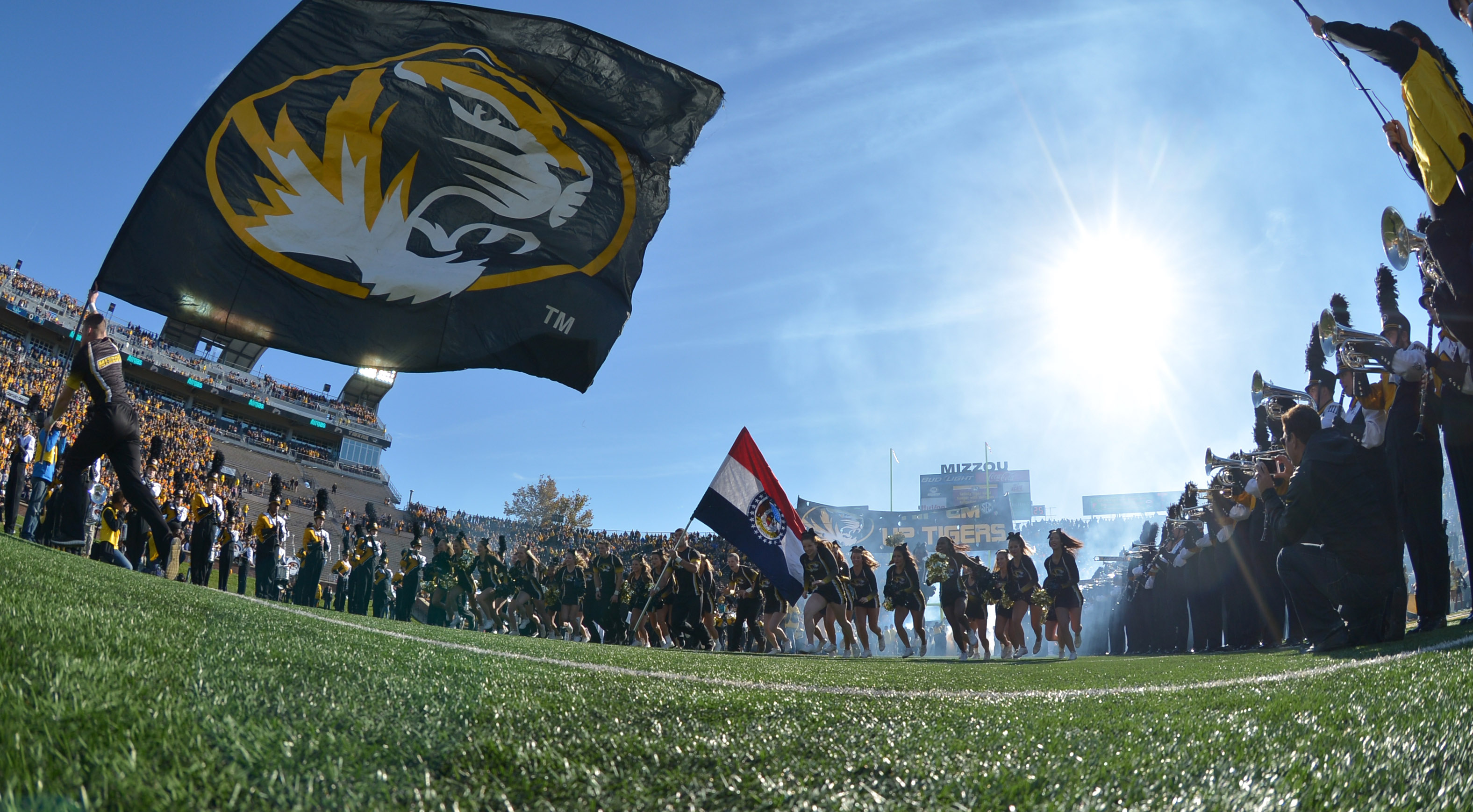 Admittedly, it's difficult to fault Gators loyalists for getting caught up in the immediate afterglow of a win as stirring (and, quite frankly, unexpected) as last weekend's, especially considering that 1) they were not the only ones to do so, as several within the college football cognoscenti listed the Gators as a playoff team in their changes-by-the-week mocks, and 2) it's a been a few years since UF fans, recently plighted by heartbreak, confusion, ennui, apathy and dispiritedness—or, in short, Big Dumb Will Muschamp Football—have been able to celebrate a win of this magnitude, and allow themselves to hope. So, I get it. However.

Of the remaining teams on the Florida schedule, the worst—literally, the worst—opponent it could've drawn this week was Missouri. Had it been say, LSU, or Georgia, or FSU— veritable rivals whose teams have enough cachet to command the Gators' undivided attention—even in the midst of a week of back-patting and glad-handing and Twitter-mentioning and playoff-mocking and all that jazz, the Gators' focus would be more likely to remain intact. Further, a loss wouldn't be quite so devastating to the team's confidence or deflating to the fans' hopes—each of the listed have been, or are, top ten teams this season—it'd be a letdown sure, but the optimism would remain. Had it been say, South Carolina or Vandy, or FAU, well, UF seemingly has the talent to get by on that grouping regardless of any circumstances leading up to the game.

But, Missouri. Missouri lies just enough under-the-radar that the post-Ole Miss revelry possibly, perhaps, lingered into Monday or Tuesday for UF's players; Missouri's 2015 exploits have been muted enough for UF fans to maybe overlook completely this team of Tigers in looking ahead to next week's Tigers. Missouri lost to Kentucky. Missouri suspended its starting quarterback. Missouri struggled mightily with UConn, which is worse than losing to Kentucky. Missouri is ... the perfect foil. Missouri's at home. Missouri has a new quarterback who's probably better than the old one. Missouri's beaten Florida twice in a row. Missouri's only loss is to Kentucky, meaning that, Missouri's but a single win over Florida away from being back in this thing. Hey, don't you know it, there's a lot on the line Saturday!

1Missouri's quarterback situation. Drew Lock, who matriculated at Mizzou just months ago, started against South Carolina last week. His predecessor, junior Maty Mauk, was suspended for something he likely should've known better than to do. The initial thought was that Mauk would sit out just the one game, and Lock managed to perform un-shabbily against South Carolina, a significant upgrade from Mauk, who's play this year had been frightfully shabby. Later, Mauk's suspension was upgraded to "indefinitely."

Lock looked OK against South Carolina if only because he was playing against South Carolina. Even Mauk might've passed for 136 yards on the Gamecocks (though it might've taken him 50 pass attempts to do so, compared to the 28 it took Lock, who completed 21 of those). The Carolina front sacked Lock just twice, and the Carolina back end is non-existent, really. This weekend will serve as Lock's introduction to a true collegiate defense. He won't need to turn in a heroic effort to win, but even just one or two mistakes could prove fatal. If there's one area where Mauk may be missed, it's in the running game: Mauk isn't the worst on his feet, and the Gators defense had trouble with the last scrambler it faced in Tennessee's Josh Dobbs. But ideally, Mizzou would have a game this weekend like it had last year against the Gators: let the defense and special teams score so much that your quarterback quite literally has to do nothing. 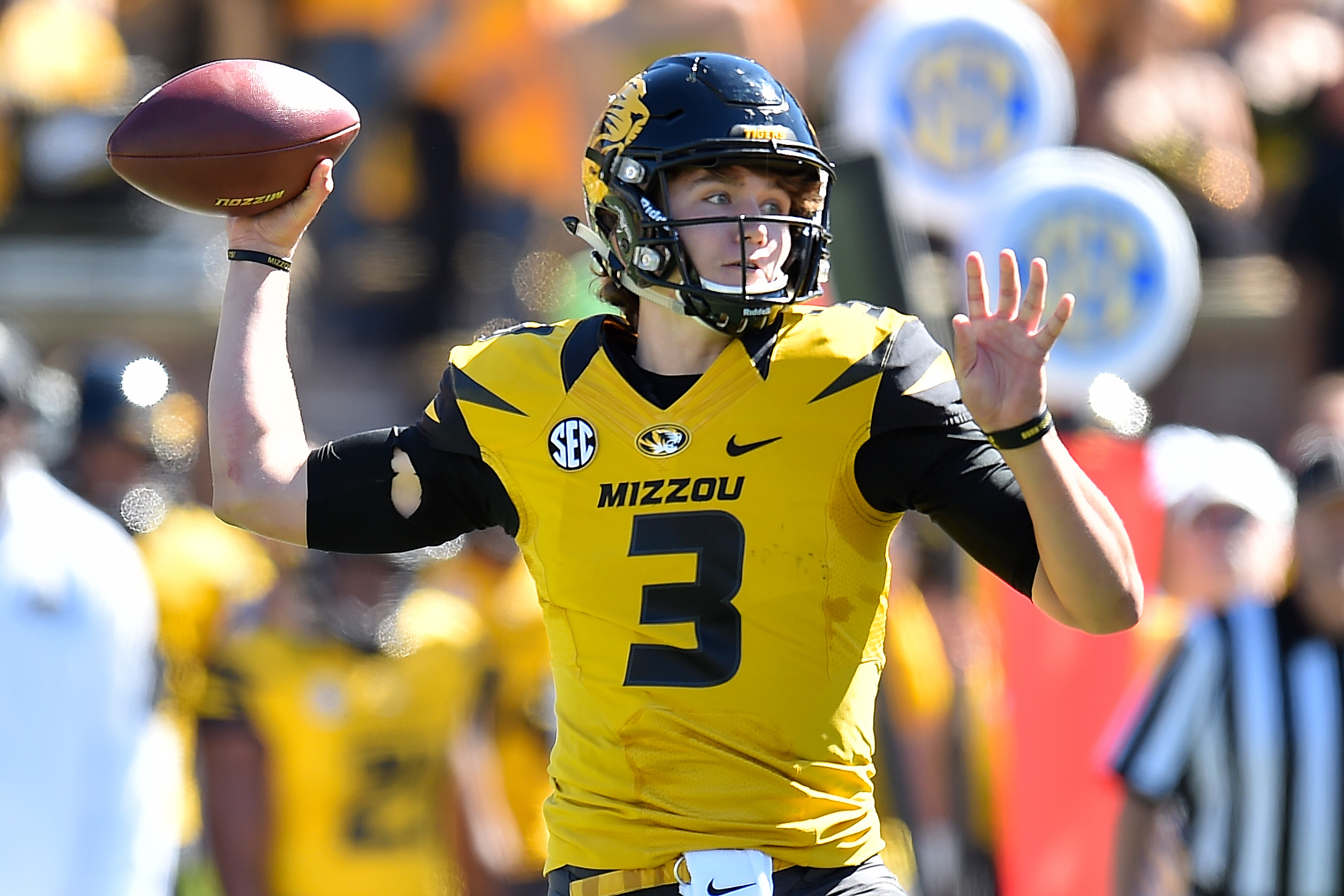 2Speaking of last year, this year probably won't be like last year. Out of 42 Missouri points in last year's game, the Tigers' offense contributed just 13, and seven of those points came really because Mizzou got the ball on Florida's 19 to start a drive (thanks to a defensive fumble recovery). Florida was god awful on offense last year, and though it's relatively verdant this year, it's not the same hapless bunch playing under the same hapless coach. So, one would be inclined to think five giveaways aren't in the cards for this weekend. Special teams gaffes are a bit more unpredictable, and Missouri scored twice on special teams last year. Specifically, Marcus Murphy scored twice on special teams last year, but he's gone now. So if the Tigers want to alleviate pressure off their meh offense and true frosh QB, their defense appears to be the best bet. That defense has continued its strong play from last year into this season.

3It's simple, whoever plays defense the best will win. Look, Florida's offense is improved this season I'll give you that. But is the Gators offense, like, good? The jury's out. Its last five quarters have been wonderful, but that's only five quarters, and the eight quarters before that were average. Below average, actually. Missouri's defense is as under-the-radar as a defense ranked eighth nationally in total defense could possibly be. The Tigers forced three interceptions last week, and though Florida quarterback Will Grier has been careful with the rock lately, as a redshirt freshman, he's not immune to making sudden dumbass mistakes—especially on the road. Mizzou had four sacks last week, two of which were by wonderful footballer Walter Brady, who had himself a game last week (he also had one of those aforesaid picks).

Missouri's offense, as noted above, is a work in progress. Florida's defense got a world of praise following last weekend, and rightfully so: the Gators forced four turnovers and were in Ole Miss QB Chad Kelly's face all damn night. The back end is Florida's most celebrated group, though curiously, it gives up an average of over 200 yards per game in the air. However, with five picks through five games, it remains a bunch you'd want to test cautiously, especially with a kid—a literal baby-faced boy—making just his second start ever for your team.

Both of these defenses are strong, and especially up front, and whoever can force the other team's young man of a quarterback into making some silly mistake is probably going to win.

4But Will Grier has been getting pretty good, though. Whether Will Grier can sustain his play from the last five quarters into this weekend and beyond is currently a mystery, but he's at least shown what he's capable of. And what he's capable of is, I must say, pretty impressive. Grier threw four touchdown passes in the first half of last week's game, a feat not done in a nearly decade by a UF QB. Attributable to Grier's success is the play of his offensive line, of which, quite honestly has no right to be playing as well as it has this year. Grier's jersey was kept relatively clean last week (sacked only twice), and the opposing line was manned by arguably the best defensive lineman in the nation. If Florida's hogs can continue their output, fending off Brady and DE Charles Harris, the chances of Grier exploiting the Mizzou back end—statistically, the best in conference—improves a good bit.

5Running games. Neither of our competitors this weekend have a calling card offensively, meaning that they'll both strive for offensive balance. They'll want to run and pass with equal adeptness if possible. But the running games will be especially curious to follow. Florida has five running backs on scholarship, but two are former walk-ons and two are true freshmen, so naturally, only one is used regularly: Kelvin Taylor, a recruited junior. He's OK. He's had a few timely runs and catches, and he's scored five touchdowns this season, but nothing to really write home about. As Taylor's youthful band of blockers grows more comfortable, however, Taylor's output could dramatically increase. It could possibly happen this weekend, even.

As for Mizzou's run game, it too has been just OK. It's best rusher, Russell Hansbrough, got hurt in both the first and second games, missed the third game, and came back and did nothing in the fourth game. But last week he had a resurgence of sorts, combining with Ish Witter to run for 141 yards between them on 28 carries. This is the sort of output Mizzou could use on Saturday. It's an old cliché: a quarterback's best friend is a strong run game—and such is especially pertain-able to a young, barely legal quarterback.

Jonathan Bullard, Florida DL: Watch Bullard on Saturday, if you can find him. Where he'll be lined up from snap to snap is anyone's guess, including his own: "It's week to week, Bullard said. "I never know where I'm going to end up ..." Bullard has 26 tackles this season, 9.5 of those being for a loss. He has 4.5 sacks, and 3 hurries, and now that I think of it, if you're looking for him, he'll probably be in the backfield somewhere. 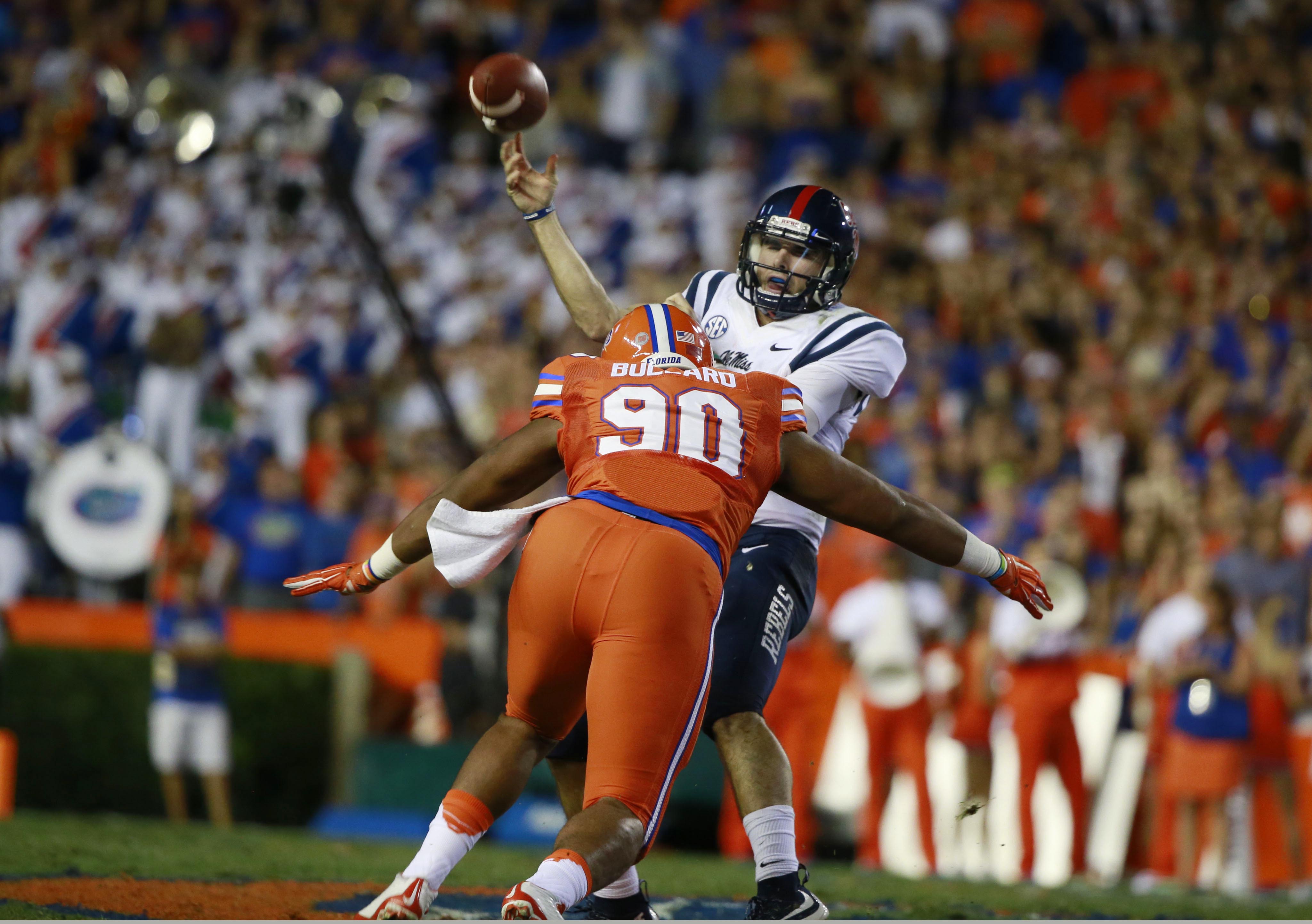 Ish Witter, Mizzou RB: The aforementioned Witter ran for nearly 100 yards last week. He's also from Florida, and I love a convenient narrative, which this most certainly is (Witter's playing against his home-state school! He's going to be sooo motivated, grrr!). I highlighted Hansbrough earlier because he's the guy who most knew coming into this season, but Witter's the one who shined last week; it may've served as his coming out party. By watching especially for Witter, you're in turn getting in on a possible breakout player before most. This is invaluable. And also, if he does well, so too likely will Missouri's offense as a whole.

Antonio Morrison, Florida LB: I feel obligated to include Morrison because he's the reigning SEC Defensive Player of the Week. And really, I could do worse because Morrison is rather good. He had 16 tackles last week against Ole Miss, 3.5 of which were for a loss, and for good measure he threw in half a sack. Missouri will probably be intent on establishing Ish Witter—and the run game as a whole, of course—early. Conversely, Morrison will be leading the Gators' run-stopping charge, of which will be pivotal. Will they be successful? I don't know. But if it is or isn't, Morrison will largely help determine the outcome.

Maty Mauk has made a mockery of the quarterback position this season. He's done nothing well, and quite frankly, has made every game he's played in virtually unwatchable. But if Maty Mauk were playing in this game, I'd predict Missouri to win. Mauk, for his beaucoup flaws, is at least experienced. Mauk is a skilled scrambler, a wildcard who could unwittingly find himself 15, 20, 25 yards downfield on a third-and-long.

Drew Lock is a newbie going against one of the best defenses in the nation. I think Missouri holds up its end of the bargain defensively and brings the UF offense back down to Earth. But I think the UF defense assumes the role of 2014 Mizzou against Florida, and creates an abundance of turnovers that result in scores or immensely short fields. Defensive struggles bore sometimes, this one'll be fun to watch. Florida 23, Missouri 15