Missouri always belonged in the SEC East, but now the media might be ready to admit it

Most of the ink over the last couple of years about how disrespected the Big 12 teams that moved to the SEC should have felt at SEC Media Days in 2012 has gone to Texas A&M. That's understandable in one respect; Texas A&M had the big win against Alabama and the better season in 2012, while Mizzou drowned in a sinkhole of injuries that resulted in the team getting bludgeoned by the league's heavies.

But I've always found the questions that Missouri faced in 2012 more bizarre. Over the previous four years, after all, Texas A&M had gone 25-25 overall and 15-18 in the Big 12 -- so even if the Big 12 was as good as the SEC, or even a touch better, the odds that the Aggies were going to have a great season in 2012 was a stretch. And, had it not been for the emergence of Johnny Manziel, A&M arguably would have gone to a mid-tier bowl.

Missouri, meanwhile, had gone 36-17 overall and 20-13 over the previous four years. The Tigers had won the Big 12 North once and tied for first in the division another time. Even if the Big 12 were a touch worse than the SEC, it didn't look like Mizzou was going to get killed -- and if the Big 12 was just as good, the other other Tigers could be contenders.

Alas, the injuries and such did happen and Missouri missed a bowl in 2012 -- then roared back to win the SEC East last year and play a competitive SEC Championship Game against Auburn. That might have been slightly better than a reasonable observer could have expected, but it was more in line with what seemed like a reasonable projection for the Tigers, at least in the short term.

So I asked Pinkel during his press conference Wednesday about whether last year was a vindication of sorts for Mizzou. He all but brushed the question off.

Someone apologized to me a little while ago the way they voted after this thing. I said, I don't know how you voted for us, I don't really care.

We'll see exactly how much as has changed since last year when the media's preseason rankings are released later this week. The smart money would put the other other Tigers in third or fourth in the SEC East, which seems reasonable given the losses the team has suffered on offense and along the defensive line. (And it might actually be better than being in first, given that the team that "wins" the preseason poll has won the conference twice since 1995.)

One encouraging sign: My question was close to the only one focusing on the move from the Big 12 to the rugged SEC. The other other Tigers now seem to be accepted as a "real" SEC team, whatever that means. 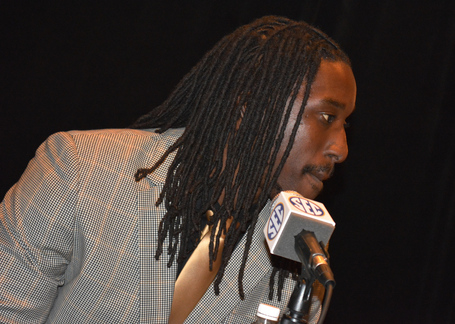 But there are still plenty of opportunities for Missouri to carry around a chip on their shoulder. Markus Golden recalled with a trace of bitterness watching South Carolina celebrate its come-from-behind victory at Missouri last year -- a game that almost derailed the Tigers division title hopes. "I'll never forget that," he said, before noting that Missouri comes to the SEC's first Columbia in 2014.

Missouri has earned its respect. Now, like the other SEC teams it always belonged with, it has an opportunity to think about more mundane things. Like payback.