SEC Football Week 2 Recap: Where the Teams Are Ranked and What They've Been Up To

Share All sharing options for: SEC Football Week 2 Recap: Where the Teams Are Ranked and What They've Been Up To

[Ed note: This will generally be two separate posts, but I'm running out of time this week. Since the SitRep is folded in, I won't belabor the power points ballot with comments.]

ALABAMA CRIMSON TIDE (2-0, 0-0): Yeah, the quarterback battle is pretty much over. Limited evidence, bad defensive opponents, caveat emptor -- but Blake Sims is 36-of-47 for 478 yards, two touchdowns and interception. His passing efficiency is 171.81, which is excellent, and he does add that famed extra dimension, running for 56 yards and another touchdown on nine carries. Is he going to put up those kinds of numbers against SEC opponents? Probably not. But Jacob Coker has given us little reason to think he would do any better, and Sims probably doesn't have to be quite that good for Alabama to win conference games.

ARKANSAS RAZORBACKS (1-1, 0-1): There's not much more you can say about a 73-7 beatdown of a dramatically inferior team after you've thrown out all the weird and wacky statistics, but here's one more: Nicholls State had a nine-minute edge in time of possession in this game. (Another reminder that TOP is not a be-all, end-all statistic.) It's a little bit hard to judge based on the fact that the Razorbacks had a 21-0 lead by the time they had run five plays, but this is likely the kind of offense that Bret Bielema is going to prefer: 14 pass attempts, 40 runs. Yes, Arkansas had 19 more points than they had offensive snaps.

AUBURN TIGERS (2-0, 1-0): Cameron Artis-Payne tacked on 16 more carries for 112 yards and three touchdowns, taking his season numbers to 42 rushes, 289 yards and four scores. Three other Tigers ran for at least 50 yards in the game, including Nick Marshall, Corey Grant and Roc Thomas. Perhaps the biggest question the offense faced coming into the season was how much it would miss Tre Mason, but so far the Tigers appear to have the players to pick up some of the slack.

FLORIDA GATORS (1-0, 0-0): A few stats: 21 first downs, 285 yards passing, 194 yards rushing, 11-of-17 on third down and 28 points. No, those aren't Florida's numbers against Eastern Michigan, they are the Morgan State numbers against Eastern Michigan last week in Ypsilanti. (And these were not garbage-time numbers; Eastern Michigan won by a 31-28 margin.) The Morgan State Bears went 5-5 against fellow FCS teams last year. There's been understandable giddiness among Florida fans about the cathartic feelings of putting together the kind of should-be lopsided wins that often didn't happen in the last few years, but let's throttle back on the "WOW FLORIDA OFFENSE" talk a little bit. Let's see how well they play as they move into the SEC schedule.

KENTUCKY WILDCATS (2-0, 0-0): Kentucky took control of this game early, with a 14-point first quarter, and never looked back. But there were still some missed opportunities -- a couple of missed field goals, etc. -- that could cause problems against better competition in the future. The defense showed up, holding Ohio to 0-for-8 on third-down attempts in the first, third and fourth quarters, and 223 yards overall. They forced Ohio into six three-and-outs. But with Florida next on the schedule, things are about to get substantially harder.

LSU TIGERS (2-0, 0-0): Leonard Fournette got his first touchdown Saturday. You might have heard something about this. But Fournette had an all-around good game, carrying the ball 13 times for 92 carries and never getting tackled for a loss. The passing game was a bit uneven against Sam Houston State, but Anthony Jennings threw three touchdowns and Brandon Harris threw another, and with the Tigers rolling up 334 rushing yards on 58 attempts, you don't need a great passing attack. And LSU gets a game against the Louisiana-Monroe Warhawks next week to work out a few more kinks before hitting the SEC schedule. 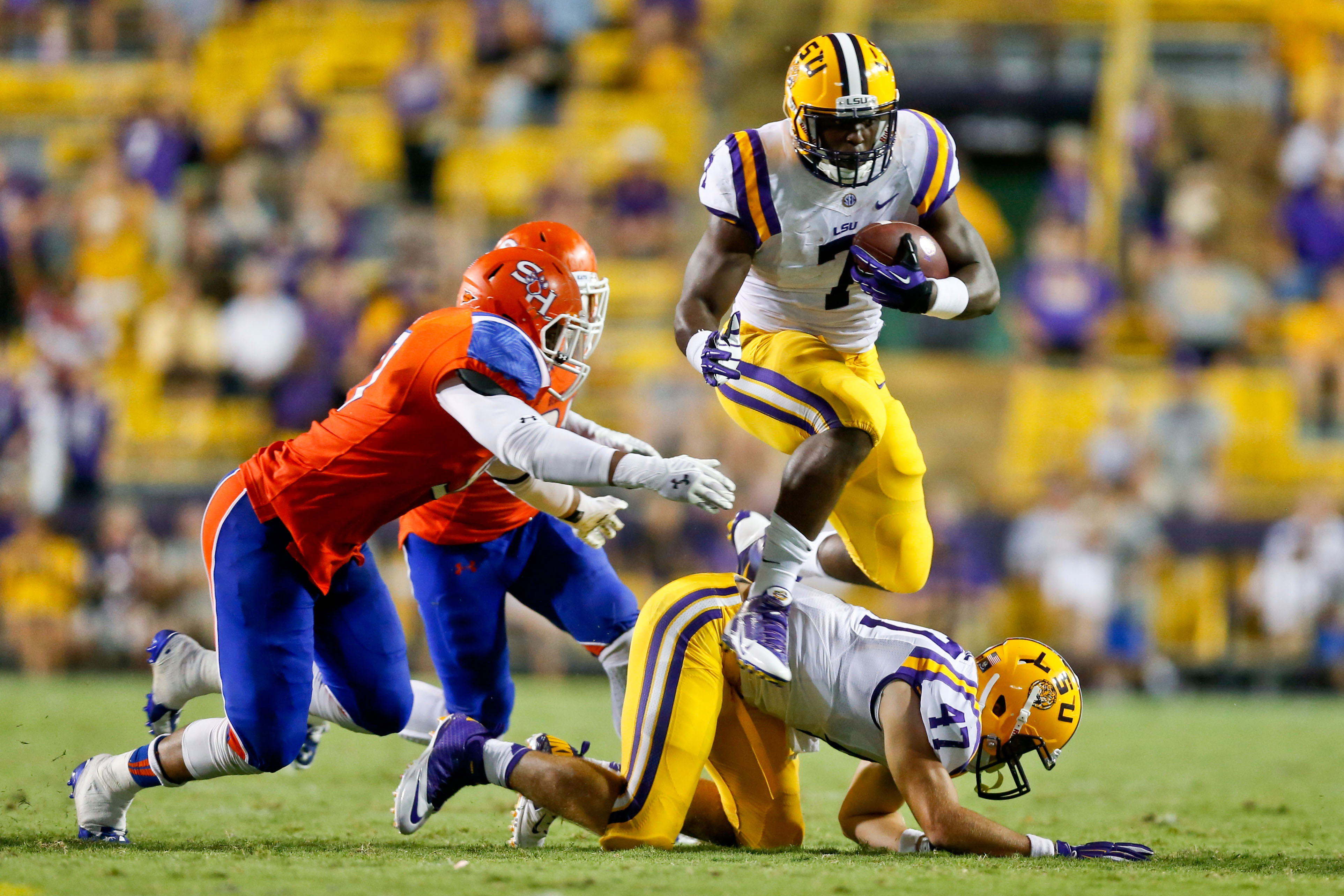 MISSISSIPPI STATE BULLDOGS (2-0, 0-0): State fans are none too happy with the win against UAB this weekend, and it's not hard to see why. The Bulldogs actually got outgained in this game -- 548 yards to 516 yards -- and while the passing defense held the Blazers quarterbacks to a 47 percent completion rate, it got lit up when UAB did connect. -- to the tune of almost 27.2 yards a completion. Speaking of quarterbacks with completion rates under 50 percent, both Dak Prescott and Damian Williams were a bit erratic after Dan Mullen decided to play duck-duck-goose with his quarterbacks early in the game. There's a chance that Mullen was just experimenting for some reason, but if he wasn't, this could be an early sign of some trouble for Mississippi State.

MISSOURI TIGERS (2-0, 0-0): It's still a bit early to make any sweeping pronouncements about the other other Tigers, given that their competition has consisted of South Dakota State and Toledo. But Toledo had gotten a favorable (if somewhat wonky) betting line, and was playing at home. Didn't matter. Mizzou blew the doors off the Rockets from the start, piling up a 35-7 lead by early in the third quarter. When Toledo cut that to 35-21, the Tigers tacked on two more touchdowns before Toledo hit a field goal to make the final score 49-24. Maty Mauk is 34-of-53 for 503 yards, eight touchdowns and two interceptions. If you want to find a fault, it's that the Tigers have allowed their opponents to gain 4.3 yards a rush and 10.9 yards a completion without facing a Power 5 team yet; we'll see whether any of that is foreshadowing when they face an SEC defense at South Carolina against Georgia.

OLE MISS REBELS (2-0, 1-0): Ah, Mr. Ole Miss Beat Reporter, you should have added a "yet" to your headline. Jeremy Liggins did take to the field in what I'm calling the kaiju package, because what else do you call a package that has a defensive lineman taking snaps as the wildcat quarterback? It wasn't terribly effective -- Liggins gained nine yards on four carries -- but it was kinda terrifying. And it was about the only thing that didn't work, as the Rebels more than tripled Vanderbilt's total offensive yardage (547-167) and rolled to victory against the Commodores. It doesn't look like Ole Miss will be truly challenged until the game against Alabama on Oct. 4.

SOUTH CAROLINA GAMECOCKS (1-1, 0-1): Want to see the difference a completely healthy Mike Davis can make? South Carolina's rushing against Texas A&M: 3.0 yards a carry. South Carolina's rushing average against East Carolina: 4.6 yards a carry. Dylan Thompson's completion percentage against A&M: 50 percent. Dylan Thompson's completion percentage against East Carolina: almost 65.8 percent. Some of that, of course, is due to the fact that the Gamecocks were facing American Athletic Conference talent instead of SEC talent (whatever else you might want to say about the Aggies defense). It's not just a cliche to say that the Gamecocks are a different offense without Mike Davis than with him, but it's also not enough to make a convincing case that South Carolina can beat Georgia.

TENNESSEE VOLUNTEERS (2-0, 0-0): Through the early going, it looks like the strength of Tennessee's team is going to be the defense. The Volunteers have held opponents to a total of 12 points in the first half, and have as many sacks (four) as touchdowns allowed. A.J. Johnson already has 18 tackles on the year -- not to mention an interception and a forced fumble -- and Jalen Reeves-Maybin isn't far behind with 16. The caveats will fade a bit after Tennessee travels to Oklahoma this weekend, and by the time they're done playing Florida on Oct. 4, we should have a firm idea of how good this team really is.

TEXAS A&M AGGIES (2-0, 1-0): We're two games into whatever Kenny Hill is doing, and six Aggies already have more than 100 yards receiving this year: Malcome Kennedy (170), Edward Pope (131), Speedy Noil (126), Ricky Seals-Jones (112), Josh Reynolds (109) and Sabian Holmes (107). And most of those yards have been catches coming from Hill, who is 61-of-86 for 794 yards and seven touchdowns so far. Again, this is South Carolina and Lamar that we're talking about, so take it with a grain of salt. But writing off A&M this year looks to have a grave mistake for those of us who did it.

VANDERBILT COMMODORES (0-2, 0-1): Vanderbilt might have a legitimate threat at running back. Now, if only they had a team to put around him. Ralph Webb gained 95 yards on 18 carries Saturday against Ole Miss after rushing for 70 yards on 14 attempts against Temple. That means he averaged at least five yards a game in each of those performances. It almost means his rushing total accounted for almost 59.9 percent of Vanderbilt's total yardage against the Rebels. At his current clip, Webb would end up with 990 yards, so he has a shot at a 1,000-yard season -- until teams start accounting for him, and then things could get even worse for the 'Dores. 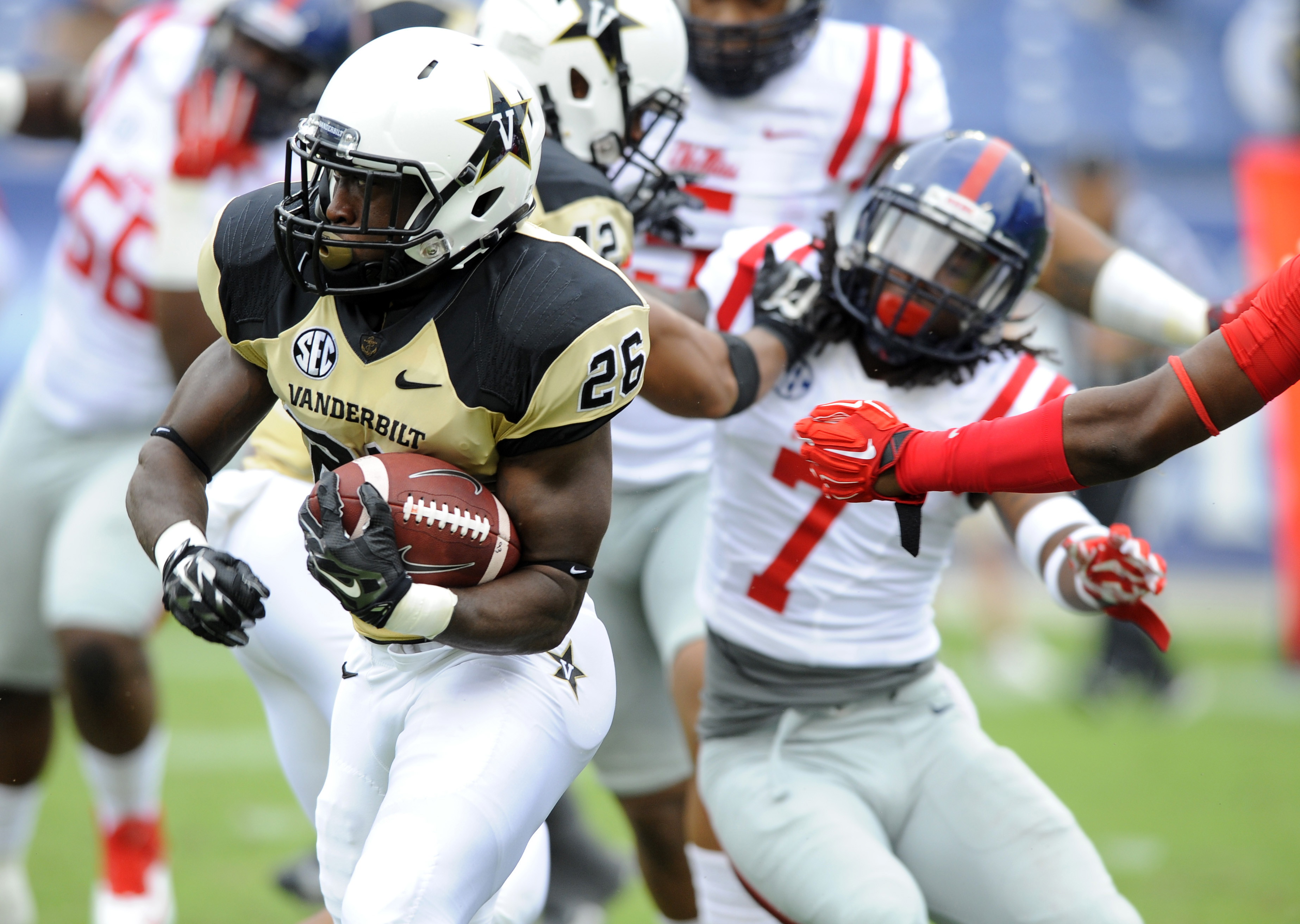