When I rechecked the SEC Media Days schedule yesterday, I smiled knowingly. Steve Spurrier's visit to the main ballroom at TheHyattRegencyWynfreyHotel was scheduled for 9 a.m. local time on Tuesday. Perhaps not intentional, but perhaps a way to make sure that reporters -- a group that is generally late to rise -- would be in attendance for the entirety of today's session.

Because there's no one that the media loves quite like Steve Spurrier (with the possible exception of Robbie Caldwell). It's not just Spurrier's famously unguarded tongue, though that's enough of a draw. But even some of the more banal statements that Spurrier makes are enlivened by the way he says them in his thick Tennessee drawl and peppers them with "this, that and the other."

And then he gets a question about the "Bonham Trophy" that South Carolina and Texas A&M will play for -- honoring a hero of the Alamo -- and Spurrier does what Spurrier does best.

I'm actually from Tennessee. I always was taught the hero of the Alamo was Davy Crockett, so this was a new one on me.

It's a good story, I'm sure Bonham did some good things. I always thought Davie Crockett was the hero of the Alamo, he and those 33 Tennessee guys that came in there and got killed, so forth (laughter).

So the trophy was a little surprising to me. I'm sure this guy Bonham was a hero and did a lot of good, after I read the story.

If they want to do a trophy for it, that's fine. I didn't know it was official yet. We've got a little trophy with Missouri, because they're Columbia and we're Columbia. They call it the Mayors' Trophy, the mayor of each town. We've been fortunate enough to keep that one at home the last couple of years. I don't know that you can have a trophy for every game. Up in the Big Ten they have a bunch of them, several of them.

If they want to do it, that's fine. I just don't know how many games you're going to have a trophy for as you go through the season.

While you're at it, coach, why is it that the SEC has had so much luck winning the national championship lately?

I think one thing that helps us southern schools is the game is usually played in the south. We don't have those championship games in the snow. A lot of Big Ten teams, the northern teams, play in some bad weather. Playing in the south has got to help us a little bit, or in California.

The thing that sometimes gets overlooked about Spurrier, and part of what gives him the competitive reputation that he's earned, is that the man has a steel-trap memory about his accomplishments and records, as well as those of his team. Without thinking about it, Spurrier recalled correctly that he's 0-5 against Auburn since taking the helm at South Carolina -- and said South Carolina is 1-9 against them in school history. Close; he missed a tie. 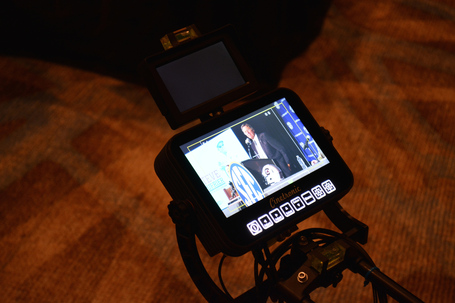 Asked about his USFL days, Spurrier said: "But the second year we were 14‑4. The Birmingham Stallions were 13‑3, beat us in the playoffs that year." Spurrier was again off slightly. Not about his Tampa Bay Bandits, who were 14-4, but about the Stallions, also 14-4. It's a forgivable slip-up, given that the coach was talking about games that were played 30 years ago.

All of which leads to the inevitable question: How long will Spurrier keep coaching and keep entertaining the press at SEC Media Days? Even he professes to not know.

Yeah, Pat Dooley always told me, I'll coach longer at South Carolina than I did at Florida.  He may be right.  We don't know yet, but he may be right.

As long as Spurrier's showing up, the media likely will as well.