Closing Arguments: At Mississippi State, Dan Mullen's Job is Harder Than You Think

Share All sharing options for: Closing Arguments: At Mississippi State, Dan Mullen's Job is Harder Than You Think

A final thought on each team before the 2012 season begins. Inspired by Off Tackle Empire

It's not easy to win in the SEC. Let's go ahead and get that out of the way up front. And because SEC teams spend a majority of their time playing other SEC teams, that makes it all a bit tougher to consistently string together winning seasons.

With all that said, there are just two teams in the SEC that are currently below .500 all-time. One of them is probably easy to guess: Vanderbilt. But the Commodores are not alone, and they are not even the SEC team with the worst all-time winning percentage. That would be Mississippi State.

As with everything, there are a few caveats. Mississippi State is not at the bottom of the barrel when it comes to all-time winning percentage in conference games (.336); that distinction belongs to Vanderbilt (.250), and Kentucky (.317) comes in 11th among the 12 current SEC teams that have actually played in the league. Those are the only three teams below .400.

(The worst winning percentage ever belongs to Sewanee, which went 0-37 in conference play over eight seasons before wisely deciding that SEC football wasn't its thing.)

But when you take into account all the games that a team has played, State lags the field pretty badly. The Western Division Bulldogs are 38 games below .500 and 44 games behind Vanderbilt. This is not a record of distinction as the program begins its 114th season. (State started playing football in 1895, but did not play from 1897 to 1900.) 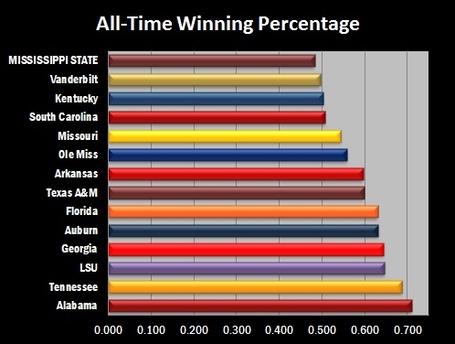 And it's not like Mississippi State hasn't had some great seasons. The Bulldogs went 10-0-1 in 1940 -- the only undefeated season of more than five games in school history -- and had a 10-win season as recently as 1999. And while no one mistakes Mississippi State for an SEC powerhouse, they're not necessarily someone you automatically lump in with Vanderbilt and Kentucky in terms of futility.

All of which is to say that when you hear that Steve Spurrier had a difficult job in Columbia or James Franklin (VU) faces a tall task in Nashville or Joker Phillips or his successor is up against the weight of history in Lexington, keep in mind that they could have it worse.

They could have Dan Mullen's job. Of course, with the Bulldogs sitting at 21-17 and with a good chance to put another winning season in the books, Dan Mullen is doing his job pretty well right now. Which is something that fans have historically not been able to say about Mississippi State's head coach often enough.