A final thought on each team before the 2012 season begins. Inspired by Off Tackle Empire

On one hand, Tennessee is fighting for nothing more this season than to get things back on the right track. A return to the postseason is necessary. Going to a bowl somewhere around the Chick-fil-A Bowl or even higher in the pecking order would be preferable. Knocking off one of the SEC East teams they're currently looking up at -- Florida, Georgia and South Carolina, possibly soon to be joined by Missouri -- would be even better.

But when it comes to the place of this season in the overarching narrative of Tennessee football, the Volunteers need to get back to being a relevant team in the SEC again. Because we're entering what could be the eighth season of a pretty steady decline in the fortunes of the program in Knoxville.

It's not quite that simple, of course -- 2006 and 2007 weren't tragically bad seasons, even by the higher standards that Tennessee held itself to. Tennessee won 19 games over those two seasons and an SEC East title. Of course, those seasons were also sandwiched between the two years that cost Phillip Fulmer his job.

But when you look at the trend line, it's pretty clear that the program has been headed in one direction since 2004. 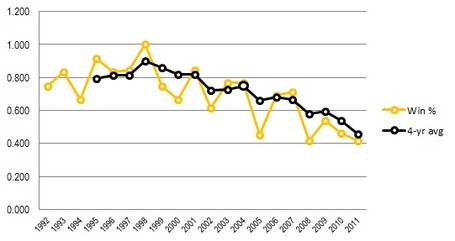 That slightly larger dot you see there on the four-year average line is 2004. And even the highest point after that on the straight winning-percentage line, the 2007 division title, is a little deceptive. There was more pixie dust involved in the Vols' 2007 season than in a Broadway production of Peter Pan. In the course of that season, Tennessee was leveled by Florida in a 59-20 blowout in the Vols' first SEC game, lost by 24 points to Nick Saban's worst Alabama team, beat South Carolina because of a well-timed false start (by Tennessee), got past Vanderbilt by a single point and needed four overtimes to beat Kentucky.

There's a reason Georgia fans have a ton of "what-ifs" about the 2007 season (though they should probably start with the Vols' 35-14 demolition of the Dawgs in a game that really wasn't even that close).

And when you look at the games that matter most -- those against the SEC -- the trend is even more striking. 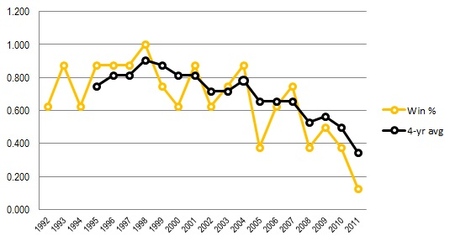 Of course, the last few years have been challenging in part due to the self-inflicted wounds of a poor coaching choice after Fulmer was fired in 2008 and replaced by interim head coach Lane Kiffin. Derek Dooley has been trying valiantly to rebuild the Volunteers brand, but the SEC is not exactly a forgiving league in which to rebuild.

Which can take a toll on a program's prestige over the long run. Consider this: The last time Tennessee won the SEC, current freshmen were probably four years old. They were likely still in middle school the last time the Vols won the division. The high-level recruits, the ones that Tennessee or any other team needs to compete in the SEC, probably don't have a living memory of Tennessee as a perennial contender.

There's a lot of optimism in Knoxville these days, and rightly so. The Vols have some great players and are about due for some good luck. And it's hard to say that a program as storied as Tennessee will ever be more than a recruiting class or two away from re-establishing itself as one of the conference's elite. But at some point, you have to start wondering when what looked like a bump in the road is in danger of becoming something more like the new normal.