No, there aren't any SEC teams, but that doesn't mean it won't be a good game.

So here we are, the first time since January of 2006 that an SEC team hasn't been in the national championship game. Eventual 10-3 Georgia sniped the conference championship away from eventual 11-2 LSU, but the Tigers wouldn't have crashed the USC-Texas party anyway. And that game between the Trojans and Longhorns? It was a modern classic. A thoroughly entertaining game through the end. A bar that other national title games aspire to. There won't be any national title bragging rights for the SEC this time around, but if we get another game of that caliber, it's worth it to have the conference sit out the title game once or twice a decade.

In any event, it's kind of remarkable to note that, despite spread offenses taking over the sport over the past decade, this is only the third national title game featuring a pair of spread attacks. The participants are natural fits, though, as those other two games featured key elements from this one. The 2008 season's national title game was Urban Meyer's spread option from Florida against Oklahoma's uptempo passing spread, while the 2010 season's national title game featured Oregon and then-offensive coordinator Mark Helfrich going up against Gus Malzahn's spread and Auburn. Today's game not just a showcase of two of college football's best teams, but also one for college football's offensive creativity.

Plenty is on the line for both teams. Oregon has been in the upper echelon of college football for a while, but there's nothing like a national championship to cement a school's status there. Ohio State is in the process of exorcizing demons from past years—first by defeating Alabama from the SEC, and now, potentially by winning a national title game after back-to-back losses from the 2006 and 2007 seasons. Ohio State is undoubtedly playing for some Big Ten pride too, although the reaction to an OSU win is more likely to be about how far ahead the Buckeyes are from the rest of their league than a restoration of said league's status. But if we're talking conference pride here, count Oregon in on that facet too. The Pac-12 is great and getting better with an impressive roster of coaches, and a win for the Ducks can help national perception catch up with that reality.

1Megacast. If you remember how ESPN offered up several options for watching last year's national title game, well, the Worldwide Leader is cranking that up to 11 with its "Megacast". Film Room is back for ESPN2, where coaches—including Mississippi State's Dan Mullen, Urban Meyer's former offensive coordinator at Florida—will break down the game. That one is your best bet, if you ask me. You might also enjoy ESPN Classic's Sounds of the Game, where the only audio will be from 100 microphones throughout the stadium, and the spider cam feed on ESPN3 could be good too. Hit the above link to see all of your options. The SEC Network, for its part, is showing classic basketball games and SEC Storied films. Presumably it was going to do a live Finebaum call-in show had Bama beaten Ohio State. Maybe next year.

2Goin' deep. When you think about a third string quarterback making his first meaningful appearances in the conference title game and a playoff game, you don't think about chucking it deep. Cardale Jones doesn't care about your conventional wisdom. All four of his touchdown passes in his pair of starts were at least 39 yards in length, and he has six other completions of at least 20 yards. Oregon hasn't let opponents get a ton of long passes—they've allowed just eight pass plays of 40 yards or more in 13 games against I-A teams—but you can bet that Jones will test that pass defense throughout the night.

3Sitting Ducks. The string of injuries for Ohio State's quarterback position is well documented, but Oregon is more shorthanded on offense in this one. The Ducks lost their best tight end Pharaoh Brown in November, then the third-leading receiver Devon Allen went out on the opening kickoff in the semifinal game. Last week brought more bad news with second-leading receiver (and tops in yards per catch) Darren Carrington being suspended for failing a drug test. It's getting to the point that a receiver who was lost for the season with an ACL tear last spring has been considering burning his redshirt to play. Leading receiver Byron Marshall is still set to go, but only one other Duck who will play has caught more than 25 balls on the season.

4Marcus Mariota vs. OSU's Pass Defense. The 2014 Heisman winner got his team here with one of the best seasons a quarterback has had to date. He currently has the fourth-best passing efficiency mark ever, just a sliver behind Jameis Winston's 2013 Heisman campaign and a bit behind Russell Wilson and Robert Griffin III in 2011. He'll need to be on his best game agains the Buckeyes' defense, which is fourth nationally in pass efficiency defense. The Bucks are also tied for fourth in the country with 24 interceptions on the season, led by Vonn Bell and his six picks. Oregon's passing attack, even as it's shorthanded, is better than the standard fare OSU saw every week in the Big Ten, but Blake Sims had one of his worst games of the year in the Sugar Bowl. This matchup is perhaps the most important to the entire game.

5 OSU rushing vs. Oregon run defense. Deep down, Urban Meyer is a power rushing aficionado in the mold of his mentor Earle Bruce and his boyhood hero Woody Hayes. He chooses to go about it differently than those guys did, but make no mistake: he's old school at heart. Oregon's run defense was only middle of the road nationally, allowing 4.15 yards per rush. With Ezekiel Elliott carrying the primary load and Jones being able to be the QB hammer between the tackles that Meyer once had in Tim Tebow, OSU's run game will put significant stress on the Duck defense. If Oregon's front seven can't stop the run well enough, Meyer will be more than content to run, run, run to try to close out the game.

Devin Smith, WR, Ohio State: Remember those four deep touchdown passes from Jones I mentioned earlier? Smith caught all four. Despite being third on the team in catches, he leads the Buckeyes in receiving yards with 886 on just 32 receptions. That comes out to an amazing 27.7 yards per catch, the most nationally among qualifying players. In a game full of electric stars, he has the highest potential for making big plays. If you see Jones wind up to chuck it deep, Smith is most likely the guy he's targeting. 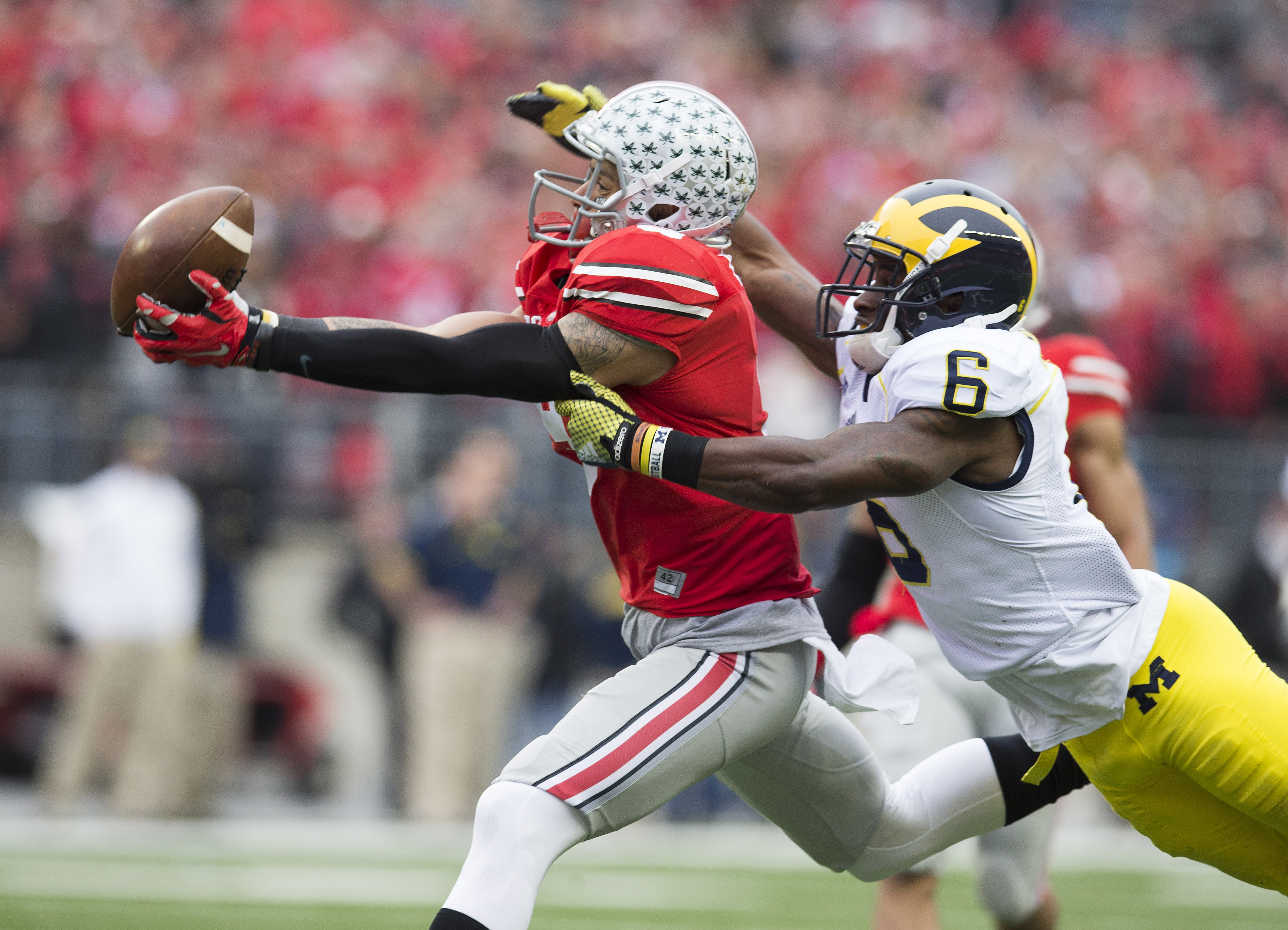 Royce Freeman, RB Oregon: With so many of Mariota's top passing targets out, the Ducks will need a big day from their leading rusher. The freshman Freeman has been excellent all year, rolling up 1,343 yards at a healthy 5.6 YPC clip. He's not a home run threat with his longest run on the season being just 38 yards, but he's a steady and reliable presence in the backfield. Only twice has Freeman been held under five yards per carry by a Power 5 team: once in the blowout win over FSU where it didn't really matter, and again in October against Arizona when Oregon picked up its only loss. The Ducks might be able to get away with another substandard game from Freeman here, but it's not likely.

Joey Bosa, DE, Ohio State: Joey Bosa is a bad, bad man. The outstanding Buckeye D-lineman has 20 tackles for loss, 13.5 sacks, and four forced fumbles on the season. He's the kind of disruptive end where it's probably best just to run plays away from him rather than try to figure out how to block him consistently. If someone is going to get Mariota flustered and out of his game, if such a thing is even possible, Bosa is most likely the guy to do it. Keep an eye out for him on every snap he's in the game.

Oregon is the favorite and for good reason, as the Ducks both avenged their sole loss with a blowout win over Arizona in the Pac-12 title game and ran the regular season's only undefeated team off of the field in the Rose Bowl. Ohio State has proved it belongs, though, with a long streak of great play after its early season stumble against Virginia Tech. The Buckeyes are the more SEC-like of the two contestants, although both teams put an emphasis on team speed. This is a great national championship game matchup because I can easily see it going either way. In the end, I'll take Urban Meyer with more than a week to prepare over just about anyone. I'd love to see a program win its first ever national title, but tonight won't be the night for Oregon. Ohio State 38, Oregon 35