Thursday marked the last four-game day of the SEC baseball tournament and the end of the road for at least two more teams, as we get into the part of the bracket where every day brings another round of eliminations. It also marked the day when a couple of teams found their offenses and might have revived their chances by doing so. And it set up a couple of fine games today, with the winners advancing to the single-elimination semifinals. 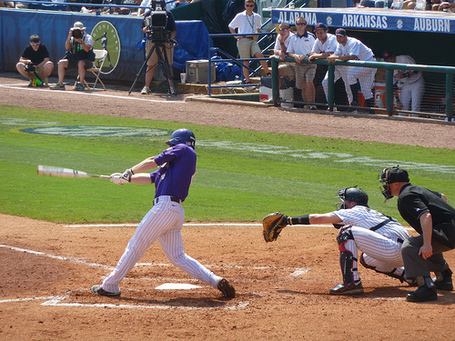 PodKATT of ATVS via farm8.staticflickr.com, with permission and under Creative Commons

LSU 11, Ole Miss 2
The Tigers had a 4-2 even before they broke things open with a five-run eighth inning, which included six hits and an Ole Miss error as LSU batted around. Meanwhile, Bayou Bengals starter Kevin Gausman allowed seven hits but just two runs in seven innings of work, striking out seven batters. The Rebel Black Bears pitchers all shared in the loss, with each of the half-dozen players to take the mound giving up at least one run.

Kentucky 5, Mississippi State 1
The Wildcats finally figured out how to beat the Western Division Bulldogs. It started with a solid outing from Jared Grundy, who allowed just four hits and an earned run in six innings. Alex Phillips relieved him with three hitless innings that featured only two Bulldogs getting on base -- one through a walk and the other getting hit by a pitch. Mississippi State burned through several pitchers, but only Ross Mitchell, who threw just 14 pitches in 1.2 scoreless innings, seemed to be able to figure the Wildcats out for an extended period of time.

South Carolina 5, Auburn 3
The Tigers became the first team to lose at Hoover after scoring three runs in a game. It has not been an offensive showdown in Hoover this year. But Michael Roth and Matt Price pitched well enough to give the Gamecocks their thirteenth consecutive 40-win season, and the Gamecocks offense took care of the rest. Adam Matthews was 3-for-4 with a pair of RBIs and a run. Tanner English was the only position player without a hit on the day. Auburn exits the SEC tournament and perhaps the season with the loss.

Vanderbilt 2, Florida 1
The Commodores moved one step closer to an unlikely championship by defeating the Gators largely with pitching. Sam Selman walked four but allowed just two hits in six innings of work. He also struck out seven -- which on its own was more than the four hits Florida managed all night. Not that Vanderbilt was that much better; the Commodores never had more than one hit in an inning, including the two-run fourth.

(1) LSU vs. (7) Mississippi State, 4 p.m. ET, CSS / ESPN3
Next to Vanderbilt, the Western Division Bulldogs have been the best story of the tournament. But the loss to Kentucky likely blunted the momentum that had carried Mississippi State through the first part of the week. Besides, asking any team to play LSU, Kentucky and then LSU again in back-to-back-to-back games is a bit much. The Tigers take the game and move to the semifinal game.

(3) Florida vs. (2) South Carolina, 30 minutes after LSU-Mississippi State, CSS / ESPN3
This is sort of the game you wanted to see near the end of the season. The regular-season series between these two teams came while the Gamecocks were struggling to get themselves on the right track in the SEC. Now, we get a showdown with both teams in late-season form. The main question in this game is what South Carolina will do when the game goes to the bullpen; it's hard to see Ray Tanner asking Price to pitch again after throwing 41 pitches Thursday night. But the Gamecocks have used their bullpen more sparingly this week and just feel like they've been playing better baseball lately -- and that gives them the edge in this one.