According to the Sports Business Journal, the SEC is planning on starting up its own TV network. The report itself is paywalled, but the Sporting News' Matt Hayes gave us the good stuff:

UPDATE: The full article is now available for free at the Sporting News website.

Let's take these in reverse order.

CBS is a broadcast network, already reaching every home in America with a TV. Expanding the reach of the conference means nothing to it because it receives no subscription fees from viewers; everyone gets CBS for free regardless of its programming. Also, CBS only gets to broadcast one SEC game per week during the season plus one prime time game. Adding more schools to the conference doesn't give CBS any more "inventory" to televise; it will continue to only broadcast one game a week plus one prime time game.

The question on CBS's rights fees in particular is this: did adding Texas A&M and Missouri materially increase the value of the best SEC game in any given week? The answer is probably not, because neither of those two is more valuable than the conference's existing bankable schools. That CBS is not sure it wants to pay a whole lot more is not surprising in that light. ESPN, on the other hand, will be ponying up plenty more thanks to two more schools' worth of games and the conference's expanded reach.

The creation of a real SEC Network is where the value in adding Texas A&M and Missouri was. The key to the conference network is to get it on expanded basic cable/satellite (not some exotic sports tier) for every subscriber in the league's footprint. Not only does maximizing the population mean a greater audience to sell to advertisers, but also more subscription fees.

Here's how expansion changes the game for the conference's population, using the July 1, 2011 estimate: 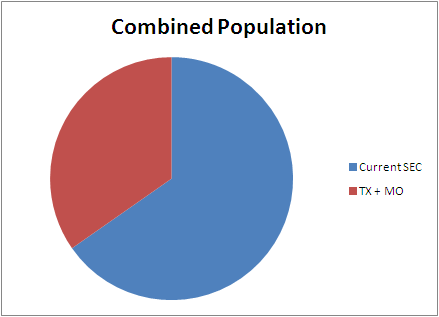 Adding Texas and Missouri increased the conference's population by 53%. Those two states will make up slightly more than a third of the new SEC's total population base. It's not just Texas pulling the weight here; at 6 million residents, Missouri will be the fifth-largest SEC state. It trails fourth place Tennessee by only a small margin of roughly 400,000.

The logistical questions are still out there, of course. Will it be a joint venture with Fox, like the BTN, with ESPN, like the Longhorn Network, or wholly owned by the conference like the Pac-12 Networks? (Update: sounds like ESPN will be involved one way or another). Will it be up and running by 2014? Can Slive get wide carriage ahead of the official announcement like the Pac-12 did, or will it be a slog to get it out there like the Big Ten Network was and Longhorn Network still is?

We'll find all of that out later. The big news is that the SEC is not going to voluntarily leave money on the table by not running its own network. That's good news for all the athletic departments' budgets, and it's good news for any of you out there wishing you could watch replays of old football games through the long offseason drought.