Changing the World, If Only for a Night: Utah Defeats Alabama

Share All sharing options for: Changing the World, If Only for a Night: Utah Defeats Alabama

At some point Friday night, everyone watching the Sugar Bowl came to the same conclusion: This is not a fluke. The better team is winning this game.

You can talk about the absence of Andre Smith all you want -- and anyone who doesn't think line play is important needs to only watch a recording of this game. You can ponder whether Alabama was "ready" for the game or not, whether they "bought into the hype" or not. You can talk about missed kicks and Julio Jones' dropped passes and the like all you want. But the better team won.

If you were to break this game down by quarters, Alabama really only "won" one of them: the 2nd. Utah steamrolled them in the first, building up a 21-point lead that would have been enough to win the game. The Tide's offense was held to 208 yards -- 31 of them rushing -- a single TD and 15 first downs. Utah contained Julio Jones (7 receptions, 77 yards), though Jones helped some by dropping some passes he would normally grab. CB Robert Johnson had two interceptions, while his teammates on the front seven often had Alabama QB John Parker Wilson scrambling for his life. Stevenson Sylvester had three sacks in the game.

Utah QB Brian Johnson, meanwhile, played beautifully, completing 27 of 41 passes for 336 yards and 3 TDs, often hitting receivers in stride on short- and medium-range passes that Alabama was unable to stop. The first quarter, he guided the offense to two scores in their first 10 plays. And he got plenty of time to throw; I count two sacks in the play-by-play. For the most part, the Utah offense avoided the fatal turnovers that capsize so many upset bids. They converted six of 14 third downs, often in crucial situations. 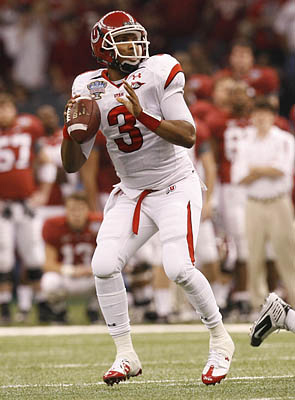 Really, would you rather have him or John Parker Wilson?

It would be easy to oversell this win, either in terms of its impact on the national picture or its effect on Alabama. After all, let's remember that Oklahoma has won two consecutive Big XII Championships after its loss to Boise State and will play for the national title next Thursday.

But the Mountain West has raised a very tricky question for the BCS: Why not us? At this point in the bowl season, the MWC might have the best two wins in the country: TCU's dominant (if only one-point) defeat of Boise State and Utah's victory Friday. Are the ACC and the Big East really more deserving of an automatic bid than the Mountain West?

As for the question of whether Utah should be voted No. 1 -- let's slow down a minute. I'm certainly not ruling out putting them in first place on my BlogPoll ballot, but there are other games to be played, not least of which is Thursday's showdown in Miami.

Meanwhile, the SEC had a good day aside from the Alabama loss, moving to 5-2 with Ole Miss' waxing of Texas Tech and Kentucky's bizarre comback against East Carolina. Those games, particularly the Ole Miss win, should not be dismissed in considering how the SEC has done this postseason.

Utah's victory, though, will be remembered far longer. As well it should. It's naive to think that the college football world will be reordered after Friday's game. But, for a short while, the Utes were on top of that world.