Share All sharing options for: An Appreciation: Kenny McKinley

EDITOR'S NOTE: Fifth in a series honoring those who spent four years in the SEC -- for better or for worse.

There was nothing notable at the time about the fact that, on Sept. 24, 2005, Kenny McKinley failed to catch a ball in South Carolina's 45-20 rout of Troy. After all, McKinley was not a yet a star of the Gamecocks' offense, and South Carolina will still getting far more attention nationally for its new coach, Steve spurrier, than for anything happening on the field.

No, there was nothing remarkable about the fact that Kenny McKinley went a whole game without a catch. Except that it was the last time it would ever happen.

For the rest of his college career, spanning 43 games, McKinley was the one thing Gamecock fans could count on despite a ferris wheel at quarterback, an offensive line that couldn't block a punching bag and a run game in which positive yardage was often far more elusive than the backs themselves. He was going to catch the ball at least once, and often several more times. 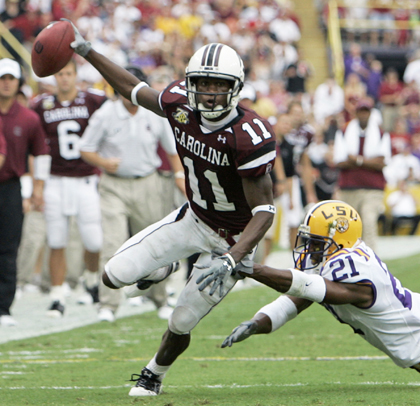 If he looked like he was doing all by himself -- well, sometimes he was.

His statistics for an individual game weren't always that flashy -- he would not have his first 100-yard game until five games into his sophomore campaign, and would end up with seven scattered over his last three seasons -- but in a position as bedeviled with inconsistency as wide receiver, there's something to be said about being in the box score week after week.

And his importance to the Gamecocks could not be overstated. How coincidental is it, really, that South Carolina lost by a TD at Vanderbilt in a game McKinley left early and lost 14-7 a week later against Georgia? We might never know for sure, but it's hard to score points when your main offensive weapon is gone. The Gamecocks also looked punchless in games against Wofford(!) and UAB.

McKinley for too long played in the shadow of Sidney Rice, and he never saw his team play for an SEC title or, really, for anything more than an Outback Bowl trophy.

That's a pity. His talent -- and, most of all, that consistency -- deserved a bigger stage.