Share All sharing options for: An Appreciation: Mohamed Massaquoi

EDITOR'S NOTE: Fourth in a series honoring those who spent four years in the SEC -- for better or for worse.

Perhaps one of the most interesting seniors to leave the SEC this year is Mohamed Massaquoi, who made a career of flashing his brilliance in between bouts of near-irrelevance.

Massaquoi played from the beginning at Georgia, earning an All-American Honorable Mention nod from The Sporting News and an Offensive Newcomer of the Year award in a year where he ranked second in the number of catches for the Dawgs, who won an SEC title. Massaquoi had 505 receiving yards that year, including a 108-yard, 1-TD performance in a 31-30 loss to Auburn.

Then, for a long while, he stopped looking like the next big thing. Despite leading the team in receptions in 2006, he had more than 50 yards receiving in just two games (back-to-back losses to Tennessee and Vanderbilt). He would finish with 366 yards. And despite four 50-plus performances in 2007, Massaquoi would finish with just 491 yards that year.

All of this left Georgia fans a bit frustrated.

We will remember Massaquoi’s sophomore slump, but we will forget that he still led the team in receptions that year. We will conclude that the 2005 offensive newcomer of the year and Sporting News freshman all-America honorable mentionee failed to live up in his last three seasons to the hype he generated in his rookie campaign. We will remember the afternoon he seemed like he couldn’t catch a cold and will pretend that a bad game made the fans justified in cheering when he was taken out of the lineup.

But, even in the "down" years, as the Mayor points out, Massaquoi still had moments where his impact on the game was unmistakable.

We will find a way to overlook six catches and a touchdown in a 15-12 win over Georgia Tech in the year in which he supposedly played so terribly. We will manage to ignore a tackle for a 20-yard loss on a botched punt to set up a touchdown against Oklahoma State. We will, if we try, succeed in forgetting his 84-yard touchdown reception in last year’s win over the Gators, or how he earned the True Grit Award at the end of spring practice and proved he deserved it by playing with all the guts and heart in the world in his last home game against the Yellow Jackets [in 2008].

That last home game that the Mayor mentions was arguably the high point of Massaquoi's career -- 180 yards and 3 TDs on 11 catches. "Arguably" because the Dawgs lost, 45-42, the sorry denouement to a regular season that was supposed to lead to Georgia playing in the national title game. 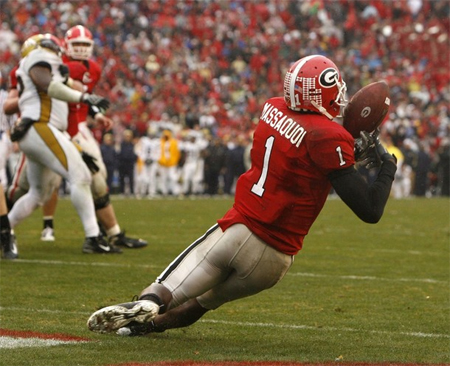 Even so -- if the team disappointed this year, Massaquoi didn't. His game against Georgia Tech was one of four in which Massaquoi had more than 100 receiving yards, including a 191-yard day against Kentucky. He had three more days when he totaled more than 50 yards receiving.

Despite those lackluster games, Massaquoi ended the year with 920 yards and 8 TDs on 58 catches, ranked fourth in receiving yards in the SEC and third per game.

By then, he had already been surpassed both on the field and in the public eye by the next great Georgia wideout of the future: A.J. Green, who ranked first in the SEC in receing yards and yards per game despite having two fewer catches than his older teammate.

So don't, in your list of great SEC offensive players in a season that featured too few, overlook Mohamed Massaquoi. His reputation ended up a lot more disappointing than his career.