Share All sharing options for: An Appreciation: Britton Colquitt

EDITOR'S NOTE: Second in a series honoring those who spent four years in the SEC -- for better or for worse.

Is there another kicker or punter out there by the last name of Colquitt? Because odds are he'll end up at Tennessee. 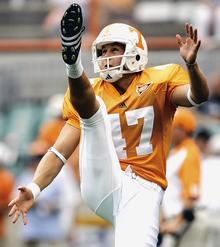 Or maybe it will just be one of Britton or older brother Dustin's children in a few years. Britton was the fourth Colquitt punter for Tennessee -- but he seemed to make more headlines during his time on Rocky Top by imbibing, eventually losing his scholarship because of it.

According to the Knox County Judicial Commissioner's Office, Colquitt hit a parked car [in February 2008] and then fled the scene. According to police reports, when officers stopped Colquitt, he admitted to drinking and driving as well as to hitting the car and a tree stump.

Police said Colquitt smelled strongly of alcohol, his speech was slurred and he was staggering. ...

Colquitt, who decided to return to Tennessee for his senior year and not to enter the NFL draft, was suspended from the team as a freshman in 2004 when he faced multiple alcohol-related charges stemming from several incidents. He was reinstated later in the year after he pleaded no contest to a charge of underage alcohol consumption.

A judge sentenced him to nearly a year of probation and Colquitt was required to complete a youth alcohol program, pay court costs and stay out of trouble to keep his record clean. He also pleaded guilty to two more underage consumption charges.

A fourth charge of underage consumption and one for driving under the influence were dismissed.

I hope that Colquitt can keep things on track and get a chance in the NFL, because he is a good punter. As in, he averaged almost 42.6 yards a punt during his four years at Tennessee, and never had a season average below 41.2. That's the kind of consistency a team needs from its punter -- even if it didn't help the Vols in Colquitt's freshman or senior seasons (both sub-.500 campaigns).

In those two seasons, Colquitt could sometimes outgain his offense. Example: He punted nine times for 408 yards against South Carolina in 2008; his team gained 207 yards on offense, or just more than half Colquitt's total.

In a mediocre period for Tennessee football, one standard of excellence remained the same: The foot of a Colquitt.