Share All sharing options for: An Appreciation: Casey Dick

EDITOR'S NOTE: First in a series honoring those who spent four years in the SEC -- for better or for worse.

On Nov. 5, 2005, Arkansas QB Casey Dick took the field for the first time in his college career. By the time the game was over, Dick had what was arguably one of the most average performances in the history of his positions: 12-of-24 for 137 yards, 1 TD and 1 INT. Arkansas would lose to South Carolina, 14-10, though I still don't know how the Razorbacks managed not to win after easily outgaining the Gamecocks in total yardage, 356-187, and having tied South Carolina in turnover margin, 1-1.

He would consider that impressive level of mediocrity for the rest of his college career, driving thousands of Arkansas fans to distraction along the way. 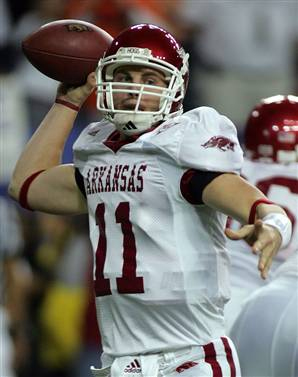 Casey Dick, about to either cheer or infuriate thousands. No way to tell which.

Dick played in nine games during the Hogs' 2006 SEC West Championship season, though he attempted more than 10 passes in only five of them. Temporarily overshadowed by Mitch Mustain, he came back to guide Arkansas to a win against, coincidentally enough, South Carolina after Mustain's first pass was picked. He then went 2-3 in Arkansas' last five games, including an awful 3-for-17 performance against LSU three weeks after the South Carolina win. In fact, Dick would not complete more than 50 percent of his passes in the last four games of that year.

In 2007, he was far better, completing more than 80 percent of his passes a couple of times. (One of those times, he attempted only 10 passes, as South Carolina tried valiantly to bolster Darren McFadden's Heisman candidacy.) He had the best TD-to-INT ratio of his career. And Arkansas went 8-4 in the regular season, then lost to Texas Tech in the Cotton Bowl.

Then came 2008, and new head coach Bobby Petrino's pass-happy scheme. Many, self included, were skeptical of Dick's ability to play at all in Petrino's scheme, much less play well. Whether he played well or not depends on your perspective. He ended up with the best completion percentage of his career (57.4 percent), but had an 11-to-14 TD-to-INT ratio before Petrino decided to start Nathan Dick -- Casey's brother -- against Mississippi State.

But Nathan Dick couldn't keep the Hogs going against LSU, as a 14-3 first quarter lead turned into a 23-14 halftime deficit. Petrino once again turned to Nathan's underappreciated older brother, who then had one of the best halves of his career: 18-of-29, 197 yards, 2 TDs and no interceptions. Casey Dick also led a last-minute TD drive that gave Arkansas the 31-30 win.

That might be Casey Dick's legacy at Arkansas. He never won the Hogs an SEC title, and could cost them a game, but he also sometimes came through at the most unexpected moment, rallying Arkansas to an impressive victory here or an upset win there.

There's something to be said for that.