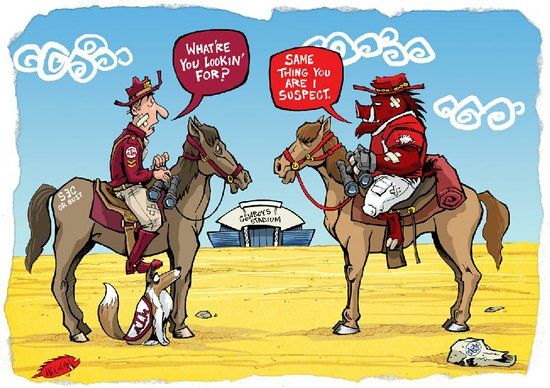 A average slate of games to start off a new Fanpost series!

Hello all SEC Fans, MACnation and Little 10/12 Trolls and that guy who doesn't even care about football and just somehow clicked on this particular fanpost. Let me welcome you to the first of my new series of Fanposts on Team Speed Kills. A little disclaimer: I AM NOT a writer for TSK...all views are from my (sometimes crazy) point of view and do not reflect the views of TSK. Though I wish I was a main stream writer for TSK (maybe one day?), I will do regular Fanposts to keep you guys entertained, talking and chatting over some views of a fellow SEC fan.

It's SEC Week 4 and you know what the means! Conference play is swinging into full gear! Enough of the cupcakes, neutral site nonconference game and the same old crap about how great Ohio State is...it's time to see who may emerge the front runner to win the toughest conference in the country. So far that team is Ole Miss, but I think quite a few fans are looking into the Texas A&M and Arkansas matchup...not because it's a great game, but to see how Texas A&M looks against a fellow SEC opponent. We also get to see if Tennessee is going to either be out of the East race early if they lose to a average Florida team, or come away with a nice victory and keep hopes up in Knoxville that the SEC East Title could still be a possibility. And if you really want to see a nice upset pick, then look no further than Ole Miss and Vanderbilt...wait whoops. Wrong game! Look no further than Missouri at Kentucky, where Missouri is going to need a lot more than 9 points to get out of Lexington 1-0 in conference play. There is some other games out there...an intriguing matchup between ULM and Alabama is a highlight. Watch The Old Ball Coach troll all with a hot UCF team coming in having won 1 of its last 5 games (20%!). Enough talk though, grab you some nachos and enjoy these score predictions for Week 4 in the SEC! All Times are CENTRAL

GAMES NO ONE CARES ABOUT (Current Record: 0-0)

Fresh off a 50-31 win in The BoomBox Classic (yes Southern and Jackson State have a rivalry game called The BoomBox Classic), Southern's two game winning streak is going to end at the hands of the Georgia Bulldogs...who apparently all of the sudden have a record setting QB. I expect to see a 100% pass completion and NO LESS or I will not trust this Georgia squad ever again. Southern Miss 2 Georgia 100%
GIF Explanation: Apparently UGA is alive and well...the last few games saw him taking a nap. Just in case Georgia gets into a little trouble with Southern, they can release the secret weapon...

ULM 1-1 vs Alabama 2-1...3 PM
ULM comes into the game fresh off a 34-31 OT victory over the Arkansas Razorbacks only 3 years ago. Now I doubt Alabama doesn't win this by at least 4 TDs, but you never can tell with the LSU, Louisiana-Lafayette and perhaps even some Nicolas State rejects. Satan (Saban) will make ULM wish they didn't schedule Bama' after Ole Miss. ULM 34-31= 3 Alabama 34+31= 65 GIF Explanation: I couldn't find anything really good, but here is what a typical Hog fan thinks of ULM still to this day...

THE 11AM UPSET SPECIALS? (Current Record: 0-0)
Syracuse 3-0 vs LSU 2-0-0-1 (cancelled)...11 AM
Thinking of Syracuse makes me laugh. Any time your mascot is not an animal, gunslinger or weather phenomenon, you know the mascot name will make you laugh. BUT A COLOR? :/sigh. The MIGHTY ORANGE PAINT BRUSHES ARE COMING FOR YOU! TIGERS BEWARE (of course I mean the Auburn one). I always take these 11 AM games and give the home team 7 points...so enjoy your free 7 Orangemen. Orange Paint Brush College of the Syracuse 14 LSU 31 GIF Explanation: Lol Orange Fans...

South Carolina 1-2 vs UCF 0-3...11 AM
Now I usually take some precaution with 11AM games against FBS Schools, but this one I feel like I shouldn't. I mean come on...UCF lost to an FCS school at home! However, considering that South Carolina doesn't have an offense, this should be a low scoring 3 TD win for the Gamecocks...it should...right? South Carolina 27 UCF 6 GIF Explanation: Lets have a moment of silence for the old South Carolina teams that made me want to watch every game for them...we send you off with a resounding boom...Amen...

General SEC Football Games (Current Record: 0-0)
Vanderbilt 1-2 vs Ole Miss 3-0...6 PM
Derek Poppins just got a "spoonful of sugar" last week, and will now get a "spoonful of hell". I guess for Vandy fans it would be nice if they just competed and only lost by 4 TDs, but I don't think that will happen. On the side note, Ole Miss just beat Alabama if you didn't hear the news...so that was cool. Perhaps some more helmet passes in the play book for Ole Miss? Wouldn't be surprised. Vanderbilt...A Spoonful of Land Shark Defense...so 0 Ole Miss 42 GIF Explanation: With the 1% chance of Vanderbilt winning, Derek Poppins has a little dance that someone has gotten on Video...enjoy...

Kentucky 2-1 vs Missouri 3-0...6:30 PM
After a 7-6 okay 9-6 win over the feared Huskies of Connecticut, Missouri may have their hands full against an ever improving Kentucky squad that really needs to win this game if they want some momentum for the rest of the year and possibly make a bowl game. This game was my upset pick for a while, but I still think Missouri will win...barely. American Pharaoh (Kentucky) Triple Crown in TDs 21 Missouri Tigrrs 24 GIF Explanation: WARNING: YOU MAY BE SCARED FOR LIFE...This here is an inside look at a typical private Missouri Practice...used by most colleges for the o-line...

Tennessee 2-1 vs Florida 3-0...2:30 PM
Rocky Top really needs to get to 1-0 in SEC Play here, and even though Florida has some key losses due to suspensions, Tennessee has a tremendous amount of pressure. Starting off 0-1 would hurt...especially if Arkansas somehow wins and gets momentum with games against Alabama and Georgia that may be ever more important if Tennessee wants to content for the SEC East. Florida can also get out to 4-0 in the first year of the Post-Muscrap era. Vols take this one by a TD. Tennessee 28 Florida 21. GIF Explanation: Tennessee is my choice...you can agree with Kirk if you want, but hey...I would agree with someone who was "leaning towards " Arkansas to win the SEC West (sarcasm)...

Mississippi State 2-1 vs Auburn 2-1...6:30 PM
The loser of this game will be my choice to be 6th place in the West (7th Arkansas). The Gus bus is getting starting to lose some gas as Jacksonville State smashed a windshield, and LSU punctured the tires. A win over MSU would certainly get the Bus rolling again, but I don't think the new QB at Auburn is any better than the pre-season favorite for the Heisman. Mississippi State also needs a win, but I don't think they are in as bad a shape as the lesser Tigers (the greater is LSU of course). Sorry Auburn...this year you get to join Arkansas in a possible repeat of the 2012 season (both Auburn and Arkansas were at the bottom). Mississippi State 27 AWWBURNINGBUS 10 GIF Explanation: Gus also plays musical instruments in his free time...he was seen last week against LSU during garbage time practicing for Gus Bus entertainment on the drive back...

THE SEC GAME OF THE WEEK! (These Games count as two on the overall record...Currently: 0-0)
THE TEXAS A&M AGGIES 3-0 vs THE ARKANSAS RAZORBACKS 1-2...6 PM
You remember when Arkansas lost to Toledo we said Holy Toledo? A&M better win or people are going to start saying Holy Hog! This game is sorta like the new school bully vs the old school bully that has a full body cast and is getting his lunch money stolen by the kids in the Chess Club. But, both teams are 0-0 in conferense games, and most of the Hogs have played in Jerry World (though A&M did play in Houston and put up a whooping against the Cloudy Devils)...and this is the damn Southwest Classic. I think we see a fun game, but A&M will eventually get a stop sometime in the 2nd half to put away the Hogs in a shootout. Texas A&M 38 Arkansas 28 SEC Game of the Week's get two GIF's: Texas A&M GIF- What Kevin Summlin really thinks about the Arkansas game (and Kingsbury's comments)...

Arkansas GIF- On the subject of Kingsbury I have some footage of how things went between him and Bielema after the game...all I can say is, "He got his ass kicked"...

Sorry about the changes in font size on some of these predictions by the way. I was trying to fix them...but everything I tried made it A LOT worse. Sending you guys off with more GIF...have a great day and please leave comments, recs and shares! Thanks! GIF Explanation: It may not happen, but this guy represents the rest of the SEC...I think Alabama is going to get back into rage mode again after a loss...

See you guys next week. Note: Also check out the more professional team speed kills post for SEC predictions (and vote in my poll below!).

Who wins the SEC Game of the Week? Texas A&M or Arkansas?