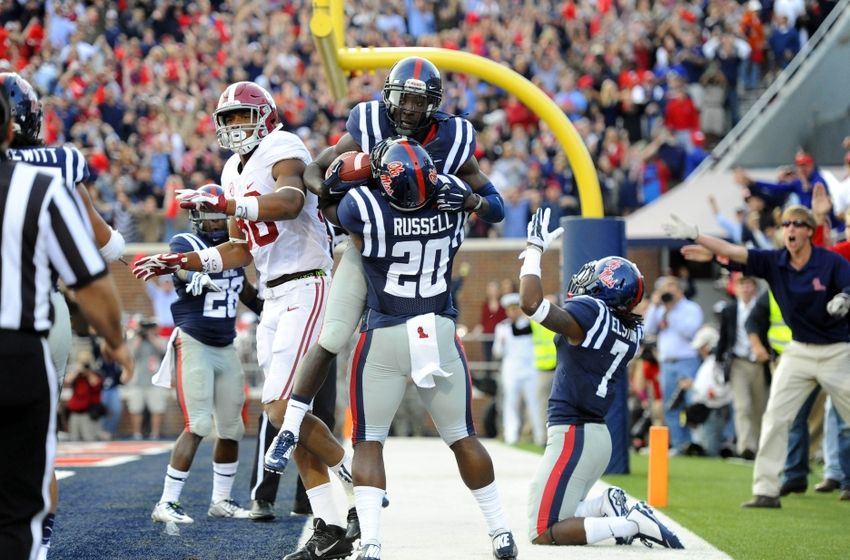 Every SEC football season is jam-packed full of rivalry games and upsets that leave a bitter taste in the losing team's mouth for a full year. These are those special games that you circle on the schedule once it comes out because you get a chance to redeem yourself and exact revenge for last year's loss. Last season in the SEC was full of these type games, but let's take a look at the Top 10 revenge games for the 2015 season.

The Alabama Crimson Tide have dominated this series as of late, beating the Tennessee Volunteers in the last eight straight meetings. This season, Tennessee has a much improved team and would like nothing more than to end Alabama's winning streak in front of the Tide faithful. Look for the "Third Saturday in October" to start having a little bit of meaning again, starting this season.

If you are Aggie fan then last season's game against Alabama had to make you question your loyalty. The Tide ran wild on A&M, making the Aggies look as if they didn't even want to be there. It was a much different look compared to the two years prior, when both games cam down to the last possession. This season, Texas A&M will welcome Alabama back to College Station, where they hope to exact a little revenge for last season's embarrassing loss.

Last year Mississippi State went to LSU and seemingly did the impossible. They held off a late Tiger rally and won a night game in Death Valley, against a Top 10 team no less. This year, the Tigers will travel to Starkville, where they will look to take advantage of a Bulldogs squad that lost a lot of talent. Don't be surprised if LSU uses this Week 2 matchup to make a statement early in the season.

Last season Georgia was posed to win the SEC East and compete for a spot in the College Football Playoff, but that dream hit a snag with an early season loss to the South Carolina Gamecocks. The Bulldogs missed a late field goal attempt that would have tied the game and kept their title hopes alive. This year's Bulldogs look to be even stronger, and once again have Playoff aspirations. We can expect the Bulldogs to make sure they don't slip up against the Gamecocks again this season, and take care of business when South Carolina comes to town in Week 3.

The 2014 Alabama/Arkansas game was a prime example of a team wasting opportunity. The Crimson Tide were having to come from behind on a wet, muddy field on the road, and needed help in order to win. That help came in the form of a late game interception from Arkansas that allowed Alabama to put together a game-ending drive and barely escape defeat. This year's Arkansas team should be much improved and would love nothing more than to travel to Tuscaloosa and break the hearts of the Tide faithful, much like what had happened to them in Fayetteville last season.

Over the past couple of seasons the Auburn Tigers have had a handful of miraculous wins that seemed almost impossible. Well, during last season's matchup with the Texas A&M Aggies it seemed that their luck ran out. Auburn fumbled the ball twice late in the game, which also fumbled away their shot at a spot in the College Football Playoff. The Tigers will surely want to make up for that mistake when they head to College Station this season.

The "World's Largest Outdoor Cocktail Party" is always one of the most anticipated rivalry games in the SEC. Last season saw a heavily favored Georgia Bulldogs team go into Jacksonville and lose in convincing fashion to Florida. The Gators and Bulldogs are always eager to beat each other, but this season's game will hold special meaning to Georgia, who is looking to make up for last year's lopsided loss to a Florida Gators team that would go on to finish the season at 7-5.

Earlier in the article I referenced Auburn's miraculous victories of the past few seasons. Well, the 2014 meeting with Ole Miss was definitely one of these. The Rebels saw themselves closing in on a victory against the Tigers, who were also a Top 5 team at the time. What appeared to be a late game-winning touchdown pass ended up being a fumble when Rebel reciever Laquon Treadwell injured his leg after being tackled from behind one yard short of the goal line. You can bet that Ole Miss would love nothing more than going into Auburn and stun the Tigers in similar fashion.

If there is one game that LSU would like to replay from last year it would have to be the Arkansas game. True, LSU lost a handful of games, but the way that the Razorbacks beat them was something that defined the Tigers' season. What started out as a promising year ended in disappointment and an 8-5 record for the Tigers, with the worst loss coming from a blowout at the hands of Arkansas. If Les Miles wants to prove that LSU is still the highly ranked program that it was just a few years ago then he needs to return the favor when the Arkansas Razorbacks come to town.

If there was one 2014 SEC game that stood out among the rest then it was the Alabama Crimson Tide and the Ole Miss Rebels. The Rebels handed the Crimson Tide a very close loss after a late game interception that sealed the deal. It was a game that set the SEC West on the course for one of its most heated races in years, and also opened the door for teams around the nation to jump into the Playoff spotlight that Alabama had fallen out of. However, the loss proved not to be as devastating for the Tide as it had originally appeared. Alabama still managed to win the SEC and make it to the Playoff, but that isn't the point. The point is that Ole Miss upset Alabama, and you can bet that Alabama is ready for a shot at redemption when the Rebels travel to Tuscaloosa in Week 3.