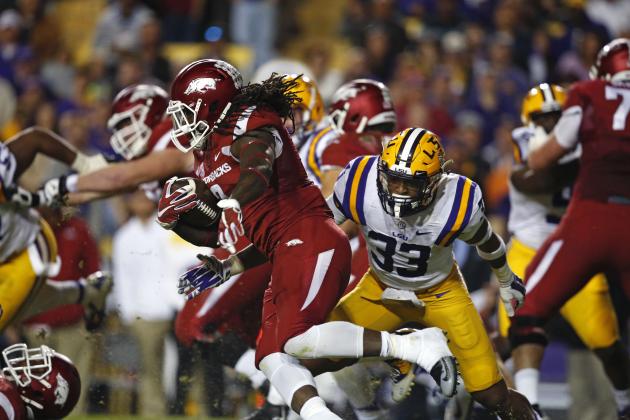 Don't want to be a homer here, but Arkansas is one of the best teams in the SEC right now...

Back at the beginning of the year, Arkansas was 1-3 and mostly out of the bowl picture. Most thought whoever said that Arkansas could rise again were put down immediately. Fast forward to today, and nobody wants to play Arkansas. Just imagine...if Arkansas has JWill and Keon, this team may be 9-1 right now. Now there is still 2 more games left this year, but Arkansas may very well finish 8-4 (6-2 SEC...6-2 IN THE SEC WESTERN DIVISION) and most likely ranked (RANKED). In other SEC news, MSU lost (as expected) but was blown out on 3-4 key plays (unexpected). LSU's dreams died in Death Valley (ironically the place where "Dreams Come to Die"...guess it lives up to its name). Vandy also rises...they tack on another conferense win to stay alive in the race for bowl eligibility. Those are the main highlights...lets get on to the rankings.

The Gamecocks are out of the running for a bowl...the first SEC team this year to earn that title. However, they can still help out a little bit...though it's unlikely they still have Clemson...and beating them would make this season at least a little worthwhile

They did beat a good BYU team...I will give them that. But can they get just one more SEC win to get to a bowl? The best chance comes this weekend against Tennessee...but I don't know about Arkansas...

Vanderbilt picked up another SEC win over the bottom of the SEC...but let me tell you something. They didn't do that last year...and they are doing it this year. Progress...maybe it's in small steps...but it's progress.

7-3 and #10 in the SEC? Yes sir! Texas A&M is just not a true competitor in the SEC West, collapses are now the expected norm of these Aggies.

Auburn, AL will be in anarchy if they lose to Idaho this week...because Alabama won't even be close anyway. Idaho is terrible...but if they SOMEHOW lose this game...they won't be bowling. This may be the most important game of the year for Auburn right now...and that is saying something.

Georgia finishes the SEC slate with a good 5-3 SEC record. However, they just could not play competitive with the top dogs in the SEC and that is why they are in Toilet Bowl territory.

Tennessee becomes bowl eligible after beating another cupcake. This team is kind of like Georgia...they have an OKAY record, but really, who have they beaten? Toilet Bowl it is...

It's okay Bulldogs...everyone gets their butt kicked against Alabama. They can't let their guard down though...they have 2 tough games at the end of the year...and finishing 7-5 will tip them into Toilet Bowl country...

Ole Miss had a bye week to get the improbable 4th and 25 out of their head...are they going to come out against LSU with an attitude? We shall see...

Why you may ask...is the Arkansas Razorbacks #3 with losses to Toledo and Texas Tech? Well consider that they are #2 in the SEC Western Division...and have gone 3-1 in SEC road games against 3 ranked teams and 3 100000+ stadiums. If that isn't the SEC top tier...I don't know what is.

Survive and advance is the key for the Gators...and they have survived and advanced quite well. Florida State will be a big game...

The Iron Bowl will be the least exciting one in many years against Auburn...especially with this Alabama team. Barring a major collapse they will be in the SEC Championship game...

Thanks for stopping by everyone! Vote down in the poll below, share, rec and comment! Have a wonderful week! See you guys next week. -Joshua

Which story has been the biggest surprise in the SEC so far this year?