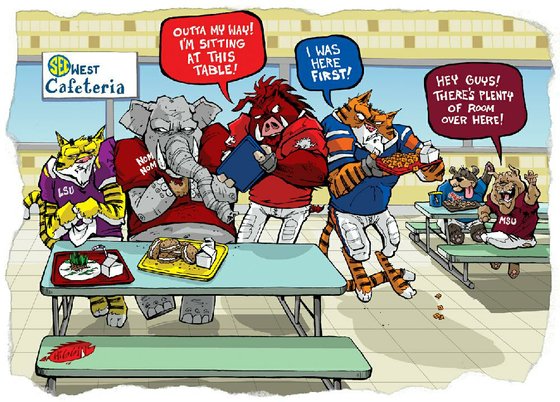 Why does the SEC have to be so weird all the time?!

So how is everyone doing? That is all that can be said after another week of SEC football concludes. The sun rose this Sunday, and the realization that Ole Miss just got it's butt kicked by Florida seems to dawn on me now. 38-10. Scrolling through the stats i realize...holy crap...Alabama kicked Georgia's butt too. 38-10. I look further down the score board and then cry over how hard it will be to make a power poll after Kentucky used OT to beat Eastern Kentucky (sarcasm). In all seriousness, who the heck is the best in the SEC? So instead of putting the top team FIRST, I put them last so I can think about it while going from the bottom up. Most importantly, feel free to put your own SEC Power Poll in the comments below! On with the madness!

I really don't want to put Vandy down at the bottom. They just have such a great defense that I can't help but feel bad for these guys time and time again being brought down by the offense. But, this is a team game, and overall Vandy is overall still the worst in the SEC. I like this team, and next year I have them in a bowl. But, for this year, the defense stays home because of the offense.

Man...another team I don't want to see fail...mainly because I don't want to see Steve Spurrier leave. But, with little to no offense...a defense that is good but not great...and a coach that seems to be searching for answers that will never be there...and that is a recipe for South Carolina not making a bowl. No bowl means no Steve Spurrier in my opinion...and no Steve Spurrier means that this South Carolina team may spiral down into a state of anarchy for a few years. I am not a fan of the Gamecocks, but football Gods please give them a miracle so I can Spurrier can stay for a few more years...I beg of you!

Butch Jones ruined another 14 point lead...but this time it happened in the 1st Half. Against Arkansas, Tennessee had about 3-4 opportunities to win this game...all of them pretty simple with the right play calling and execution. Neither of those opportunities were taken advantage of, and now this Vols team is staring an 0-4 SEC record right in the face with an angry Georgia and salty Alabama team coming up. This Vols team is teetering dangerously close to not making a bowl if they can't get 1 out of the next 2.

San Jose State put up a good fight, but Auburn got the W. The run defense for Auburn is in a state of despair...but the offense did look better. However, it still won't get it done against teams like Alabama, LSU and Ole Miss...but this Tigers team at least gets to a bowl game...barely.

Mathematically, Arkansas is still in contention for the SEC West Title. Realistically, this Arkansas team should make a bowl. I know. They have some tough games coming up. But the defense looked SALTY after the 1st quarter, and the running game, o-line, and quarterback play has improved. This Hog team does have some things to improve...like Red-Zone efficiency...but I don't see any reason the Hogs wouldn't be 6-6 at the end of the year (Auburn, UT-Martin, MSU and Missouri all look like winnable games)

Whew. Breathe a huge sigh of relief if you are a Kentucky fan. Kentucky wouldn't have been even close to #8 if they lost, but a win is a win...and I am sure Kentucky fans will take it. Eastern Kentucky came to play...and boy did they almost pull it off. Fortunately Kentucky woke up and forced Overtime, took care of business, and ran away with the W. After all the crap Kentucky has been through the past few years...I think the fans will take it.

Though Mississippi State is out of the SEC West race, this team can still make a little noise in the SEC West with games against Alabama and Ole Miss still to come. They are still very one-dimensional and it cost them against Texas A&M. The defense also has plenty of holes...surrendering a huge chunk of yardage to the Aggies. Still, this team has some talent...and has Dak to keep them going.

Should have saw that coming. Georgia doesn't know how to play in these big games and Bama beat them into a fine pulp. However, this team did have some errors that gave Bama 14 free points...so without the blocked punt and int return...its a respectable 24-10. But...those mistakes happened, and the Bulldogs lost 38-10. They need to regroup quickly, because a desperate Tennessee team that needs a win looms this week.

That was unexpected. Florida sneezed and coughed to a 38-10 beat down of the Ole Miss Rebels in the Swamp...and watching this game you would think that Ole Miss had the flu. The good news is that they played an SEC East team so it won't affect the SEC West Race much. The bad news is that they better beat Texas A&M and LSU...because three losses in the SEC West puts them out of the race. Thank goodness for New Mexico State.

No words can describe what happened in the Swamp this past Saturday. If the flu is the new steroid that is legal...hit me up. That was an absolute walloping against an Ole Miss team that averaged about 50 something points a game and was salty on defense. Now that Florida is in the driver seat for the SEC East all of the sudden, the question remains if that win was a FLUke or a sign of the rise of the Gators...

A&M continues a nice little season it has going for them with an impressive win over the Bulldogs of Mississippi State. I can't put them on top however until I see them play the big boys however. Still, A&M keeps getting better and better each week...so there is no reason to believe yet that this season will be like the last.

How many times do you see a team down at 5th in the SEC West be at #2 in a power poll? Alabama rolled over the Bulldogs this past Saturday and looks like a rabid elephant (if there is such a thing) hungry for a championship. They can't overlook Arkansas this week...and there is no reason to think they won't (see last year). Bama is back.

They are Number 1...for now. I didn't like that win against Eastern Michigan...and it doesn't make me feel good if Fournette goes down. This Tiger team needs to wake up at QB and Wide Receiver...the cupcakes won't last forever. But, maybe I am being to harsh. This team impresses me still. Maybe they were overlooking the little Eagles. But this #1 Ranking will go away in a hurry if they don't wake up at some positions.

Thanks for coming to another one of my fanposts! I appreciate it! Vote down below!