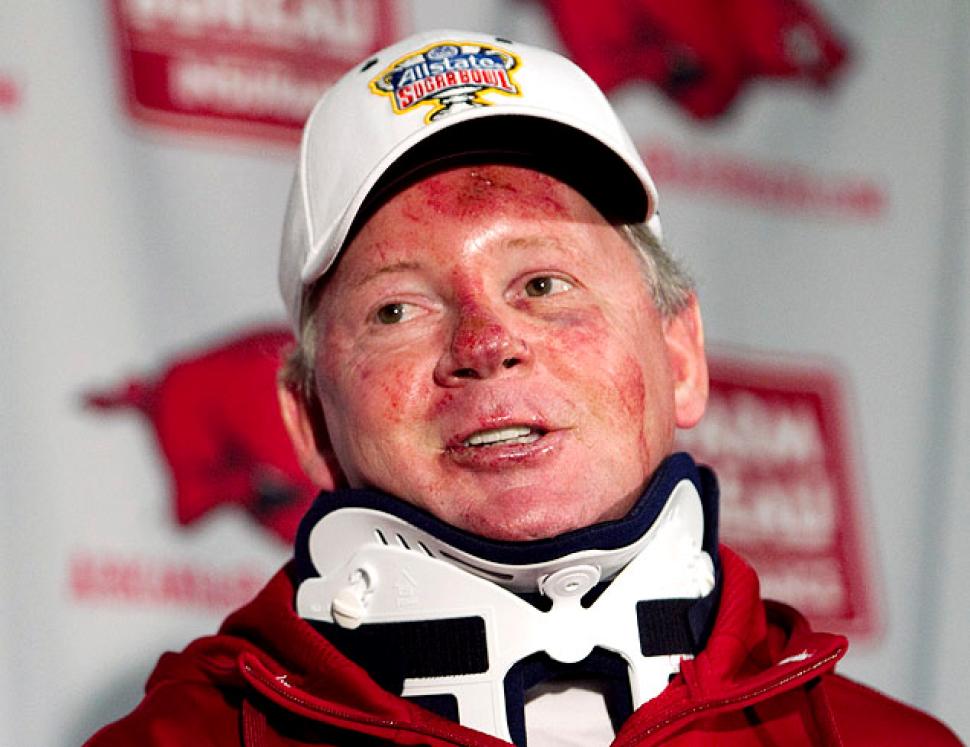 Fresh back from surgery...yeah um I have some explaining to do...

SO guys...how have you been doing? If you remember about 2 weeks ago, I had to go visit my friend in the hospital, and made the trip out there to help him recover. Well, driving back, I saw old Bobby on his motorcycle and the idiot crashed into the side of the car...which then in turn made my car hit the nearest light pole and knock the tar out of the car and me. So I am still here in Wichita with my family as I am recovering from surgery, and have finally gotten back to writing...sorry about the long break guys. Also, shout out to the Vanderbilt Blog (Anchor of Gold), for giving me a laugh before I wrote this. I was looking through the Fanposts and saw the Power Polls from previous weeks, and got to read what others thought about me making a fool out of myself. Go check out the Power Polls there each week as you can have a chance to get your comment on an SEC Team on Team Speed Kills' weekly Power Poll Analysis. On with the Rankings!

For the past 3 years, Missouri has always been picked to be a joke in the SEC East Race. Looks like 3rd times a charm...

A bye week to get their minds straight after such an emotional, huge, big, maybe the best SEC Win of the Year against Vanderbilt...sorry for being sarcastic...man getting a second chance (sorry for the drama) at life and won't change my ways:(.

The Expectations are going up very fast for Vanderbilt fans...don't do it you guys...just look at Auburn and Arkansas this year.

Because of Auburn's schedule, they aren't going to make a bowl...though they look a lot better than they were earlier this year. Maybe they can beat Idaho?

The University of Kentucky will make a bowl this year...I think. I thought this last year...then they went off and lost all their games...don't make me look like a fool...AGAIN!

The mighty Bulldogs are still pups this year...wait, is UGA shrinking in size? Why is this happening? After an hour of searching the web...I find out its because Nick Chubb is injured

The Vols get to munch on some much needed cupcakes to make it to a bowl this year...barring a total collapse. Wait, isn't this season all about Tennessee's total collapses? It won't happen...I think (glances at 2014 Kentucky)

The Hogs get to munch on one much needed cupcake to try and totally make the SEC West a huge mess this year. Seriously, Arkansas may do it. Ole Miss play their 10th straight game of the year and LSU will most likely limp into Tiger Stadium to play the physical Hogs...it's setting up just like last year.

A 6-2 team this low? What?! Well lets consider that the teams they have beaten: Mighty Southern Miss, Northwestern State, Gus, Troy, Louisiana Text, and United Kingdom. Then consider the teams they lost too: LSU and Texas A&M (who is overrated...AGAIN). The cupcakes end soon though...after Missouri they play Alabama, Arkansas and Ole Miss.

Hey remember last year when they went to overtime with the Hogs? Then they got their @$$ kicked by Bama and Ole Miss? It's happening again!

After a Toledo like loss to Memphis, Ole Miss got back on track against TAMU. So if the trend plays out correctly, Ole Miss will lose to Auburn and Arkansas, but beat LSU and Mississippi State...AWESOME!

The Gators had a bye week to get ready for a potential trap game against Georgia. The way the SEC has worked this season? They lose by 21.

Tennessee was the Arkansas this year...down 14-13 in the 4th Quarter (would have laughed if Tennessee won by this score)...but came back to win 19-14 (would have been more if Alabama chose the Touchdown late). The bye week is much appreciated...as the showdown with Tony the Tiger lurks.

The old Hilltoppers gave the Tigers a GREATTTT Effort for a few quarters, but a heavy dose of Frosted Flakes (part of a balanced breakfast), helped refuel the Tigers and get the W. "Got Milk?" is the theme this week as the Tigers get a bye week to rest up the bones that they hope don't break against Alabama next week.

Thanks for viewing the Power Poll guys and make sure to Share this (or Rec this)! I appreciate it! Also comment suggestions or maybe your own power poll. Be sure to vote in the poll below! Have a wonderful week everyone! God Bless! -Joshua

Let's Be Kids Again: WHAT IS YOUR FAVORITE HALLOWEEN CANDY? :)