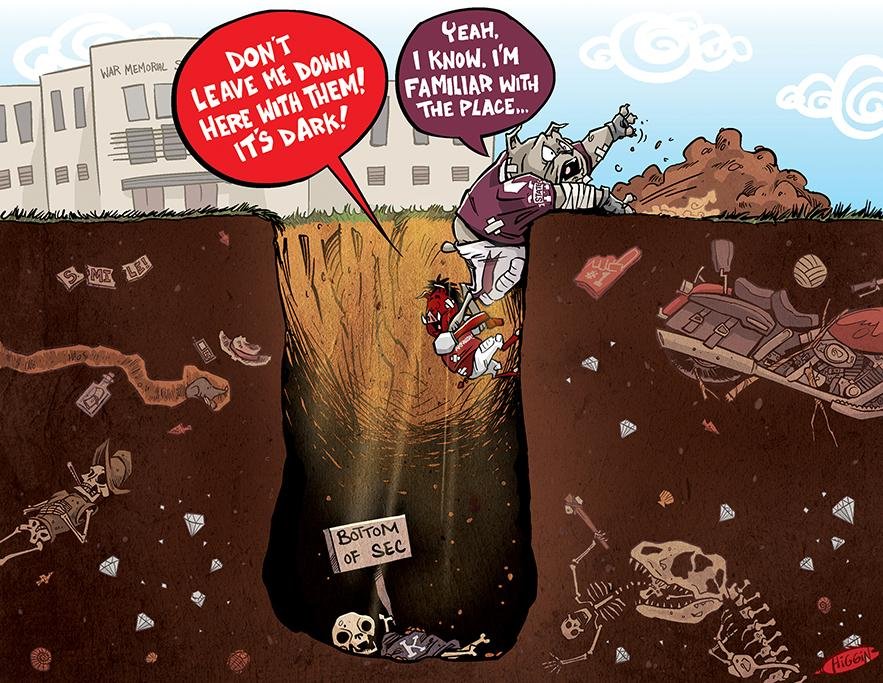 We have a new bottom dweller...and they are already pulling away...

Remember back in Weeks 1-5 we all had a great debate on who was worthy of the last place spot in the SEC? Arkansas, Vanderbilt, and Auburn looked like the most worthy candidates...with South Carolina quietly losing in the background. Now that we are about halfway through the season, South Carolina has suddenly made me open my eyes to how bad they really are compared to those 3 teams, and that is why they are the new, probably permanent, last place team in the SEC. In other news, Alabama showed us some big time Defense against Arkansas, but the inability to finish drives and score points is a problem that needs to be fixed against a hot Aggies team...who just got a bye. LSU looked decent "at" South Carolina...though it was close for a little while. Harris finally had a good game, but it was South Carolina. We will see how he does against Florida, who just lost their starting QB...a big hit to a thin Florida Offense. I don't know if I have ever considered a 2-4 team to be better than a 3-2 team, but Arkansas has looked much better since the rough start to the year...and they wind up over Auburn. Next week will probably eliminate one of them from bowl contention. And speaking of Auburn, they can get a head start this Thursday...but they have to do it against an improved Kentucky team on the road. Enough talk though. Let's get to those Power Rankings!

Decided to Rank the Teams by Trend Right Now...Key Below:

Staying on top are the Tigers of LSU. It took a half, but the Tigers pulled away from the Gamecocks and won comfortably. Brandon Harris passed quite well, but I want to see if he can do that against tough competition. Good News: He gets to do that this week. Bad News: Florida isn't even the toughest test yet for the Tigers...they still have Bama', A&M and Ole Miss.

A bye week for the Aggies couldn't have came at a better time...they get Alabama next. I don't know how Kyle Allen and this A&M team will do against the Rolling Tide, but I do know that this Alabama secondary isn't as impressive as past year, so a few big plays are possible. How the A&M defense plays will also be key...they need to hold Alabama to less than 20 points...because A&M may not score more than 28 against this defense. We shall see what happens this week.

I don't care what the media says...that was not an impressive victory over Arkansas this past weekend. It took 3 quarters for this Tide team to score a Touchdown...against Arkansas...who is not as good on defense this year as last year. Thank goodness for the Tide's Defense though! I have some bad news however for Tide fans. If this defense doesn't show up, A&M may run away with it. Alabama may have had a let down, but a 27-13 victory (with 24 points coming in the final 18 minutes:/) over a clearly over matched Hog squad is not impressive...the Crimson Tide better wake up for the rested Aggies.

Florida is going bowling...only halfway through the season. My reaction: :0 and :P. Simply put, what a surprising Gator team that I am seeing right now. Unfortunately, I don't think it may last. Will Grier didn't take flu steroids like I though last week, but he take some PED's and will be out for a whole year. Big loss for this Gator's team. The good news: LSU is the only big boy they face the rest of the year (besides Florida State...:/), and no more SEC West teams will be on the schedule...unless they make the SEC Championship Game.

Not much to say about a win against the worst team in college football. I like this Ole Miss team, but they had WAY too many turnovers against New Mexico State (:/). Do that against LSU, A&M or another power and you will lose in a heart beat. This team is fine for now...but they need to wake up a little bit and stop turning the ball over so much.

MSU seems like the least exciting team right now, but they seem to be the only team who wins the game they are supposed to, and lose the ones they aren't. #6 seems so high for a team that has lots of holes on defense and a one-dimensional offense, but hey, they are winning and that is all that matters.

Another team that I feel shouldn't be this high...and won't be if they lose to Auburn this week. That being said though, they win the games they have too (no matter how close...Eastern Kentucky wow), and lost the one they should have (though they really almost had Florida). I like Kentucky against Auburn this week...and again, don't want them this high, but I like what I see...wins and competing.

Well here is a team that went from #3...to #8 in 2 weeks. After losing bad to Alabama, Georgia goes in and BLOWS a 21 point lead to a team that BLOWS 21 point leads themselves. Now normally, I would keep Georgia as a possible contender. Normally, I would just brush this off as a complete let down. But the situation isn't normal. Georgia just lost Nick Chubb (IMO with him they beat Tennessee by 14)...and now the question is...does the fall continue? Right now IDK...but I am going to figure them out if they keep on losing.

With so the Missouri having a bad performance against Florida, Arkansas moves up one spot. I feel so "Homer" doing this, but Arkansas shows me they can compete with the Big Boys...but is it too late? Arkansas must go at least 4-2 (at least 3 of those SEC wins...UT-Martin lolz) to get too a bowl...and the schedule favors that. Home Games against struggling Auburn and Cupcake Martin should put the Hogs at 4-4. Ole Miss and LSU right now are teetering on almost certain wins for the two and toss-ups right now...while Mississippi State and Missouri will be played at the safe comforts of Razorback Stadium. Right now...no reason Arkansas should not be 6-6 playing the way they are playing now.

This was a HUGE win for the Volunteers this weekend. After blowing games against Oklahoma, Florida and Arkansas, Tennessee finally broke through for a big win against Georgia. The only concern...they didn't face Nick Chubb and still allowed 31 points to a not very good Georgia offense without him. Still, as stated last week Tennessee needed 1 of 2...no easy task against both Georgia and Alabama...and got the job done. After the loss to Alabama, Tennessee needs 3 out of 5 to become bowl eligible...very possible with the toughest test being Kentucky.

Knew it. Without Mauk, Missouri has 0 offense, and it showed in the 21-3 loss to the Gators. The defense is decent, but without any offense what so ever, this Missouri team is just not good enough to beat good teams. A soft schedule helps the Tigers...but they aren't going to the SEC Championship this year...and that folks is a guarantee.

I like Vanderbilt right now...they have a great defense that keeps them in a lot of games. However, the offense...as preached before...is just not very good. Vandy is improving though...and I would like the chances of Vanderbilt getting an SEC win or two this year...most likely candidates are Missouri and South Carolina.

Contrary to Vanderbilt, Auburn isn't good at all. The running game is OKAY, but everything else is just crap. The QB play is mediocre...defense gets gashed...and this Auburn team is not improving...not matter what the media feeds you. Its a shame too. There is some 3 and 4...even 5 star talent on this roster, but they play like Vanderbilt should play with their 2 stars. I don't like Auburn by 2 over Kentucky...nor do I like Auburn's chance of a bowl game. Don't want to bash this team...but they just very good...really at all.

I won't talk about this team. They are bad. There is your analysis. What makes me sad/angry/confused at the same time is Steve Spurrier retiring. I know lots of people don't like him, but I always enjoyed what old Steve had to say about other teams every week. He is one funny dude, and I wish him the best of luck in his retirement...and hope he has a happy and peaceful one. Only Problem with Steve: He is like Bret Bielema in his trash talking ways, except that he always got a free pass on it. Hey I know Bret does it, but Spurrier has as well, and each time he was met with laughs and thumbs up for his comments. Just saying:/

THANKS FOR STOPPING BY! BE SURE TO REC, SHARE AND VOTE IN THE POLL BELOW! I APPRECIATE IT GUYS :)!

Vote here to give me some feedback! I want to improve and give you guys what you want...so please vote! THANK YOU SO MUCH FOR TAKING TIME TO READ MY POSTS! I APPRECIATE IT! Comment concerns if you vote 3/5 or less