SEC Attendance Was Up in 2013. What Does that Mean?

Talking about attendance numbers for an entire conference gets problematic quickly.

Share All sharing options for: SEC Attendance Was Up in 2013. What Does that Mean?

Back in February, we got some relatively cheerful news that SEC football attendance was up in 2013 over 2012.

Last year, the story was that SEC attendance was down to the lowest it had been in years. I decided to break things down by school, and you can see the results here. In short, the falling attendance was almost entirely a factor of two programs' attendance figures collapsing.

So back to 2013. Let's open things up and take a look at things school-by-school. As a reminder, these are announced attendance figures, so they are lies in most cases. Most sports teams of any kind inflate their attendance figures, so you should operate on the assumption that most, if not all, of the following numbers are higher than reality.

My numbers only include home games, so all neutral site games (including the SEC Championship Game) are not here. Also, Arkansas's figures do not include games at War Memorial Stadium in Little Rock.

Attendance was basically flat for four schools: Alabama, Georgia, Mississippi State, and Texas A&M. Their average attendance is at or near capacity.

Attendance noticeably rose at five schools: Auburn, Kentucky, Ole Miss, South Carolina, and Tennessee. Three of those had new coaches, so the rise in attendance makes sense. If the old coach got fired, then the previous year was probably a fiasco that saw falling attendance. That story is true for AU, UK, and UT. A new coach brings new hopes, so attendance naturally rises. At Ole Miss the rise was also a new coach story, only it was the second year of it instead of the first.

As for South Carolina, it was a case of the school finding new ways to cram people in. The official capacity of Williams-Brice Stadium is 80,250, but the average crowd was 81,411 for non-BCS opponents and 82,566 for BCS opponents.

Arkansas is deep in a valley right now, so even the excitement of a new coach couldn't save things. At Mizzou, stadium rejiggering made the capacity of Faurot Field temporarily below last year's average attendance against BCS opponents, so that figure was going to drop. Plus, coming off of a disappointing 5-7 campaign goes a long way to explaining lower attendance in non-BCS games as two of them came in the first two games. Florida's 4-8 record says it all, and trust me, those reported numbers are hilariously high.

The drop at LSU is a bit troubling, though it is not quite what it seems in the case of BCS opponents. That drop is entirely explained by the crowd at the Arkansas game being about 3,000 below the other home games (and last year's average). Playing a 3-8 team will do that.

The worst of it, though, is Vanderbilt. The last three seasons have basically been the glory years for Commodore football. Coming off of a nine-win season and two bowls in a row, the team went to another bowl and won nine games. The fans rewarded the effort by showing up in smaller numbers than last year. Either that, or the school was lying about past attendance gains and decided to be more honest in 2013. Both ways are bad, considering VU has by far the smallest stadium in the conference. Vandy probably wasn't ever going to keep James Franklin if a school as big as Penn State came calling, but it certainly never had a shot with attendance figures like these.

As far as official, announced attendance goes (which is composed of lies), SEC crowd sizes are pretty easily explained in a year-over-year context. But how about the longer term picture? Let's use 2008 as a benchmark just like last year. 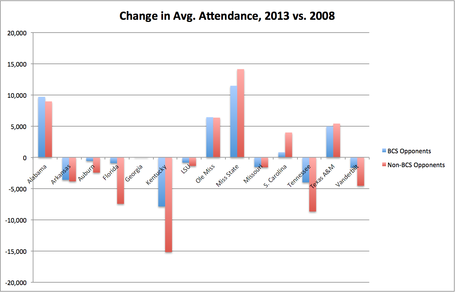 Only five of the 14 programs showed a rise in attendance. Alabama's is due to stadium expansion; the other four were due to improved on-field prospects. Georgia was flat at capacity crowds. LSU's BCS attendance drop I explained above, while Missouri's BCS drop is again due to the 2013 capacity being below the benchmark year's average.

On-field issues explain basically all of the rest of the drops, but one thing is pretty clear. Crowds at cupcake games are falling, and it's worse now than it was last year. These also are only the numbers that schools are willing to own up to; the actual crowds at body bag games are lower than what's being reported in many cases.

Even if pride makes these institutions lie about attendance publicly, someone on the inside must know the actual numbers. There is a reason why Mike Slive has criticized his own schools for loading up on empty calories. Wanting good inventory for the SEC Network is certainly part of that, but it also looks bad when schools are claiming "sellout" wins over Nobody State with a half empty upper deck.

The annual SEC meetings are coming up in May, and that is when the conference will finally make a decision about scheduling with the new 14-team format. The schedules from 2012-15 are "bridge schedules", one-off things that aren't part of a regular rotation. In May, they'll finally decide on whether to stay at eight games or go to nine and what to do about cross-division rivalries in either case.

Most of the schools want an eight-game schedule so that they can play cupcakes as fundraisers. Given the attendance trends, a nine-game schedule might just save them from themselves.