Charting the Revenues and Profits of College Athletics

Share All sharing options for: Charting the Revenues and Profits of College Athletics

The USA Today put out its annual report on the financials of college athletics, this time on the 2010-11 athletic year. I've assembled some of the data into chart form here. As always with these things, only data on public universities is available.

The horizontal axis is revenue. The midpoint is the median revenue for the top 51 revenue producers and is noted on the chart. Why 51? Because Ole Miss ended up No. 51 and I wanted to capture all 11 public SEC schools. The vertical axis is profits, which is revenue minus expenses and subsidies. Here's how the USAT defines subsidies:

The sum of students fees, direct and indirect institutional support and state money. The NCAA and others consider such funds "allocated" or everything not generated by the department's athletics functions.

This chart includes all available BCS conference schools, plus a couple notable others. Click it to make it bigger. The only logos that are mostly obscured are Nebraska, which is below South Carolina and Kentucky, and UCLA, which is below Missouri and Virginia Tech. Also, Indiana is under Washington. 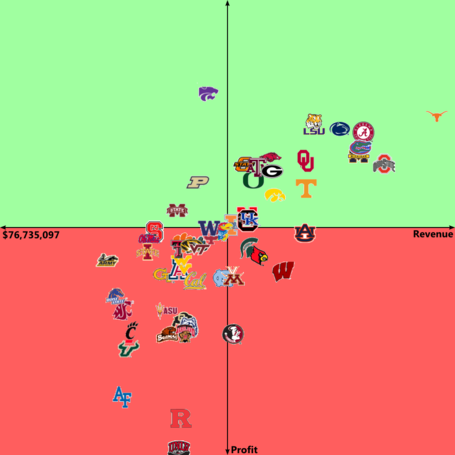 Here are my observations.

Here's a good article explaining some of the vagaries involved with the way these subsidies are accounted for. In short, it almost requires being a CPA to sort out what precisely direct and indirect school support actually means. Take this data as a general guideline only. Until reporting across all schools is standardize (and more thorough), it'll be impossible to get a completely accurate comparison.