Does the SEC Have a Falling Attendance Problem?

Keeping attendance up was a topic of concern at this week's SEC meetings. What does the evidence say about that?

Share All sharing options for: Does the SEC Have a Falling Attendance Problem?

One theme that has been running through this offseason is that of the threat of falling attendance at college football games. It began some time in January, and it continued on into the recent SEC meetings:

Alabama A.D. Bill Battle: "The best way to improve fan experience is to have good games."

Nick Saban has made similar comments, and he was the only head coach of the 14 to vote in favor of a nine-game conference schedule this week.

Tony Barnhart reported a few days ago about some ways that SEC leaders are looking to enhance the game day experience at stadiums. In it, he noted that average per-game SEC attendance has fallen every year since 2008.

You might remember that 2008 was the year that the economy blew up, so that certainly is a possible culprit. However, I wanted to see how exactly attendance has changed over time since then. Perhaps there are some lessons about attendance to pull that aren't simply about the threat of home entertainment systems. I also wanted to see if the grousing about bad attendance at cupcake games was merely anecdotal or had some real weight behind it.

I went through and calculated averages for home attendance figures for each school in each year since 2008. I split them out between BCS opponents and non-BCS opponents. Sorry A&M and Mizzou, but you're not in this because you haven't been SEC schools during the whole span.

It's important to remember that these are announced attendance figures, so many of them are likely to be lies. Schools are notorious for reporting artificially high attendance numbers, but they're all we have to go on. The ADs who publicly worry about attendance have the real numbers, so their fretting may have additional weight we can't know about right now. 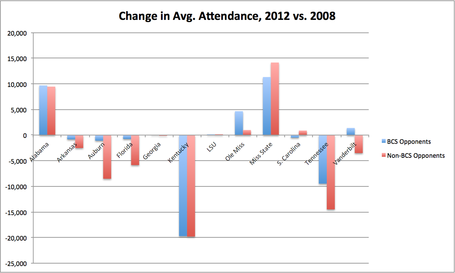 Note: for Arkansas, I only included games at Razorback Stadium for consistency. No War Memorial Stadium attendance figures are included.

Two schools had massive spikes. Mississippi State's is the difference between a perennial bowl contender under Dan Mullen versus the malaise of the end of the Croom era. Alabama's is thanks to a stadium expansion.

As you can see though, two schools are responsible for the vast majority of falling SEC average attendance: Kentucky and Tennessee. UK attendance has been falling steadily since 2009, though the bottom fell out last fall in a big way. Tennessee has also been steadily bleeding attendance over this time, with only a pause in 2010 thanks to a second straight year of new coach excitement (if you want to call it that). Keep in mind that these are the figures that UK and UT are willing to own up to. As these are college football reported attendance figures, they're probably lies.

The worry about falling attendance for bad games is well-founded though. At five schools—Arkansas, Auburn, Florida, Tennessee, and Vanderbilt—attendance fell significantly more for games against non-BCS opponents than against BCS opponents. In addition, Ole Miss's growth was far higher in BCS opponent games than non-BCS opponent games. Alabama's only reported non-capacity crowd in the span was last fall's Western Carolina game. The only school that would appear to buck this trend is Mississippi State (South Carolina's difference is probably just noise), and that's just because it had more room to grow as attendance approaches capacity across the board. MSU averaged about 4,000 more fans per game against BCS than non-BCS opponents in 2008.

I'll have some more to say on this topic later, as the data I collected does have more stories to tell. With that said, it's somewhat misleading to say that the SEC is facing a problem because average attendance per game has fallen over the past five years. The difference is almost entirely attributable to two schools: Kentucky and Tennessee. They have a real attendance problem now. The rest, as far as we can tell from reported numbers (i.e. lies), is that attendance at cupcake games is the main problem going forward.

Having games against overmatched opponents does serve a purpose. They're quite profitable even with sub-capacity crowds, and I know there are some fans who like to use them as a chance to bring their small children to games. It's a bit easier to take your six-year-old to the stadium when the opponent is Florida Atlantic instead of Florida. Wiping them away entirely is not necessary.

Taking one away each year is probably a good idea, though. We'll see if it gets done by expanding the conference slate; coach votes wield absolutely no power in this conference. If it doesn't, and also these trends hold as the economy recovers, I suspect we'll see some schools get more adventurous with at least one more schedule spot.