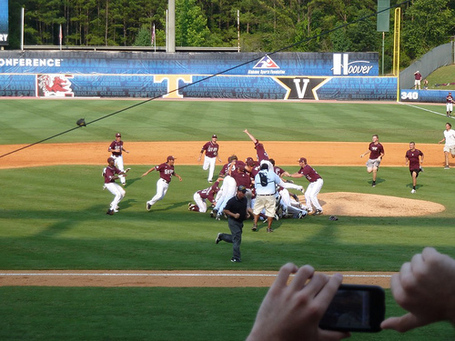 Less than two weeks ago, Mississippi State lost to Central Arkansas -- a team ranked 140 in the NCAA's baseball RPI at the time. Despite having a good end to the season, the Western Division Bulldogs did not at that time look like a team that was about to sweep SEC front-runner Kentucky before running through the conference tournament in Hoover.

But that's exactly what Mississippi State finished doing Sunday, winning its fifth game in six days and wrapping up a 5-1 week in Hoover with a defeat of a Vanderbilt team that might have been the one squad in the country hotter than the Bulldogs. The 3-0 win in the championship game was typical of the way the Bulldogs won most of those games -- with a minimum of flash and a maximum of pitching and defense.

Ross Mitchell led the way on the pitching side, throwing five innings in relief while allowing just five hits -- even if he was pulled after ineffectively facing two batters in the ninth. Chris Stratton, a pitcher who was one of the main reasons Mississippi State was even in Hoover, got the final out with five pitches to strand runners on the corners.

It was a disappointing conclusion to an exciting run by Vanderbilt, which had entered the final regular-season weekend not knowing if it could even put together the winning record required for the NCAA tournament. Instead, after tearing off four straight wins in Hoover, the Commodores stand at 33-26 and might have moved as high as a No. 2 seed in whatever regional the selection committee puts them in.

As for Mississippi State, we know that the strong showing was not enough to get what most Bulldog fans were hoping for -- an opportunity to host an NCAA regional in Starkville. But they have the SEC tournament trophy and are among the teams you least want to face once the tournament gets underway. Neither of those is a bad consolation prize on its own. Together, they're the perfect way to cap off an unlikely season.