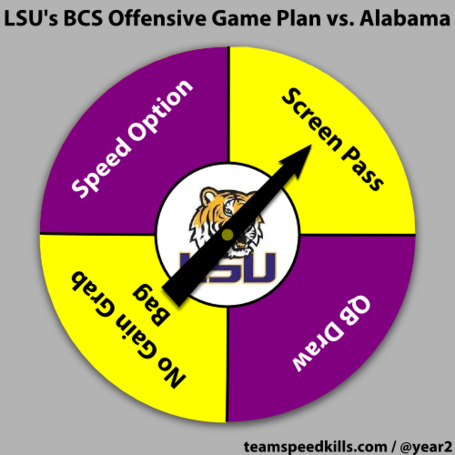 I still don't understand LSU's game plan from the national championship game. Alabama's defense was good, historically good even, but the Tigers did themselves no favors with the way they tried to move the ball in that game. There is no good reason why LSU should have finished that game with under 100 total yards.

At the Senior Bowl, former LSU TE DeAngelo Peterson shed some light on what went wrong:

All right, I'm with DeAngelo so far. But what went wrong?

"The play-calling bothered the whole offense... I feel like the coaches didn't use the game plan. They were doing stuff that we never did all year... In that game, Russell played like two plays, Rueben had like one ball, I had one ball. I think they went away from the game plan. ... I feel like if they had went to the game plan and given the playmakers the ball, they would have done something with the ball."

According to Shepard himself via his Twitter account, he participated in three plays. Randle had three catches for 13 yards, and Peterson had one catch for seven yards.

Peterson's account lays the blame on the coaches, which is where most post-game blame went to. That Les Miles never subbed Jarrett Lee in for Jordan Jefferson will be one detail from the game that will never be forgotten. The coaches kept trying to stretch the field horizontally, something that was never going to work against a defense as fast as Alabama's.

And speaking of doing stuff they never did all year, the first time LSU ran its signature toss ISO running play was with about eight minutes left in the game. That's the Tigers' bread-and-butter play for the whole offense, much less the rushing game. When they had one bonus play to beat Tennessee in 2010 after the Vols had 13 men on the field, they ran that play and won. Why it took so long to run the play that they do best defies explanation. It's not a bad idea to try to mix in new things for a bowl game to surprise the opposing defense, but you never abandon the basics in doing so.

How much blame to lay on Miles and how much goes on Greg Studrawa and Steve Kragthorpe is still an open question. Everything ultimately goes through Miles, but he doesn't actually call all the offensive plays. I can remember seeing some comments after the game on Twitter from Louisville fans telling everyone that now we can understand what they went through for three years, so maybe that's a clue.

Regardless, LSU's offensive coaches lost the game for the team more than the players did. It's enough to make me think long and hard about LSU's presumptive place near the top of the polls for next year.