The SEC Announces Missouri as 14th Member. But Not Really

Share All sharing options for: The SEC Announces Missouri as 14th Member. But Not Really

It was kind of fun while it lasted. For about 15 or 20 minutes Thursday night, the SEC was a 14-team league, as word spread like wildfire over Twitter about the existence of an official Web page that said the Tigers had joined the SEC. A page that looked something like this. 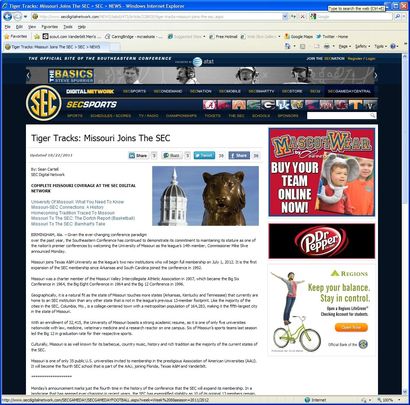 We've got another screen-shot of a different page -- this one on the connections between the SEC and Missouri -- below the jump. And Year2 has helpfully cataloged all the pages as PDFs in a file you can download here. Meanwhile, we have to wonder what all of this means, if anything, in the context of the bizarre conference realignment saga and the SEC's courtship of Missouri's place in it. 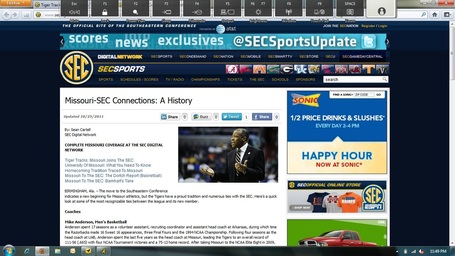 On one level, it means absolutely nothing. We already knew that the SEC was recruiting Missouri and that Missouri was interested in joining the conference as soon as it could untangle itself from the Big 12. None of that's new.

What might or might not be new is the timing of all of this. The page is dated Oct. 22, one day after the Missouri board of curators voted to give Chancellor Brady Deaton authority to make all conference decisions for the school. But it was clearly not the kind of thing you put together in 24 hours, not unless you're under an immense amount of time pressure. So how long exactly had the SEC been working to get Missouri into the fold, and how far along were things when the board of curators voted? In fairness, Deaton had been given the go-ahead to look into other opportunities as far back as Oct. 4, and the New York Times reported that Missouri's move was "imminent" on Oct. 17.

The other curious thing is the repeated references to "Monday" on the front page of the section. So was the plan for Missouri to be added to the conference this past Monday, Oct. 24? Or is there a plan to usher the Tigers into the SEC this coming Monday, Oct. 31? Maybe it's just a filler day that can be changed whenever the announcement happens. It's worth noting that Monday might also be Deaton's last day in the country until Nov. 10.

Don't look for the SEC to answer any of those questions any time soon. Whether or not the league did anything incorrect here -- more on that in just a moment -- this is an embarrassment for the conference, which has so far prided itself on the discretion with which it has carried out realignment. This was sort of Big 12-esque, which is something that the SEC would hate to hear any of us say.

That said, I'm not sure the existence of these Web pages was a mistake, per se. There are ways to essentially hide a Web page while still having it be accessible -- if you know how to get there. There's a chance that someone stumbled upon pages that were up, but were only supposed to be linked to and "activated," for lack of a better word, if and when an official announcement happened. It's still embarrassing and still raises all kinds of questions, but in that case it goes from being an overt blunder to being an oversight.

One of the questions it raises is about Tony Barnhart, one of the more respected columnists in college football in general and the SEC in particular. One of the pages includes aN interview with Barnhart in which he clearly talks about a move to the SEC by Missouri not prospectively, but as if it has already happened.

Tony seems to forget that there are other journalism schools in the SEC, including one at my alma mater and of which I am a proud graduate, but we'll set that oversight aside for the moment. There's absolutely nothing wrong with anything in the interview that Barnhart says -- if he had said it after Missouri is introduced as the 14th member of the SEC. Barnhart is a columnist and a television host who is known to have close ties to the SEC office, and there's nothing inappropriate or unethical about him voicing his opinion.

Here's where I have a problem with this: We now know that this interview was obviously conducted before Missouri was officially announced as a member of the SEC. (Duh.) Even as a columnist and a TV host, doesn't Barnhart have the obligation to tell his viewers and his listeners if he has first-hand knowledge that the SEC has already made preparations for announcing Missouri as the 14th member -- especially if he's taken part in those preparations? There is a chasm of difference between taking off-the-record information to help you do your job and fully participating in the SEC's spin job for Missouri's arrival, while saying nothing about it to your readers and listeners. Barnhart knew that the SEC has gone far enough to begin serious preparations for the announcement, and yet he's been reporting and punditizing on the topic as if he didn't know that.

And that doesn't even get into the entire problem of the fact that this isn't just an interview. This is a part of a carefully choreographed public relations campaign by the SEC. To be clear, there's nothing wrong with the conference getting its ducks in a row; it would have been almost criminally negligent for the league not to do so. Even as an opinion journalist, this should have raised all sorts of ethical questions for Barnhart. This isn't like TV anchors for MSNBC giving money to their favored candidates; this is like them writing a press release for the candidate in question.

Sure, we all knew that conference realignment is not exactly the place for saints. But we've already seen what happens when one media outlet allows its contracts and entanglements to drown out its objectivity and news judgment to help a business partner make its case. That's also something that happens in the Big 12, and something that the SEC should never try to copy.