Will I Sing "Yea, Alabama"? The Tide Finds Out What a Ute Is

Share All sharing options for: Will I Sing "Yea, Alabama"? The Tide Finds Out What a Ute Is

I made a deal last week with my Tide-loving sister, who's convinced that Alabama is going to blow out Utah in the Sugar Bowl this year: If Alabama wins by more than two TDs, I will sing "Yea, Alabama" on the inaugural broadcast of Team Speed Kills Now, scheduled for 8 p.m. Wednesday. (Don't worry, I'll warn you before I break out into song.)

To be clear, I still expect Alabama to win the Sugar Bowl and do so comfortably. But even before the suspension of Andre Smith, I still had a notion that anyone expecting Utah to crash back to Earth Hawaii-style was probably wrong. 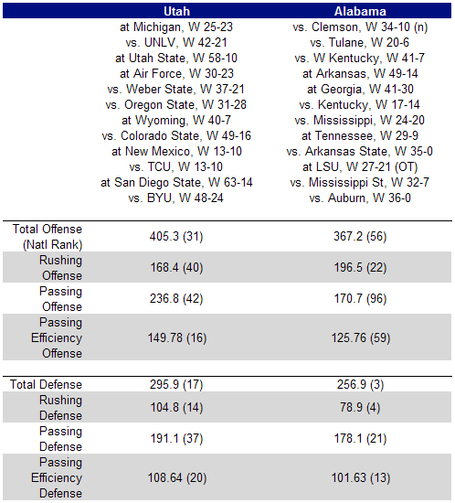 (W-L chart does not include Alabama's 31-20 loss to Florida in SEC Championship Game.)

It's tough to weigh the two teams' performance during the year against each other. The Mountain West Conference is the best mid-major out there, and is likely better than some BCS conferences. But it ain't the SEC. The Michigan win looks worse than it did back at the beginning of the season, while the Oregon State and TCU victories have aged well.

Likewise, Bama's opening waxing of Clemson looks worse than we thought it was, and the LSU loss was losing value rapidly before the Bayou Bengal's victory against Georgia Tech earlier this week. But the Georgia win, the one that really put Alabama at the forefront of the national title debate, is still strong.

RB Glen Coffee and Co. should do well enough, even without Smith, but the loss of the Outland Trophy Winner is going to make it harder against a good Utah run defense. QB John Parker Wilson should only have to do enough -- if, though, he's force to do more, WR Julio Jones will be the key player in the game.

On defense, the Tide should be able to pressure Utah. It won't be Hawaii-vs.-Georgia, but even the Utes know that Terrence Cody isn't exactly a MWC-caliber player.

Ludwig feels confident his team has the offensive weapons to move the ball on the Tide, but he admits the Tide has some defensive weapons he isn't sure how to prepare for, such as 365-pound All-America tackle Terrence Cody.

"He's different than any we've seen," Ludwig said. "I'm anxious to see how we match up inside against that young man. We'll try to work the ball on the perimeter a little bit, but Alabama's also very fast. There are some unique challenges that that individual presents against us."

Utah QB Brian Johnson can throw the ball and run if needed, and Utah has plenty of other weapons. But they're not used to playing a defense as tough as the Tide's.

If Smith were there, this game would have a better chance of turning into a romp. But he's not, and the Tide will suffer slightly because of it. Alabama 31, Utah 17